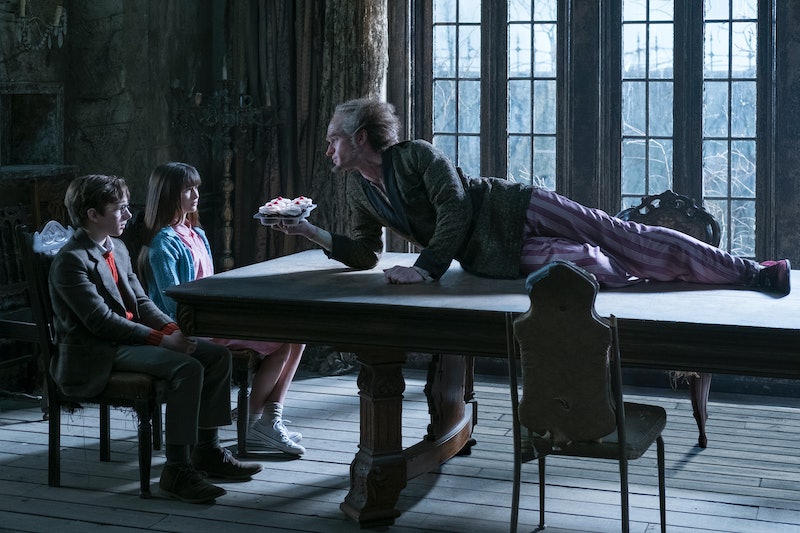 Some very distressing things are about to happen on Netflix. The first season of A Series Of Unfortunate Events will arrive on Jan. 13 — Friday the 13th, a tremendously unlucky day. But then, luck never has been kind to the Baudelaire children from Lemony Snicket's beloved series of darkly comic books. Orphaned by a terrible fire, the three youngsters are sent to live with their openly nefarious new guardian, Count Olaf. Neil Patrick Harris plays the evil benefactor in this Netflix adaptation of the novels, and it's going to be incredible fun to watch him hatch a series of schemes intended to strip the children of their inheritance. There are 13 books in Lemony Snicket's saga and only eight episodes in the show's first season. How many A Series Of Unfortunate Events novels is Netflix adapting in this premiere block?

When the first full-length trailer for the show debuted to the nostalgic glee of slightly sadistic readers everywhere, Variety reported that the first eight episodes of the series will cover the first four books: The Bad Beginning, The Reptile Room, The Wide Window, and The Miserable Mill. Each novel will have two episodes devoted to it, which is encouraging for fans who would prefer not to see their favorite bits from the books cut for time.

Has it been a while since you stuck your nose into one of Lemony Snicket's books? Here's a refresher on some of the miserable plots awaiting those ill-fated Baudelaires. Mild spoilers for the books below!

Violet, Klaus, and baby Sunny Baudelaire are deposited with Count Olaf, though his rambling house of nightmares doesn't seem like a fit home for children. Olaf wastes little time before making his first grab at the children's fortune, which is to be bequeathed to the eldest when she's 18. He invites his theater troupe to a dinner cooked by his young charges and urges Violet to pose as a bride character in one of their theatricals where he'll play the groom. Will the Baudelaires see through his trickery before it's too late?

Out of Count Olaf's clutches for the moment, the orphans are shuttled to the home of their distant relative, "Uncle Monty." Though they warm instantly to Monty's kindness and his insistence on including them in his snake research, the peace doesn't last. Monty's new assistant Stefano bears more than a passing resemblance to Count Olaf and has no intention of allowing the children to go on that expedition to Peru.

In the third novel, Violet, Klaus, and Sunny are installed in the home of their intensely phobic Aunt Josephine. All is well until the children find the open "wide window" of the title and a suicide note next to it. In it, Aunt Josephine writes that she'd like to leave them in the care of the aptly named sailor Captain Sham.

Child labor laws do not apply in this series. And even a job in a remote mill has to look a lot better to these poor kids than the being anywhere near Count Olaf. It must just be a coincidence that Paltryville's optometrist lives in a building that seems to match the eye tattoo on Olaf's ankle perfectly and that Klaus doesn't seem to be quite himself after his appointment.

As you can see, there's quite a lot of wretchedness ahead. And with Season 1 of A Series Of Unfortunate Events tackling only the first four books in the series, that leaves plenty of Lemony Snicket material for future seasons.

More like this
The First 'Percy Jackson & The Olympians' Teaser Comes With An Ominous Warning
By Grace Wehniainen
Viserys’ Fate On 'House Of The Dragon' Could Differ From The Book In This Surprising Way
By Grace Wehniainen
Stanley Tucci Is Next Level In The BBC's 'Inside Man' Trailer
By Sam Ramsden and Sophie McEvoy
How A Location Blunder Changed The Outcome Of 'The Capture' S2.
By Darshita Goyal
Get Even More From Bustle — Sign Up For The Newsletter