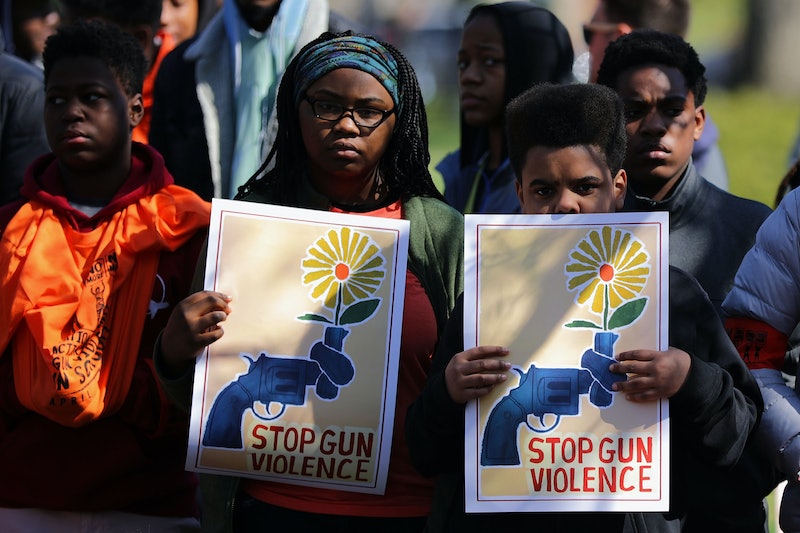 According to a statement on the official website for organizing National Gun Violence Awareness Day, orange is the official color because it is "what hunters wear in the woods to protect themselves from harm. Orange is a bright, bold color that demands to be seen."

But there's even more history to the reason why the color carries such significance for the day and that leads to a heartbreaking incident of gun violence in Chicago five years ago. In January 2013, Hadiya Pendleton — only 15 years old at the time — was fatally shot in Kenwood, Chicago. Pendleton's friends wore orange in memory of the young student. It's the same reason why orange is a poignant color for Wear Orange Weekend.

"Pendleton’s friends wore in her honor after she was shot and killed in Chicago at the age of 15 — just one week after performing at President Obama’s second inaugural parade in 2013. After her death, her friends started to Wear Orange to raise awareness about gun violence," according to a statement on the Wear Orange website. The bright, attention-grabbing color, the website says, "expresses our collective hope as a nation — hope for a future free from gun violence, where our movie theaters, our concerts, our places of worship, and our schools are free from gun violence."

Five years may have passed since Pendleton's death, but her untimely demise continues to galvanize anti-gun violence activism across the country. In more recent cases, the horrific school shooting at Marjory Stoneman Douglas High School in Parkland, Florida, sparked protests across the United States.

School shootings have been happening with more frequency. In Santa Fe, Texas, where 10 people recently died in a school shooting, New York Times said that the reaction among some was that of being "unsurprised." Some observers may interpret this lack of shock as people becoming used to the country's extremely lenient gun laws, aggressive pro-gun ownership messages by the National Rifle Association, and perhaps most importantly, reluctance shown by lawmakers to tighten gun access.

In photos taken of the marches, rallies, and walkouts protesting gun violence, orange is the color that continues to make repeated appearances, including signs, mugs, hoodies, shirts, and more. Honoring the memory of Pendleton, a statement on the Wear Orange website said, "What started with a group of friends on the South Side of Chicago has turned into a nationwide movement to honor the 96 lives cut short and the hundreds more injured by gun violence every day — and to demand action."

The number 96 here is a reference to a key finding from the non-profit organization, Brady Campaign to Prevent Gun Violence. In 2015, the organization released a Key Gun Violence Statistic report and reported that "Every day, 96 people die from gun violence." The center broke down the gun deaths down in 34 homicides, 59 suicides, one unintentional death, one death caused by "legal intervention," and one death where intention was not known.

On top of that, the organization reported, "Every day, 222 people are shot and survive." The organization broke those incidents down in attacks, surviving a suicide attempt, legal intervention, and unintentional shootings.

On the first weekend of June, students, activists, and just about anyone concerned about gun violence will participate in Wear Orange Weekend in various cities across the country. The good news is that if you're interested in learning about a possible Wear Orange Weekend event near you, you can check the populated map on the Wear Orange website.