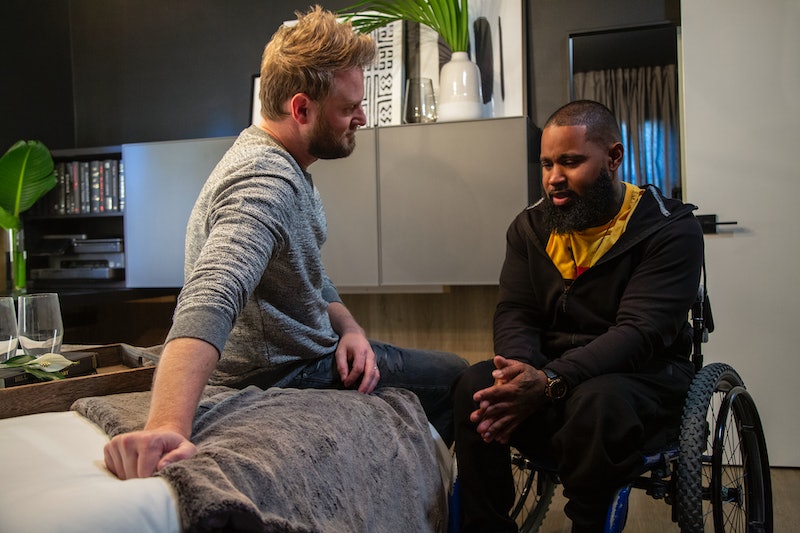 Queer Eye features a lot of deserving heroes, but one of the most inspiring is undoubtedly Wesley Hamilton, a Kansas City resident we meet in the newly released fourth season. Initially, he was headed down a bad path in life, but a catalyzing experience led him to turn things around: at 24, he was shot in the spine during an argument and became paralyzed. That day changed everything.

"I'm a firm believer that we all get days of rebirth," Wesley tells Bustle. "I feel like I was reborn the day I was shot."

After experiencing a period of depression, Wesley decided to overhaul his mindset, investing himself in fitness and nutrition and eventually founding Disabled But Not Really, a nonprofit organization that helps people with disabilities work towards their wellness goals. Now, he feels his purpose is to "empower people" — something he says he wouldn't have been able to realize if he hadn't been shot.

"I never loved myself before I got in this position," Wesley explains. "I truly love myself now. I believe that I'm truly free. So anyone who wants to know how to be where I am? You have to free yourself from any limitations or barriers that you're putting on yourself mentally."

For Wesley, one of those barriers included forgiving the man who shot him, which he did on-camera with Queer Eye culture expert Karamo Brown in one of the most intensely emotional moments on the show thus far. Wesley says that he'd already gone through "a process of forgiving" the man before meeting back up with him, and that "forgiving him was actually me forgiving myself, and taking accountability of my actions that took place that day, and learning how to never just blame people. Because we all have choices. You know, he had a choice to shoot me, but I had a choice to stay there or leave." Wesley affirms that after that conversation, he feels "completely free" and "fearless."

As is evident on his episode, Wesley is a strong proponent of positivity and forgiveness, a mindset that he cultivated for years and was able to hone further through the help of the Fab Five. But the biggest benefit from being on the show? How much convenience and comfort he now enjoys, which frees him up to focus on the things that really matter: his family and his organization.

"It is amazing the amount of comfort that I feel inside my home now," Wesley says, praising Bobby Berk's wheelchair-accessible design. "It has provided me the opportunity to buy a barbecue grill! I've had a couple of cookouts, inviting friends and family ... for like the six years that I stayed in this home, I'd never really invited people over. They made it comfortable. And they made it in a way where now me and my daughter can actually grow together."

Wesley was particularly excited about the clothes Tan France picked out, most of which were tailored to accommodate the wheels on his wheelchair. "I tell you right now, after I got that, I scheduled a photoshoot right away," Wesley laughs. He also reveals that in the last couple of months, he's actually signed on with a modeling agency. "I feel like I have swag now ... and I just feel like now I have the confidence every way around to be that presence that speaks value without saying a word."

As for Disabled But Not Really, the foundation has made huge strides and shows no signs of slowing down. "We're doing great," Wesley says, adding that they recently partnered with a gym facility to become more inclusive. Before, athletes with disabilities had to just work with the space and machines made for non-disabled gym-goers, but through the partnership, Wesley was "able to create a fully inclusive part of the gym that speaks to our athletes and allows them to gain the confidence to come into a setting and just be independent and work out."

And Wesley has even bigger plans coming up. He's taking a one-day break for the Queer Eye premiere, but then he's heading to a Special Olympics event to encourage and network with the athletes. He even sees a global expansion in Disabled But Not Really's future.

"We're actually getting ready to present to the world a concept of a state-of-the-art, fully inclusive business facility that we've been working on," he says. "Kansas City would be the first place that it would be, but it's a model that can be scaled even on a global level to speak to inclusion, but in a way that never makes someone feel different. The mission that we're on right now is just going to get bigger and better."

And if at the end of all this, Hamilton happens to end up on, say, the front page of GQ? "That's my goal," he laughs, stressing the importance of representing not only a young black man who has overcome adversity, but representing what it means to be a successful person with a disability. "The possibilities are endless," he says. "And I'm just ready to climb to the top and inspire the world."