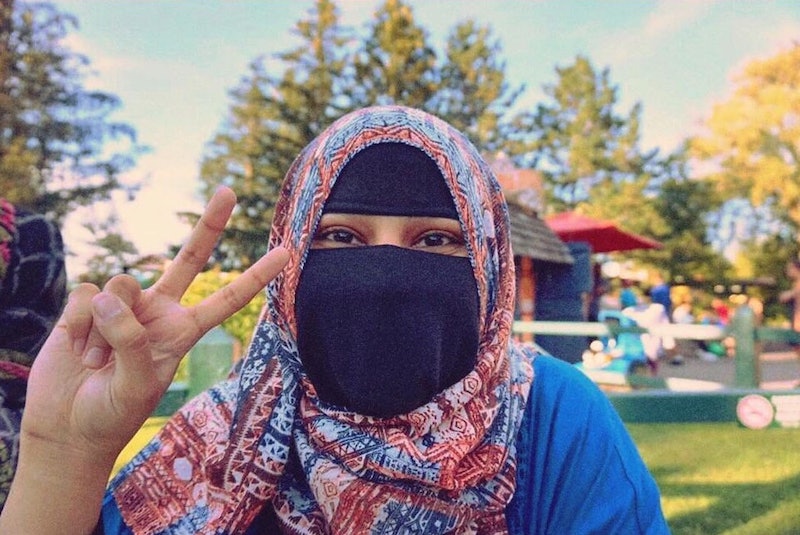 Writer Aima Niqabae tells Bustle’s Iman Hariri-Kia about her faith and her feminism in honor of Muslim Women’s Day.

If I say that I’m a feminist, or that wearing the niqab empowers me, there are always going to be nay-sayers from both sides of the spectrum — including members of the feminist movement — who say “well actually, you’re oppressed.” They are invalidating my experience as a Muslim woman, by using the narratives of women who have been oppressed presently and historically by their tyrannical governments. They are suggesting that if I don't take off my niqab, I’m actually supporting those people’s oppression. That's not true.

I’m not ashamed of my body. I choose to dress a bit more modestly for religious reasons. There are so many women who like to dress modestly and not wear form-fitting clothes — and that is their decision. Your autonomy can mean something entirely different, depending on where you live and who you are. For myself, my autonomy is directly related to my religious identity. For some, perhaps it is their sexuality. I believe that to have that freedom — to express and be what you will — is incredibly important to the feminist movement.

Intersectional feminism means that you believe that women — all women — should be able to express themselves, and that there shouldn’t be one particular standard. We are not all the same. We aren’t one great big blob — we each have our own unique experience. We are complex, and we each have our intersectional identities beyond just being a woman.

"All Muslim women are very different. We are South Asian, Black, Arab, and more. We all have different backgrounds."

Too often, the media paints women who wear the hijab or the niqab as being subdued, or subjected to certain practices. This takes away our voice, even though we have been speaking out for a very long time on these issues.

In elementary school, I had a really great teacher. She was the only woman in the entire school who didn't shave her armpits. Every single other teacher had clean armpits except for her, which made her so memorable to me. To her, every woman’s empowerment looked different. We were young, but she taught us what it means to be a feminist — and it influenced how I see myself today. What empowers me might not necessarily empower someone else. But I would never use their experience to invalidate my own.

A popular misconception these days is that Muslim women are only trying to break stereotypes or make a political statement, but in reality, we are speaking out on issues that we are truly passionate about. We are just trying to be who we are as individuals. If a girl wearing a hijab goes rock climbing, she is not doing it for the shock value — she actually just enjoys rock climbing. It has nothing to do with breaking stereotypes. But the way these actions are often portrayed, it is as if all Muslim women are rallying together and trying to prove convention wrong. It’s not like that. We’re actually just trying to change the way we are being portrayed. It’s time to reclaim our own narrative.

All Muslim women are very different. We are South Asian, Black, Arab, and more. We all have different backgrounds. There are also many kinds of Islamophobia. Gendered Islamophobia is a particular type that targets Muslim women specifically, and it’s not talked about enough. I also think that when we talk about Islamophobia, we rarely talk about internalized Islamophobia. It starts and spreads within our own communities, and it’s time to start the conversation and put an end to it — once and for all.