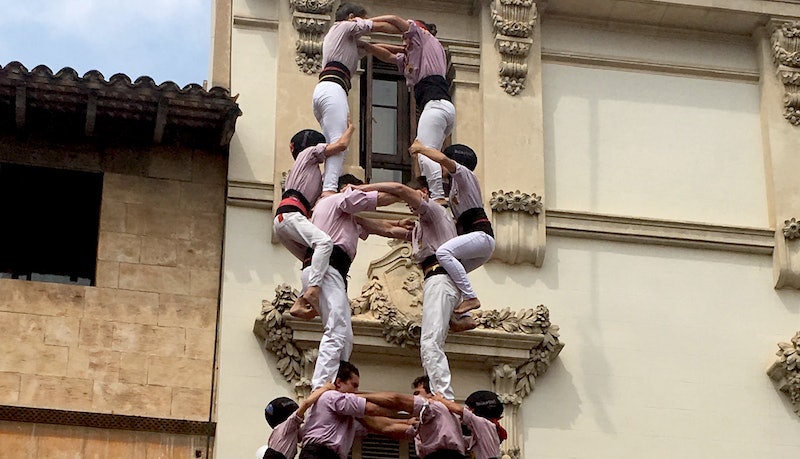 I'm standing in a town square in the small city of Vilafranca del Penedès in Spain. It's time for Fiesta Mayor, the city's annual local heritage festival that happens every August. The festival celebrates the city's rich culture and is marked by dances and performances of all kinds. But right now, everyone is jam-packed together to see the main event: Catalonia's castells, massive human towers made up of hundreds of people who have climbed on one another to build castles that are multiple levels high. Today the castellers are joined by a camera crew from National Geographic's show Explorer, a docuseries that spotlights different stories and events from around the globe. The production team is in Spain to cover one group of castellers, the Minyons, for its Jan. 7 episode, which airs on the National Geographic channel at 6 p.m. ET.

The atmosphere in the crowd is tingling with excitement, but also nerves. It's dangerous what the castellers are about to do. Though the towers are supported by a wide base of people helping to hold each level steady, falls do happen. And when children as young as seven are climbing to the top, everyone gets nervous. After the Minyons fall twice, the mood gets even more tense.

The Minyons aren't the only castell group performing at the festival. Four nearby teams have showed up to demonstrate their tower-building skills too. The festival lasts for five days, with the castell performance serving as a highlight of the week. Even outside Vilafranca, castells are a huge part of Catalan culture. There are more than 100 teams in different towns throughout the country, and each team is made up of the town's citizens. The Minyons are from Terrassa, which is about an hour outside of Vilafranca.

Like the other teams, the Minyons are comprised entirely of volunteers. It's a tradition, not a sport, so there are no winners or losers when it comes to building castells. Without prizes or scoreboards, the castellers' only goal is to succeed at building their tower to share the centuries-old tradition and keep it alive.

So, even when the Minyons suffer two falls, the castellers' sheer tenacity to press on is awe-inspiring. I left Spain with a renewed sense of empowerment. I had seen with my own eyes what true collaboration could be: Sticking things out as a unit, whether you succeed or fall.

I could talk about it all day (and have been since I saw the castells in August), but there's really nothing like seeing it for yourself.

The castellers rehearse year-round, since they perform at many events throughout the year, not just the Fiesta Major. During rehearsals, they take safety very seriously. Young children wear helmets, it's absolutely silent during builds to help with concentration, and nets are used to practice new formations before taking them into the open courtyard. After a few practice climbs with the net, castellers will then rehearse their new formations outside.

The Castellers Rehearse In A Courtyard So They Can Climb High

Explorer producer and National Geographic correspondent J.J. Kelley tells Bustle that the Minyons practice three or four times a week — often well past midnight. "These people are so passionate," he says. "They’re not getting paid to do this. In the United States, if you form [your own] basketball team, it might last a year; it might last a couple of years. [The castellers] have been doing this for 250 years."

The Support Base Is Filled With People

The team is very receptive to welcoming new members, and even let Explorer host Phil Keoghan (right, circled) get in on the action. Whether you're a base member or a climber, "everybody has a place in the castell," one member tells the Explorer cameras, because every role is crucial to the castell's success.

During the castell practice, I witnessed all the moving parts of building these towers. Each one requires dozens of people in the base, all pushing forward with their hands to steady those who climb. There's also someone in charge of shouting out directions, and other members who observe any flaws in the construction so it can be done better the next time. As for the climbers, the first couple of levels are usually comprised of strong-shouldered men who can support the weight of the following levels. Teens and women fill the uppermost levels, and young children climb to the top since they're the lightest and most agile.

What was cool to see is that the base was made up of so many different people. There were men and women, young and old filling the wide bottom layer. There really is room for everyone in the castell.

The Group Camaraderie Is As Strong As The Base

In between each tower build, old friends could be seen catching up, hugging, and laughing at inside jokes. I love this tender moment I caught between seven-year-old climber Queralt and another member of the team.

Even on competition day the younger kids could be seen coloring between builds. They may take their roles seriously, but the team members also know the importance of having fun together as well.

Castellers have detailed plays and everything. Each castell comes with a map that shows a deconstructed version of the tower and lists every person who is supposed to be part of it. That way everyone knows exactly where to go when the building starts, and which tower they should be constructing next.

Each Tower Starts As A Mass Of People

And then it becomes a formidable stack of people. The Minyons' team is made up of 500 people, and each tower can easily be made up of more than 100. They stand close to 50 feet tall depending on how many levels they include.

Despite the sheer amount of people involved, and the chaos of the audience watching at the festival, each team builds relatively quickly. The towers are usually built and deconstructed in about 15 to 20 minutes. After one team completes a tower, the next team goes, and so on, until each team has three to four towers under their belts.

Watching The Kids Climb Up And Slide Back Down Is Amazing

Building the tower is only the half of it. The teams also have to deconstruct it without falling.

And When They Fall, It's Devastating

"When the first [castell] crashed, I was like, 'Oh, wow. That was real,'" Kelley says. "And when we were five feet away from it, you see people bounce off each other."

Knowing how devastating a fall can be both to morale but also injury-wise, other teams would often race to help catch tumbling people before they hit the ground. There is no animosity between castell groups. They all want to see each other succeed and share their tradition with the world.

But When They Do Make It, It's A Beautiful Sight

Even after two major falls, the Minyons got back up there again and perfected their castell on their third try — one of their very last allowed attempts.

It's So Rewarding To See The Triumph On The Castellers' Faces

This is not an easy thing to do. No one is getting paid, practices are long and frequent. The risk of injury is high. There are no prizes to be won. But there is the pride of knowing you're keeping your country's traditions alive.

Kelley says that putting together an Explorer season, which is filled with tons of fascinating stories like this across the globe, is always a challenge. Much like the castellers must be sure-footed to build their towers, Kelley says the Explorer team had to weave the different stories together in the right way so that each episode is "not too serious, not too light, not too much of this continent, [etc.]" He adds, "It is an incredible balancing act."

But the result is a series that tells stories from around the world, exposing you to new cultures and ideas. "It is a unifying force," Kelley says. "It’s not something that divides us; it’s something that brings us together and I just think that kind of healing for the planet is so awesome."

So, no, not everyone can climb to the top of a castell, but everyone can learn from what they represent — the sheer power and beauty of humans coming together and uniting for a common goal. And if that's not a lesson to start off 2019 with, I don't know what is.