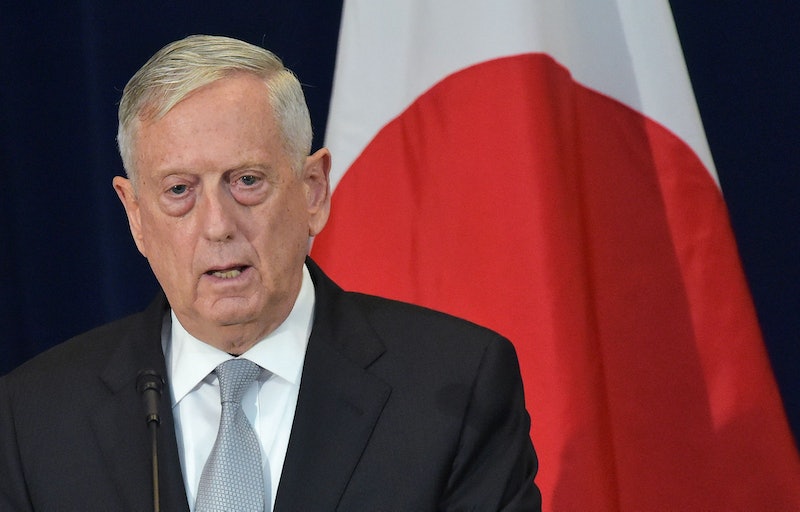 Last week, Trump's secretary of defense made an impromptu speech at a foreign military base lauding U.S. troops for their dedication and service, but below the surface, his remarks seemed to signal some frustration with the way the country is being run. Now, the video of Gen. James Mattis' speech is being widely shared for a couple of significant reasons in particular.

It doesn't take much digging to find disparaging remarks about the president. Trump is far from the most popular guy in America right now, and the way many people publicly discuss him and his actions shows that. But it's a different story when those negative comments come from within the administration. Mattis, who holds one of the most powerful positions in the federal government, was willing to make his doubts about the administration public, even if he did so in a veiled way. And that should give rational-thinking Americans pause.

In the video, Mattis gives the crowd an encouraging pep talk, and goes on to call them a "great example of our country." But when listening to the four-star retired general tell these military men and women that the country is facing problems and that they need to "hold the line" until respect and order can be restored, it's hard not to think that Mattis is referring to his boss.

On its surface, Mattis' speech, which was reportedly impromptu, was rousing, heartfelt, and seemed appreciated by the men and women in attendance. It credited their hard work and devotion to the protection of the United States. But Mattis also touched on troubles at home, signaling that he felt there were some issues in the deteriorating social fabric of America that need tending to.

You’re a great example for our country right now. It’s got some problems. You know it and I know it. It’s got problems that we don’t have in the military. You just hold the line, my fine young soldiers, sailors, airmen, marines, you just hold the line until our country gets back to understanding and respecting each other and showing it, and being friendly to one another, as Americans owe to one another because we’re so doggone lucky to be Americans.

He also spoke about America's two greatest powers: inspiration and intimidation. The U.S. military had the intimidation part on lock, he told the troops. However, he said that inspiration needed to be recovered. And while he doesn't mention anyone by name, the person most usually tasked with inspiring a nation is the president.

While he doesn't specifically mention Trump or the administration, the events in Charlottesville preceded the speech, and the controversy over Trump's reaction and flip-flopping psuedo-condemnation of the violence in Virginia seemed like a potential catalyst for Mattis' off-the-cuff remarks.

For many pundits, Mattis is seen as one of the voices of reason within the administration, tasked with keeping Trump's most reckless instincts in check. But the fact that Mattis is willing to discuss these issues outside of the confines of the White House signals that the problem is perhaps too big for even him to handle.