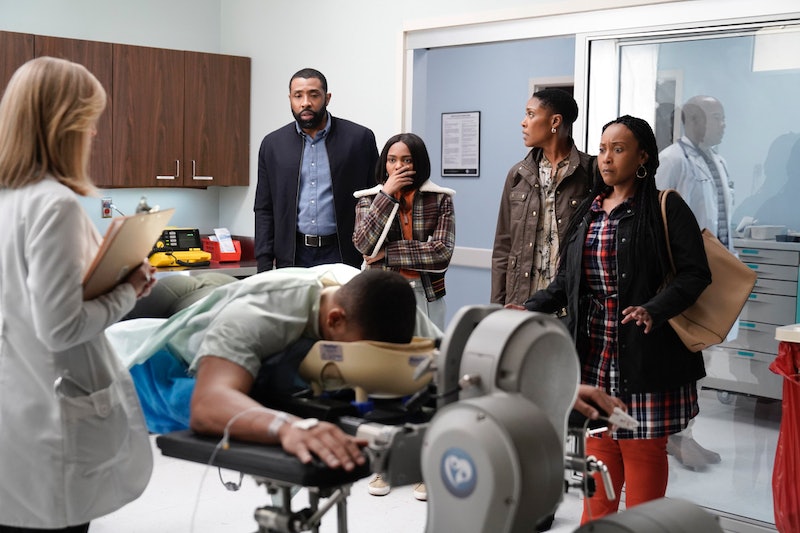 Spoilers ahead for Black Lightning Season 2, Episode 11. His life may have come to a heartbreaking end, but Khalil’s death on Black Lightning will continue to affect the show. Yes, his story is over, but his loss could change everything for Freeland's super heroic family.

In Black Lightning's Jan. 28 episode, Khalil is fighting for his life in the hospital with his mother and the Pierce family by his side. Obviously, Jennifer is an emotional wreck. She pleads desperately with her mother to place him in a pod so they can save his life at a later time, and while Jennifer says she can feel him dying, Lynn decides that letting her use her powers might be life-threatening for Khalil.

Instead, Lynn summons her medical team, but the toxins unleashed in Khalil's body after Tobias ripped out his metal spine are too strong. So, Jennifer brings him into her subconscious to share one last dance before his life slips away.

Not only was it a devastating moment for Jennifer — and for fans — but it will have a major effect on the remainder of Season 2 in several ways. The biggest influence will undoubtedly be on Jennifer as she continues her journey toward becoming Lightning. There has been constant anticipation of Jennifer suiting up alongside her dad and sister, especially with the revelation of her costume on social media.

Now, things are definitely going to kick into action because she has a vendetta against Tobias Whale for killing Khalil. Previews for the next episode reveals Jennifer's thirst for vengeance, which won't sit well with her dad. Jennifer probably blames her parents for Khalil's death, especially since it was their idea for him to go to the authorities. She also has an ironclad will and incredibly strong powers that will push her into action. And, if she goes for Tobias and fails, he will figure out the true identity of Black Lightning.

Furthermore, Khalil managed to tell Jefferson some important information about Tobias before his death — including his home address and how his operation works. Fans didn't get to see this on-screen, but it will surely be beneficial when it comes to Jefferson, Gambi, and Henderson's plan to work in tandem to take down Tobias via the legal system. However, Khalil's parting words left Jefferson conflicted about what kind of justice Tobias deserves. Khalil wanted Black Lightning to kill Tobias, which Jefferson immediately refused to do, but Khalil's impassioned speech about how the system failed Jefferson's father, Reverend Holt, and himself was all facts. Will Jefferson decide to do the unthinkable and kill Tobias? Anything is possible.

This death, alongside Rev. Holt, will also have a ripple effect on an already hurting community. There have been metahumans running around as well as senseless deaths from Green Light, and now they have to deal with losing a young man who had a promising life. Khalil's mother will certainly speak out against Tobias, which may put her on his radar for potential harm. And now that Tobias is conjuring up a meta-army, it's going to be an all-out war on the streets of Freeland.

Overall, Khalil's death marks a major turning point for the series. How will the residents fight to save other kids from a similar fate? What will Jennifer do next? Can Jefferson really take Tobias down the "right" way? And will the Pierce family splinter apart during this time of trouble? Everything will be uncovered as Black Lightning Season 2 progresses.

More like this
Nicola Coughlan Shared A Lady Whistledown Excerpt From ‘Bridgerton’ Season 3
By Grace Wehniainen, Alyssa Lapid and Sam Ramsden
This Episode 6 Moment Foreshadows Viserys' Fate On 'House Of The Dragon'
By Grace Wehniainen
A New 'And Just Like That' Table Read Pic Confirms A Key Character's Return
By Jack Irvin and Grace Wehniainen
Watch The Thrilling Teaser Trailer Of 'Shadow And Bone' Season 2
By Gretchen Smail and Jack Irvin
Get Even More From Bustle — Sign Up For The Newsletter