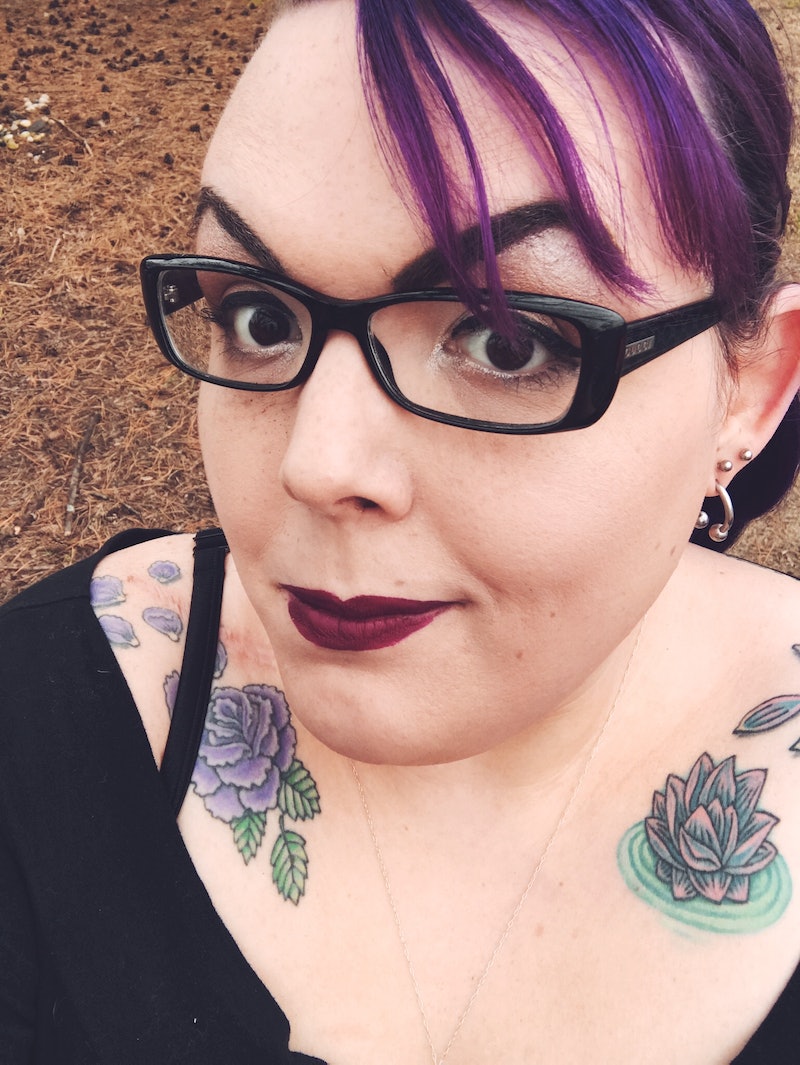 I'm going to let you all in on the big secret of what exactly trans women are doing when we "invade" the women's bathroom ... or at least, what I'm doing. Are you ready? Because it's downright shocking.

First, I quietly enter and find a clean stall.

Then, I take care of my excretory needs.

Then, I wash my hands.

Seriously, that's it. I'm there to do my business and get the heck out of there, just like every other woman on the planet. I'm not there to stare at you, or to harass you, or whatever other nonsense paranoid conservative men have dreamed up. I'm there to go pee.

Despite this simple reality, the Trump administration decided this week to rescind the Title IX guidance that required schools to allow trans students to use bathrooms congruent with their identified gender, in the name of "states' rights" and "privacy." I'm not sure what kind of women's restrooms President Trump has been in, but I can't say I've ever used a bathroom in any school where I could see anyone else while they went about their business.

Even with a friend escorting me, I have very clear memories of being in a near panic the first few times I dared use a public toilet, of holding it for so long that I nearly wet myself because I so afraid.

If I'm being honest, though, using any public restroom can be a pretty damn nerve-wracking experience for me. I spent most of my life being force-fed cultural messaging that my gender is somehow not genuine and that my womanhood is inherently suspect, and I've internalized that to the point where I don't feel terribly comfortable in many gendered spaces. Bathrooms make me rather nervous, and I won't even go near a woman's locker room.

For a long while, I wouldn't use a public bathroom alone at all. I came out as trans before the meteoric rise in visibility that the trans community has seen in the last few years, back when we were more urban legend and daytime talk-show fodder than political hot-button issue. No one was really "on the lookout" for trans ladies in the bathroom then (and no one had yet tried to put a bounty on us), but I was still absolutely convinced that the sight of me waiting in line to relieve my bladder at the club was somehow going to incite a riot; that I'd be driven out by a swarm of women whacking me with handbags unless I had a cisgender woman with me to "authenticate" my womanhood.

Even with a friend escorting me, I have very clear memories of being in a near panic the first few times I dared to use a public toilet, of holding it for so long that I nearly wet myself because I so afraid. I don't think I went to the bathroom alone for the first two years that I was out. It became a ritual among my friend group: "Whose turn is it to be Mari's bathroom bodyguard?" — and I'm one of the lucky ones. I had friends who were patient and understanding and had no issue with accompanying me, and thankfully, I've never encountered anything worse than a weird stare or some uncomfortable muttering.

Many trans women, though, are not so fortunate. Though there are zero reported cases of trans people attacking others in public restrooms, trans people themselves are the victims of sexual violence, police violence, and hate violence at alarmingly high rates. And sometimes those attacks happen to trans people when they are simply trying to use the bathroom. It seems that, when a trans person tries to use the bathroom, they are the ones at risk of assault or violence — not the people in the stall next to them.

Like many other trans women, I use a medication called spironolactone to block testosterone production. Spironolactone also just so happens to be a diuretic.

Even now, many years later, if I'm alone in a region where I know either the laws or local culture are not especially tolerant of trans folks, I'll go well out of my way to avoid using the bathroom. I'll search out places that I can be relatively sure have single stalls of some kind. Or, I'll just squeeze my legs together until I get to the next place that I feel at least marginally safe using a restroom.

I'll avoid drinking much fluid — even though I have a medical condition that requires I maintain excellent hydration. Adding insult to injury, like many other trans women, I use a medication called spironolactone to block testosterone production. Spironolactone also just so happens to be a diuretic. The end result is that I end up needing to use a restroom far more frequently than most people — sometimes more than 10 times a day.

Those are my experiences using the women's bathroom as a rather confident, very cis-normative (or "cis-passing") trans woman in her mid-30s who's been out for nearly seven years.

Trans women in the women's bathroom are like spiders. We are way more afraid of you than you are of us, and you are far more dangerous to us than we could ever be to you.

I try to imagine being an awkward teenage girl who has just recently come out as transgender at my middle or high school, and needing to use the bathroom during the day. I would have to constantly worry about how other students are going to react — would I get harassed, bullied, or maybe even assaulted just for setting foot in the girl's bathroom?

Next, I imagine knowing that my school isn't even required to allow me to use the right bathroom. Maybe I would have to hold my bladder all day because my school would require me to use the boy's bathroom, and I know exactly the kinds of dangers that being a girl in a boy's bathroom would bring. Maybe I would skip breakfast and lunch so I wouldn't have to use the bathroom at all, and spend my whole day hungry. Maybe I would have to trek halfway across the school to use a "special" bathroom designated only for me, further singling me out from every other girl and reinforcing that I will always be different and somehow less legitimately female.

No matter what, I know that the simple biological reality of needing to occasionally excrete waste would become an enormous distraction from my education, a huge additional emotional stressor. Maybe, when I saw that I'd be facing all of these risks for something as basic as going pee, I'd decide to simply stay in the closet — or even try to take my own life.

Transgender students are already at a frighteningly high risk of depression, anxiety, self-harm, and suicide. Our young trans people need unconditional support and affirmation of their identities. Their lives are stressful enough without turning their biological needs into farcical political debates. The reality is that trans students have been using the bathrooms of their identified gender for years without anything bad happening to cis people. This entire debate is nothing more than a constant attack on the legitimacy of trans people's identities, with the lives and wellbeing of trans youth being offered up as a sacrifice.

Trans women in the women's bathroom are like spiders. We are way more afraid of you than you are of us, and you are far more dangerous to us than we could ever be to you. And just like a spider, if you think you've never shared a bathroom with one of us, you're almost certainly wrong.