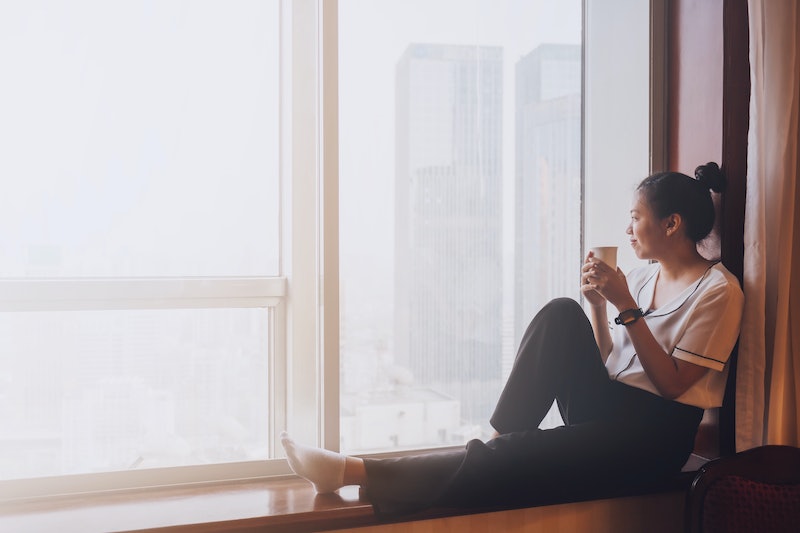 Sagittarius is almost in their shining birthday season, but what's currently standing in the way of their favorite astrological event of the year is Mercury's ruthless retrograde. What Sagittarius signs should and shouldn't do during Mercury retrograde in November 2019 will be the difference between showing up for Sag season bright-eyed and bushy-tailed and looking like an extra from one of the Hangover movies.

For Sagittarius, Mercury retrograde affects the sector of privacy, secrecy, and karma. This is an emotionally charged time for Sags, who will be dealing with a lot of old wounds and personal battles that they thought had already been put to bed. To zero in on how Sags should behave during this event, Bustle talked to astrologer Kyle Thomas, who explained that Sags have a lot of work ahead of them before they make it to their birthday season.

"This is an important time to release the past but also face the demons that haunt you," Thomas tells Bustle, reminding Sags that this is the last chance to let go of what's no longer serving them in order to arrive in Sagittarius season with a clean slate.

Do: Address Your Past

If trauma comes up for you during this time, Thomas says it's important to give it your attention. Don't let yourself get overwhelmed or shut down around heavy thoughts, instead take the time to address them one by one. The more you infuse your trauma with love and acceptance, the less weight you will bear.

You know the toxic patterns you fall into. And while you might be able to rationalize why it's OK during the rest of the year, Thomas says to expect your gut to tell you now is the time to shut it down. Whatever it is, cut it out. It's not serving you, and you know it. During Mercury's retrograde, you actually have the power to create healthier patterns, so put your energy toward something a bit more progressive.

Do: Allow Yourself To Heal

If you're hurt by something that you haven't given yourself a chance to heal from, it's going to become abundantly clear during this time. Allow yourself to feel hurt, and give yourself the love and time you need to move forward. There might be something you find you have to say to someone, so don't be surprised if intense feelings bubble up. The good news is that it's a very healing time for your sign.

According to Thomas, if you've kept a secret from someone, it's time to 'fess up. Now is not a time to play games or hide from the truth, it's a time to be open, honest, and clear. If you've been shady, it's going to show.

Thomas stresses the importance of taking the time to do nothing and just take care of yourself at home. Next month is going to be exciting, intense, and busy — so take advantage of this lull and enjoy some healing peaceful time with yourself.

Don't: Jump On The Offense

We're all feeling vulnerable during this time, and you might have the gut instinct to jump on the offense in a conversation that's far more heated than it should be. Instead, if you notice a conversation is getting charged, be the one to dial it down and lower the intensity. Nothing good will come from an angsty conversation.

The good news is that if Sags keep the above in mind, they'll be able to have a deeply positive transformative experience — and that's exactly what you'd want from Mercury retrograde.