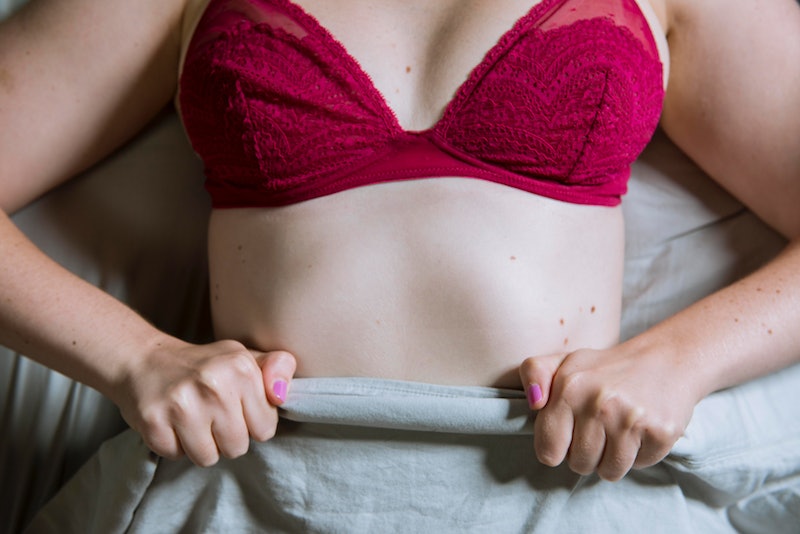 Women are told so many things about what sex first time feels like: that they're going to bleed like a stuck pig; that it’s going to hurt like hell; that it should only be with someone special. They're also told that losing their virginity is defined by the first time a penis enters their vagina. But that's just the case. Sure, for some women it hurts and some women bleed and some women think they haven’t had sex until they’ve been penetrated by a penis. But for all of the women who have those experiences, there are at least an equal number who don’t bleed, hurt, or ever have a penis go into their vagina — but are still definitely not “virgins.”

Dr. Britney Blair, PsyD, CBSM, AASECT, a clinical psychologist, sex therapist, and founder of the sexual wellness app Lover, says that the reason there are so many myths around what sex feels like for a woman is because there's a lot of misinformation floating around.

"It's presented as something that’s done to us, something we lose, rather than something women can be quite excited about," Dr. Blair tells Bustle. "And, with the right prep, it could actually set her for a really good time."

Of course, not everyone who has a vagina is a woman — and not all women have vaginas. But because the cultural understanding of "losing your virginity" is so rooted in the gender binary and the experience of heterosexual, penis-in-vagina sex (PIV), the term "woman" is appropriate here. Assigned-female-at-birth (AFAB) people who don't identify as women may have similar experiences and assigned-male-at-birth transgender women likely won't.

But every first time is different, of course, even for the two (or, in some special cases, more than two) people involved. Even the definition of first time can be different, with some folks counting oral sex or digital penetration as the time they lost their virginity. Here's what it was like for eight different women.

For some people, it takes a little bit of time to really be ready, even when they think they're already there. That could be for a variety of reasons: maybe they need to warm their bodies up a little more or relax so they're not too tense or maybe they just need an understanding boyfriend, like Marvy had.

"My first PIV experience was exactly what I wanted it to be," Marvy, 24, tells Bustle. "I was 19, my partner was 23, and he was the sweetest, most pleasure-focused boyfriend I'd had up until that point. We were long distance, so I came to visit him for a week. For a week, we kept trying, but I was too nervous to relax (and he was a bit sizable in the penis department). Finally, after basically a week of foreplay, we made it happen, and it was great."

One of the reasons for the painful-first-time narrative is because people of all genders aren't taught about the need for lots of warm up before PIV sex. (I say "warm-up" instead of "foreplay" because "foreplay" implies that everything before the penis goes in isn't sex.) Unfortunately, that was the case for Lily.

Dr. Blair says that not paying enough attention to the warm-up is the number one reason PIV intercourse hurts for many vagina-havers. "Take a very slow warm-up, use lots of lubrication, and go slow," Dr. Blair says.

It might come as no big surprise, but woman are actually more likely to orgasm when they have sex with other women. According to a 2018 study from the University of Arkansas that included 2,300 women of varying sexualities, women are actually 33% more likely to orgasm with another woman than with a man. Maybe that explains why Sarah, 38, tells Bustle her first time with another woman "felt like shooting stars soaring through my body and especially tingling my toes."

Dr. Blair doesn't even use the term "virgin" because, she says "it's so heteronormative."

"I think that it’s an antiquated term," Dr. Blair says. "All of the sex that we have that’s outside of PIV intercourse, I consider sex. PIV intercourse is just a small aspect of it.”

While most women need a good amount of making out, oral sex, and rubbing before their vulvas and vaginas are ready for penetration, unfortunately that's often not the case with first-time PIV. Or, as was the case for Michelle, their teenage boyfriends don't really understand what "warming up" entails.

"I was so nervous to lose my v-card — thinking it would be so painful and I'd bleed everywhere — but it only hurt a bit," Michelle, 27, tells Bustle. "I remember thinking 'This doesn't hurt too bad!' What I didn't know was that my boyfriend basically just put the tip in to 'warm me up.' I bled the first three times I 'had sex,' which were basically just penis warmups. My sweet boyfriend was patient and worried he'd hurt me that we took it really slow."

Unfortunately, the stereotype of the guy just going for and the girl wincing in pain does still apply to some people's first time. And, like Ziggy, some of those people have figured out very colorful metaphors to describe the feeling.

"Like trying to shove an 18-wheeler into a bike rack," Ziggy, 29, tells Bustle. "It wasn't well planned, and he wasn't much for foreplay."

Sometimes a person's first time is just... Weird. Like you're not sure what's going on? Or whether it feels good? Or whether you even like it?

And, sometimes, it's just kind of "meh." Kess, 32, says her first time having PIV was "not super painful but far from the mind-blowing experience I expected."

A lot first times are like the experience Kess had: Not great, but not terrible either. But one thing this list makes really clear is that women have a wide range of experiences their "first time," no matter how they define it.

More like this
These 4 Signs Are The Seductive Sirens Of The Zodiac
By Brittany Beringer
The 19 Best Tweets & Memes About Bisexual Awareness Week
By Lexi Inks
Are Quality Time & Gift-Receiving Love Languages Compatible?
By Lexi Inks
Why A Libra & Libra Couple Might Become Codependent
By Kristine Fellizar
Get Even More From Bustle — Sign Up For The Newsletter

This article was originally published on July 21, 2015