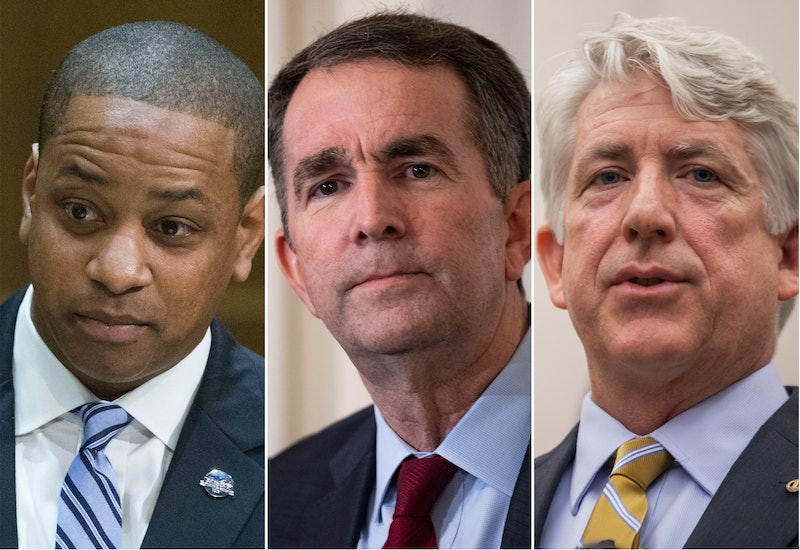 Just a week ago, Virginia politics seemed to be trucking along as usual. But now the top three members of the state's government are each embroiled in separate controversies rooted in their behavior in decades past. Even if you've been following the events of the last several days, you may be wondering just what the heck is happening in Virginia.

The trio of scandals began to unfold Friday, when a photo surfaced from Gov. Ralph Northam's medical school yearbook page showing someone wearing blackface next to a person dressed in a Klu Klux Klan costume. Northam apologized for appearing in the picture at first, but walked back that statement the very next day. Then on Monday, a sexual assault allegation surfaced against Lt. Gov. Justin Fairfax — Northam's second-in-command — which he unequivocally denied. If those headlines weren't enough to send you reeling, on Wednesday, the third person in the Virginia line of succession for governor acknowledged that he dressed in blackface once during college.

"This has been an awful week for Virginia," Democratic Sen. Mark Warner told reporters. "I'm shocked and incredibly disappointed."

If you're wondering exactly what's happening in Virginia, look no further. Here's where each of these three politicians stands at the moment.

Northam now says that the racist photo on his yearbook page doesn't actually show him. But he did acknowledge that he wore blackface on a separate occasion as part of a Michael Jackson costume at a dance competition. He also acknowledged that several people called him by a nickname that included a racial slur in college.

It's a very open question whether Northam is going to resign, though. By Wednesday, The Washington Post reported that "virtually all of Virginia’s political establishment," as well as many Democrats on the national stage, had called for him to step down. Prominent Democrats running for president in 2020 have condemned Northam, and even Hillary Clinton has jumped into the fray to call on him to leave office.

The Post reported on Wednesday that he's still holding meetings with government officials to discuss the possibility of keeping his job, however. On Tuesday, the paper reported that he was having a "hard" time accepting the idea of resigning, in part because the speed with which the Democratic Party rejected him came to him as a "shock."

Democrats in Virginia and around the country had been much slower to call on Fairfax to resign. According to The Washington Post, they tried to avoid rushing to conclusions about the sexual assault claim against him, while also trying to affirm the importance of "believing women," a mantra in the post-#MeToo era.

The woman who claims Fairfax assaulted her, Vanessa Tyson, alleges that Fairfax assaulted her in a hotel room after the Democratic National Convention in 2004. She reportedly went to The Washington Post with this allegation in November 2017, but the paper wrote that it didn't publish a story at that time because it couldn't corroborate her account. News of her allegation first surfaced Sunday night on a "right-wing website," according to The New York Times, and she issued a statement in her own name Wednesday that detailed the alleged assault.

Fairfax has so far insisted that the accusation is false and that he and Tyson had a "100 percent consensual" encounter, per The Times. Before Tyson went public Wednesday, he issued a statement claiming that "at no time did she express to me any discomfort or concern about our interactions, neither during that encounter, nor during the months following it, when she stayed in touch with me, nor the past fifteen years."

On Wednesday, state Attorney General Mark Herring put out a statement in which he admitted to wearing blackface during college. His statement was all the more striking since Herring had issued a call for Northam to resign over his yearbook photo on Saturday.

"In 1980, when I was a 19-year-old undergraduate in college, some friends suggested we attend a party dressed like rappers we listened to at the time," Herring wrote, explaining that they "put on wigs and brown makeup." He added that "this was a onetime occurrence" and that he accepted "full responsibility" for his conduct.

Herring said in his statement that he is open to resigning, but has not yet decided whether to do so. "In the days ahead, honest conversations and discussions will make it clear whether I can or should continue to serve as attorney general," he wrote.

The fourth in line of succession for the governorship appears to be Kirk Cox, a Republican who is the speaker of the Virginia House of Delegates. If Northam, Fairfax, and Herring — all Democrats — step down, their actions could bring about a dramatic shift in the state's government from Democratic to Republican control.

No matter what happens next, it's clear that Virginians and people around the country are disappointed and, frankly, frustrated by what's going on in the state. Northam's popularity sank 41 points over the weekend, according to a Morning Consult poll. Since then, the situation has only gotten messier. One state senator likely summarized many people's feelings in a text message to The Washington Post on Wednesday: "This is freakin screwed up!"