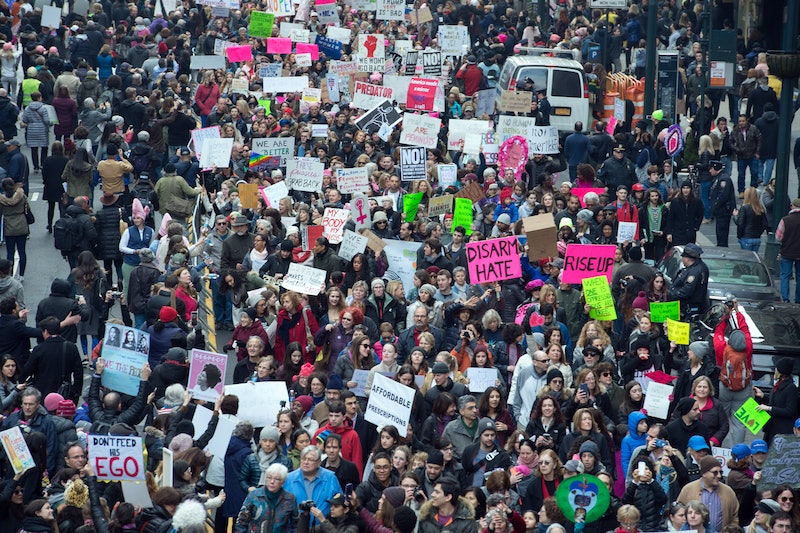 Long before the Women's March, progressive organizations were already thinking of ways to resist Donald Trump's presidency. Seven days into the New Year, the Resistance Manual wiki was born. There are many things the Resistance Manual creators want you to know about supporting intersectionality — one of their core missions. A public resource, the wiki is meant to help educate others about Trump's policy agenda and provide resources for making a real difference. "The goal of the wiki is to connect people to existing infrastructure that exists to make a difference," Aditi Juneja, 26, co-creator of the manual, tells Bustle. "Political action (e.g. calling reps) is certainly a huge part, but on the state and local pages, we're also connecting people to local organizations working in different areas."

It was Juneja who first thought of the basic idea and framework for making a manual. Right after the election ended in early November, Juneja began to track the potentially negative impact of Trump's policies on different communities — from people of color to Muslims to the LGBTQ community — and learn the best ways to prevent those policies from being implemented.

As a volunteer legal adviser for Campaign Zero, Juneja reached out to Sam Sinyangwe about the possibility of turning her growing collection of notes into a public manual that anyone could access, read, and edit as necessary. By mid-December, Sinyangwe and a team of technologists had converted the manual into a wiki page. Like any other wiki page, people can go to the Resistance Manual online and edit almost any paragraph in any of the sections, such that the manual is constantly being updated to reflect new lawmaking, executive orders, and other policy procedures.

Here's what the Resistance Manual homepage looks like when you first visit the site:

On Jan. 7, the Resistance Manual team started allowing other people to add content as wiki contributors. So far, more than 400 new pieces of content have been added to the Resistance Manual since the first day it was published, according to Juneja. "The goal is to empower people and give them space to share resources. We very much want people to participate and for it to be self directed," she says about the manual, which is a project collaboration between Stay Woke and Campaign Zero.

Juneja says she reached out to a variety of experts and advocates across several issues such as disability rights, in an effort to make sure that the manual was as intersectional as it could possibly by the time it was launched. "Intersectionality is important because we are all more than one thing," she explains. "For example, I am an immigrant, a woman, a person with a disability, a religious minority, a lawyer, and an American. Any resource that focused on one aspect of that identity at the expense of the others would not address the full intersection of who I am and how policies impact me."

Thus, the Resistance Manual is organized primarily by policy issue, because it's important to know that many policies affect people from several different communities, Juneja says. Disparities in policy impact are broken down on individual policy pages, although there are also laws and policies that specifically target certain people. For instance, religious freedom laws provide an excuse to discriminate against the LGBTQ community in particular.

For people who want to look for a certain policy, community, or other phrase, they can easily do so at the top right corner with the search bar that says, "Search Resistance Manual."

Ultimately, Juneja says she hopes the manual will be useful for all people who want to understand Trump's policies and how they will affect communities on a local, state, and national level, as well as across the spectrum of identities. The Resistance Manual goes one step further by sharing resources for individuals to take part in stopping Trump's agenda from moving forward, as well as mobilizing groups to make concrete progress from the grassroots level up — because that's where it all starts.