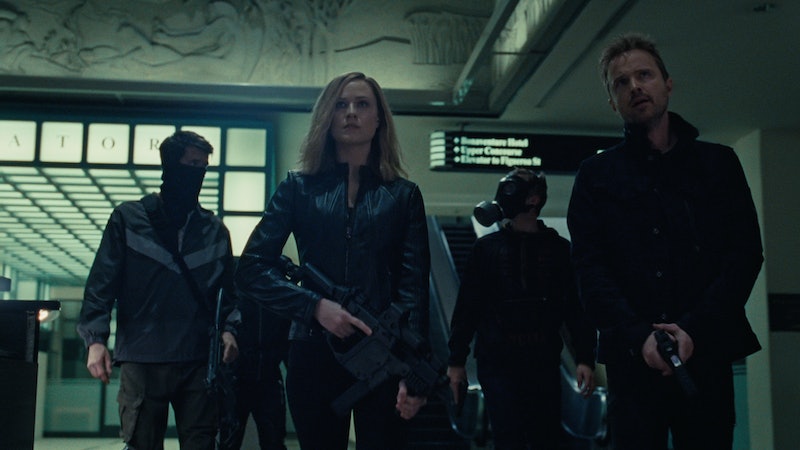 Who's the final Dolores copy?

We knew all season that Dolores had taken five pearls with her, but until the finale we had no idea which host she put her final Dolores clone into. Turns out that was Clifton Collins Jr.'s Lawrence, who made an all-too-brief appearance in front of Bernard and Stubbs.

That's not even the most shocking reveal, though. In a confrontation with Maeve, Dolores revealed all hosts are actually Dolores copies. The original versions all failed, so Arnold and Ford just copied Dolores as the base to build everyone else.

How does Dolores know Caleb?

Dolores finally revealed that her meeting with Caleb in the tunnel was indeed planned from the beginning. After soldiers were brought in to quell an uprising, they talked about sexually assaulting the female hosts. Caleb was the only one who stopped them.

The host Caleb theory also seems to be put to rest here. He wasn't chosen by Dolores because of his violent past or outlier status, but because she saw he was a good man with the ability to make the right choices.

What was Dolores' plan?

Dolores appeared to want to destroy humanity the whole season, but her goal was actually a lot simpler than that. She wanted to give both humans and hosts the free will to choose how to live.

We also learned that humanity is destined for extinction within a century, regardless of what she or Serac did. By forcing Caleb and Maeve to make a decision, she unintentionally sets them up as leaders for the apocalypse. Caleb briefly became the head of Incite, and he used that power to destroy Rehoboam. Maeve, meanwhile, was the last host to talk to Dolores, and will assumedly carry on her wishes now. Fittingly, Caleb and Maeve overlook the burning city together in the episode's final moments. But what will they do now? Will they continue to work together? Will Caleb's goals eventually clash with Maeve's, or will he be loyal to her in the same way he was to Dolores?

He was and he wasn't. Many popular theories suggested he was simply a hologram, but turns out he really was a living human. He was just the puppet of Rehoboam, acting as a flesh-and-blood embodiment of the computer. Ultimately, Maeve took Serac out, just as she said she would.

Dolores was uploaded to Rehoboam by Serac, and then Caleb destroyed Rehoboam. We're told Dolores died in the process, and the dreamy sequence between Maeve and Dolores suggests she's really gone now. Do we believe this is the last we'll see of Evan Rachel Wood though? Technically Dolores lives on if all the hosts are copies, but it's unclear if we'll ever see original Dolores again.

Is Halores the new villain?

In the last episode, Halores (aka Dolores in Charlotte's body) brought Maeve and Hanaryo back online, and this episode we learned who Halores is working for: herself. It seems that Charlotte's family dying in the car fire has become a cornerstone for Halores, and she's out for revenge.

“You’re one of my weaknesses too, Dolores," Halores said to Dolores before shutting her down. In the final moments, we learned that Halores is back at Delos and building an army of new hosts, with a host William at her side. Is her goal to replace all humans with hosts, or just rebuild the old hosts? It's worrying that she said Dolores was her weakness, after we found out how sentimental Dolores' real intentions were. Is Halores just basically Wyatt all over again?

What was the point of having William in Season 3?

I mean, did we honestly need to spend so much time with him? He had a fitting death at the end of Season 2 already! Halores could've revealed the William clone and it still would've hit just as hard if Will had died a season ago.

What's going on with Bernard?

Bernard's been terribly underutilized this season, but the finale gave him a potentially cosmic role going forward. First, we learned that Bernards’s wife Lauren is still alive. Then we found out that Bernard was the one holding the Forge key all along. Finally, in the end credits we saw him putting on a headset, accessing the Forge data, and then...zoning out for a century so that he's covered in dust? What's going on?

It's not entirely clear what Bernard has access to and what he plans to do, but whatever it is will have massive repercussions for the entire show going forward. If humanity is destined to die in 100 years (from climate change or nuclear fallout, it seems), is Bernard's job to try and stop it, or to repopulate the world with host copies of humans after they die? If Bernard is a godlike figure now, is it up to him to decide if humanity is even worth saving?

Whatever happens, it's clear Westworld has set up quite a few cliffhangers to keep us hooked until the next season.