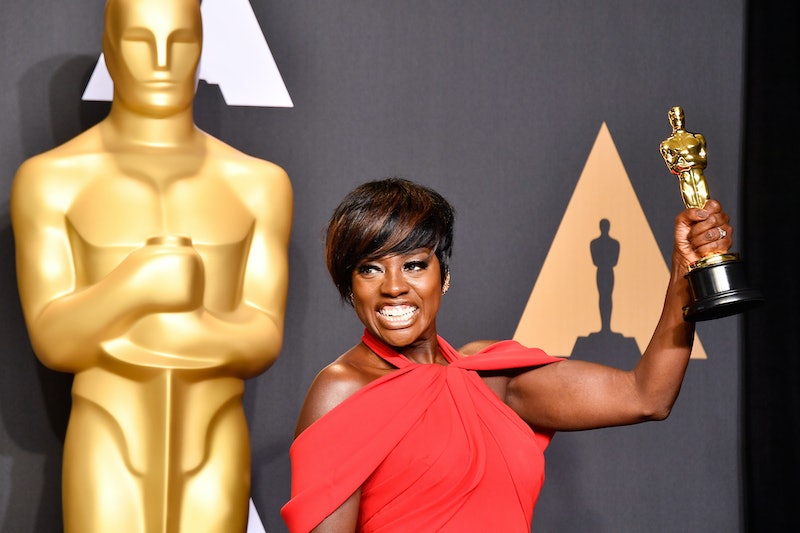 This past weekend was a major deal when it comes to Black Hollywood. Not only was history made at the 2017 Academy Awards on Sunday night when a record number of Black actors and producers won awards, but the movie Get Out, starring a Black actor and directed by a Black filmmaker, was a massive box office success. Yet while these are all steps in the right direction for Hollywood diversity, a weekend like this shouldn't be a rarity. It should be normal for the film industry to celebrate the tremendous contributions of Black actors and directors; we shouldn't have to breathe a collective sigh of relief when people of color are recognized for making good work.

Sadly, though, that's where we're at, currently. It's a huge deal that Jordan Peele's Get Out, a horror comedy about a young Black man (Daniel Kaluuya) who falls victim to his girlfriend’s (Allison Williams) White suburban family, made over $30 million in ticket sales and became the number one movie in America. Blumhouse Productions and Peele reportedly spent just $4.5 million to make Get Out, so its success is especially impressive. Even better? As Rotten Tomatoes reports, the film has received 99 percent positive reviews, making it a critical hit, not just a financial one.

While Get Out was making history at the box office, five African American actors and directors made history at the Oscars, taking home Academy Awards for their on-screen work. Viola Davis won an Oscar for Best Supporting Actress for her performance in Fences, becoming the first Black woman to win an Oscar, Tony and Emmy award for acting. Barry Jenkins and Tarell Alvin McCraney won for Best Adapted Screenplay and Best Picture for Moonlight, Mahershala Ali became the first Black Muslim actor to win an Oscar when he took home the award for Best Supporting Actor for his role in Moonlight, and director Ezra Edelman won for Best Documentary Feature for O.J.: Made in America.

It's great that Hollywood finally seems to be recognizing Black performers and artists for contributing high-quality work to the film world. However, this should be happening all the time, not just this past weekend. Artists like Peele, Davis, and Ali have always done brilliant work and have been deserving of recognition for years. Their talent is neither novel nor rarities, and shouldn't be treated as such.

And it's sad that even when we do honor Black-led works, like we did this weekend, it's often with an unfortunate twist. For the first time in Academy Award history, three Black films were nominated for Best Picture — Fences, Hidden Figures, and Moonlight — but while Moonlight ultimately got the win, the spotlight for them to shine in that moment was quickly dimmed by the accidental awarding of La La Land for Best Picture. The chance for the Moonlight cast and crew to reflect on their film, their accomplishments, and diversity in filmmaking was stolen from them.

It's a shame this happened, and hopefully, nothing like this will ever happen again. Moonlight fans can, at least, take comfort in knowing that the movie did win Hollywood's most prestigious award, and will now be hopefully seen by many more people. And there's also the success of Get Out to be excited about, especially since Peele uses his movie to highlight how we're not living in a post-racial society, even though some of us believe we are, and uses symbolic metaphors to show the plight of being Black in America. Get Out is one of the first major horror films since the '90s to have a Black protagonist, and it's one of the only ones in recent memory to discuss the psychological discord many Black people face due to micro-aggressions based off race.

The events of this past weekend are definitely worth celebrating. That said, they should be happening much, much more frequently.