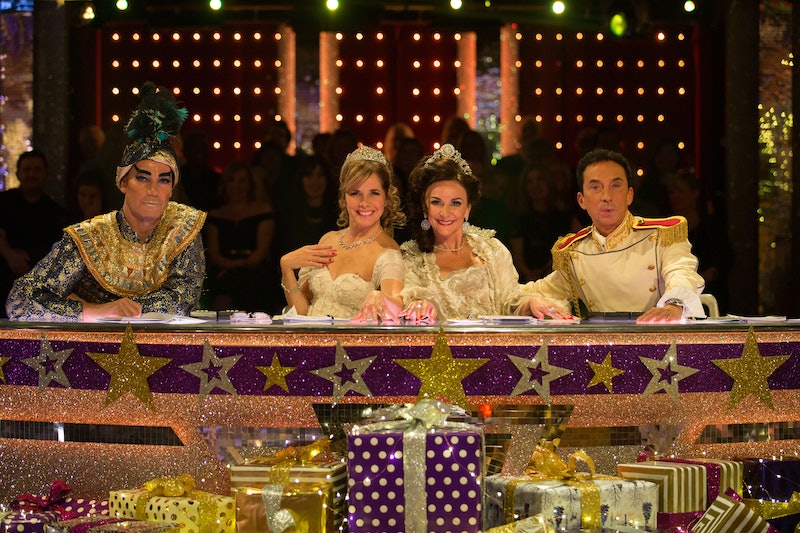 Christmas just wouldn't be the same without the glitz and glamour of the annual Strictly Come Dancing Christmas Special, and this year will be no different as the festive edition of the hit competition show will indeed be returning. Former Strictly stars will compete once again in the hopes of lifting the famous glitterball trophy. So what time is the Strictly Christmas Special on TV?

According to Radio Times, the special will see six previous Strictly competitors take to the glamorous ballroom once again, and will air on BBC One at 5.30 p.m. on Christmas Day. Making appearances throughout the episode are judges Craig Revel Horwood, Darcey Bussell, Bruno Tonioli, and Shirley Ballas, as well as the show's usual presenters, Tess Daly and Claudia Winkleman. So, which celebrities will be returning to display their very best moves? Well, the lineup was recently revealed — and it's an absolute cracker.

Returning to the show is Love Island's head girl Caroline Flack, who emerged victorious in the twelfth series of Strictly back in 2012. Also making their grand re-entrance to the ballroom is Strictly Come Dancing legend Ann Widdecombe. The former politician caused quite a during her original appearance on the show in 2010, mainly due to her unique dancing style — and fans will no doubt be delighted with the news that Widdecombe will be reunited with her original dancing partner, Anton du Beke.

As reported by the Radio Times, other celebrity dancers completing the lineup include television presenter Anita Rani, who originally competed on the 2015 edition of the competition show. JLS singer Aston Merrygold will make a return to the Christmas special after his shock elimination on last year's main series, and will be joined on the Strictly lineup by Eastenders actor Jake Wood, who back in 2014 managed to reach the semi-final. Finishing up the list of returning competitors is the former England cricket captain Michael Vaughan, who will be hoping to improve his seventh place ranking in the 2012 series.

The Christmas Day special comes after the epic conclusion of the 2018 series, which saw broadcaster Stacey Dooley crowned winner alongside dancing partner, Kevin Clifton. Dooley saw off some stiff competition from fellow 2018 finalists Ashley Roberts, Faye Tozer, and Joe Sugg, however her win wasn't too surprising, as the BBC Three presenter was the bookies favourite to emerge victorious.

According to Telly Mix, the 2018 series was a massive success with viewers, and the grand final enjoyed a peak audience of 12.6 million as fans tuned in to discover which celeb had bagged the trophy. As reported by Digital Spy, it was later revealed that shortly after her victory dance, Dooley actually misplaced her glitterball trophy — and reportedly left a message in her Strictly Whatsapp group which read "I left it in the room with all the bags and now I can't find it." Whoops.