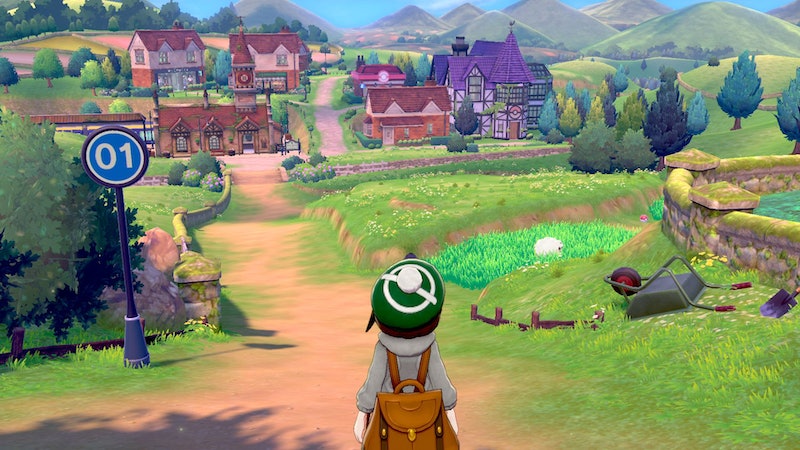 The Pokémon franchise may seem pretty overwhelming to some, especially when you consider that the franchise has been around for two decades with the next games in the series, Sword and Shield, coming out this fall. But thanks to a pretty solid formula that follows through the entire series, these games are pretty easy to pick up if you're entirely new to the Pokémon universe. So if these latest instalments are your introduction to the franchise, here's what to expect from Pokémon Sword and Shield.

Ever since Red and Blue first debuted in 1996, each game in the series has followed the same base formula. Your adventure begins in a small town where you're given your first Pokémon by the region's professor, who wants you to encounter and capture Pokémon to complete the regional Pokédex — a handheld, digital encyclopedia that records the data of each creature and retains their information for future research.

From there, your journey takes you across the region where your goal is to obtain eight badges from Gym Leaders in order to compete in the Pokémon League and become champion. Along the way, you'll also encounter other trainers to battle against, quests to complete, and an antagonising force to overthrow. The one you're probably most familiar with is Team Rocket thanks to the anime, but each generation has its own specific organised crime group who exploit Pokémon to achieve their goals.

You'll also encounter legendary Pokémon. Typically, you face the mascot of the game itself (in Sword and Shield's case, it's Zacian and Zamazenta), but there are also a handful of other legendary creatures that you can obtain either through the game's story or via online codes and live events.

While the core mechanics of the game are collecting, training, and battling Pokémon, the games also encourage players to connect and form lasting bonds with their Pokémon. Since Ruby and Sapphire's release in 2002, players have been able to transfer Pokémon through each game up until Ultra Sun and Ultra Moon enabling them to continue their Pokémon journey across generations with their favourite companions.

As has been with every game across the franchise, you can expect to see these elements in Sword and Shield. But as these titles will mark the eighth generation of the games, it's not surprising that there will be some deviations from the formula. While Sword and Shield aren't set to be released until later this year (November 15), Nintendo and its developers Game Freak have been more than forthcoming with info regarding the game through trailers, interviews, and gameplay demos.

At the moment, it seems that Sword and Shield will follow the main template that has been seen in every game up until this point, but will also introduce new mechanics such as Dynamaxing (a temporary battle transformation like Mega Evolution), co-op gameplay, and an open world area. The setting for the Galar region is inspired by England, with English-inspired Pokémon such as sheep (Wooloo), corgis (Yamper), and crows (Corviknight).

Although it seems these titles will be taking a significant deviation from one of the main aspects of the post-game — there will be no National Pokédex. This means that players won't be able to catch or transfer Pokémon that aren't in Galar's regional Pokédex to the game. Since this was first announced during Game Freak's gameplay demo at E3, fans have been extremely vocal about their disappointment regarding this decision. To the point where the game's producer Junichi Masuda issued a statement last Friday (June 8) stating that the exclusion of the National Dex was "a very difficult decision", but it still won't be included in the game.

Despite this, Sword and Shield became the "second most pre-ordered title" at GameStop in the U.S. during E3 in June, so it's safe to say that the excitement is still palpable despite the controversy.

More like this
This Wordle Rival Is Taking Social Media By Storm
By Sam Ramsden
'The Last Of Us' Has Officially Been Renewed For Season 2
By Darshita Goyal
Turns Out George Clooney Is A Huge Fan Of This Classic British Game Show
By El Hunt
'Bridgerton's Regé-Jean Page Is The World’s Most Handsome Man
By Darshita Goyal
Get The Very Best Of Bustle/UK
Sign up for Bustle UK's twice-weekly newsletter, featuring the latest must-watch TV, moving personal stories, and expert advice on the hottest viral buys.