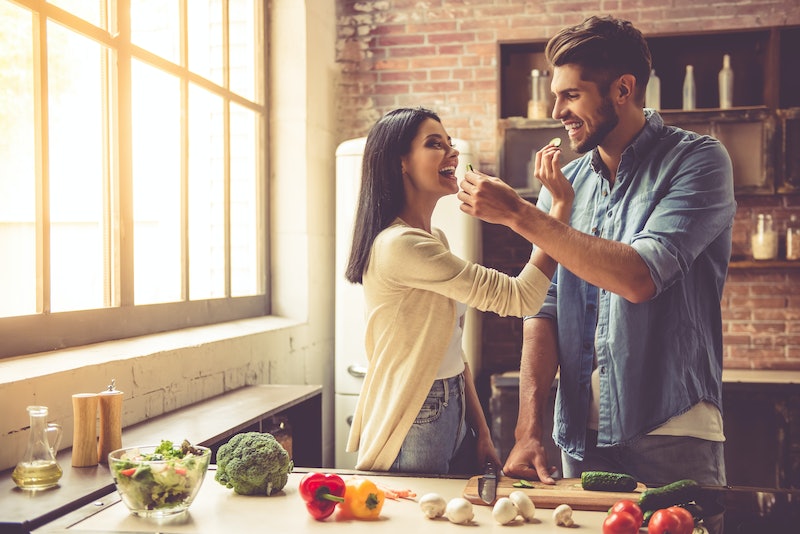 So, despite the fact that Mercury in retrograde has been complicating your day-to-day life for weeks already, something pretty awesome just happened: you met someone. But now you're freaking out because you don't know what it means if you met the person you're now dating during a Mercury in retrograde period, because that can't possibly be good, can it? To fall for someone while everything is in a state of constant complication and flux can't be a good sign for the health of the future of the relationship. For, if we're not supposed to book a flight during Mercury's retrograde without understanding that there's a good chance it will be delayed, cancelled or rerouted, that can't be a good sign for a relationship started in retrograde, right? Or, do the rules of retrograde not apply to love? According to astrologer Lisa Stardust, new love is safe from planetary motion. "Contrary to popular belief," Stardust tells Bustle, "a relationship isn’t doomed if you meet during Mercury retrograde." So don't cancel your next date or lower your expectations unnecessarily.

"All it means is that you and your partner may not understand what binds you both together as a couple — or maybe your friends won’t get the core foundation of the relationship," Stardust continues. But neither of these are reasons to avoid or fear feelings that develop during this time. "All [the retrograde] does is give us a chance to revive and understand matters from a different perspective — including love," Stardust goes on to say. In essence, meeting someone during July's retrograde period might actually be ~a good thing~ as you'll be getting to know each other from a different state of mind. Automatically, that gives you a more well-rounded look into your budding feelings, which can be a plus! "It doesn’t matter when you meet someone, it matters if there’s a connection," Stardust says.

That said, if you're revisiting an old love during July's Mercury retrograde (which, by the way, is a very natural and common thing to do), this can be temporary. According to Stardust, the apparent backward motion of Mercury inspires us to re-open relationships and revisit people are heart has held space for. While there might be a period of reconciliation or reconnection, Stardust warns that you should be weary of this being a lasting connection — for both of you. "It really depends if both people actually want to make the relationship work. Relationships may start out one way and then become more or less of an actual thing — which is all dependent on whether both people want to commit to resolving past issues." Having said that, if old issues are going to resurface, you'll notice pretty soon and that will be your cue to move on again.

Essentially, Mercury retrograde adds a new dimension to a new attraction and a new perspective to an old relationship. You should feel confident and comfortable exploring both options, as this can be a rich time to explore all matters of the heart.

More like this
The 3 Zodiac Signs Most Likely To Get Married Later In Life
By Kristine Fellizar
4 Zodiac Signs That Will Take Forever To Admit They Like You
By Kristine Fellizar
February's Full Snow Moon Will Breeze Right By These 3 Zodiac Signs
By Brittany Beringer
7 Dos & Don'ts For The February 2023 Full Snow Moon
By Brittany Beringer
Get Even More From Bustle — Sign Up For The Newsletter
From hair trends to relationship advice, our daily newsletter has everything you need to sound like a person who’s on TikTok, even if you aren’t.