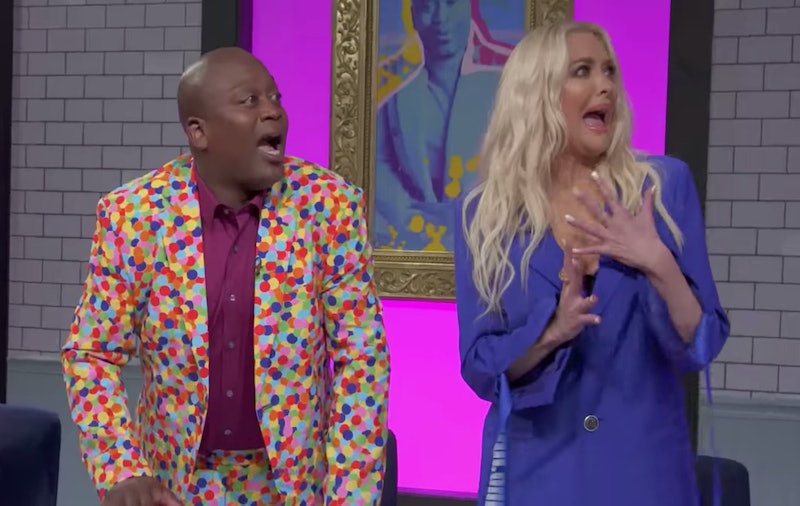 The middle of a global pandemic that's forced much of the world to stay indoors is not exactly the ideal moment for a short-form mobile video platform geared to on-the-go viewers to debut. Nonetheless, that's the moment Quibi is stuck with. The new service offers five to 10-minute episodes of shows headlined by big names like Sophie Turner, Chrissy Teigen, and Liam Hemsworth. But when we're all stuck inside with nothing but time to watch long hours of television, is there anything actually worth watching on Quibi? If there is, these are your best bets.

Chrissy's Court is exactly what it sounds like: Chrissy Teigen pretends to be a judge and presides over small claims cases, like romantic disputes and lost DJ equipment. Teigen's mom serves as a bailiff and her husband John Legend appears occasionally as an "expert witness." It's all very silly, but anybody amused by Teigen's Twitter presence will surely enjoy this.

The premise of Most Dangerous Game is likely familiar to those who read the Richard Connell short story it's based on in high school. In Quibi's adaptation, Liam Hemsworth plays Dodge Tynes, a terminally ill man who agrees to be hunted for sport in exchange for money for his family and treatments. It's a naturally intriguing premise that appeals to that old Hunger Games itch, and the show also features Christoph Waltz as the perfectly sinister overseer of the game.

A mash-up between HGTV and true crime, Murder House Flip is possibly the wildest show on Quibi. Each episodes starts off by describing the murders that happened in a particular house, then segues rather hilariously into a fabulous house makeover. Think of it like Fixer Upper, just with exclusively haunted homes.

Based on Alex Morel's novel of the same name, Survive stars Sophie Turner and Corey Hawkins as plane crash survivors lost in a frozen tundra. Together, they have to figure out how to survive the elements and work collaboratively, all while Turner's character struggles to hold on to her will to live.

Helmed by Unbreakable Kimmy Schmidt star Tituss Burgess, Dishmantled is a ridiculous show in which chefs are blasted in the face with a meal and then tasked with recreating it based on what they can taste on their clothes and off the floor. It feels like Cutthroat Kitchen taken to the extreme, and features guests like Dan Levy and Antoni Porowski looking suitably amused when the canon goes off.

Hosted by Keke Palmer and Joel Kim Booster, Singled Out is a reboot of the MTV reality TV dating series of the same name. The premise is simple: 30 contestants vie for one person's attention via a series of blind speed-dates. It's like if Love is Blind gave all the contestants only a few minutes to make a decision; it's certainly not the height of quality TV, but it is delightfully messy.

When the Streetlights Go On

Described by Mashable as "hauntingly shot and beautifully scripted," When the Streetlights Go On may end up being Quibi's major hit. Part Twin Peaks, part Stranger Things, the show follows the story of Charlie Chambers, a boy who stumbles upon the grisly murder of a teen girl. It Chapter Two's Chosen Jacobs stars as Charlie, and Queen Latifah plays the detective on the case.

Fans of RuPaul's Drag Race will likely enjoy NightGowns, a short docu-series centered on Season 9 winner Sasha Velour. It ventures away from the entertaining campiness of Drag Race, instead examining drag as an art form and taking a serious look at what it means for the people who live and breathe it.

The response may vary to this one, but Vox's Emily Todd VanDerWerff wrote that Nikki Fre$h is the one Quibi show she "wholeheartedly enjoyed." It's a strange mockumentary in which Nicole Ritche attempts to rebrand herself as "Nikki Fre$h" and become a rapper, but also a beekeeper. It's absurd and hard to explain, but perhaps this sort of off-the-wall show is exactly what people need right now.

Beyond these highlights, there's also 50 States of Fright, a horror anthology from Spider-Man director Sam Raimi; Chance the Rapper's Punk'd reboot; Lena Waithe's sneaker-centric You Ain't Got These; and Fierce Queens, a Reese Witherspoon-narrated docuseries about the powerful females of the animal kingdom. If there's one thing to say about Quibi, it's that it has no shortage of star power.

More like this
What’s New On Netflix: Ana De Armas’ 'Blonde' & A Nick Kroll Special
By Arya Roshanian
What’s New On Netflix: Meet 'The Real Bling Ring'
By Arya Roshanian
Where Is Armie Hammer’s Ex-Wife Elizabeth Chambers Now After 'House Of Hammer'?
By Grace Wehniainen and Radhika Menon
The Ultimate Guide To 'DWTS' Season 31’s Move To Streaming On Disney+
By Brad Witter
Get Even More From Bustle — Sign Up For The Newsletter