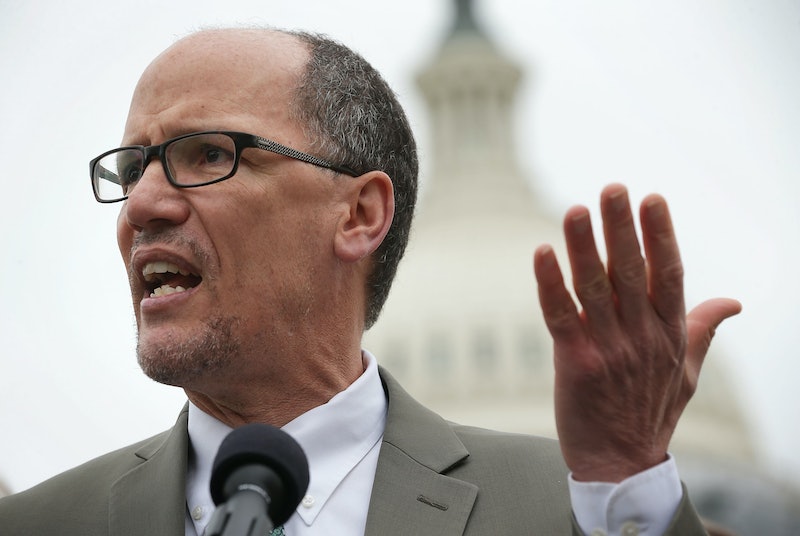 Well, it's all over. Former Obama administration labor secretary Tom Perez is the new chair of the Democratic National Committee, having defeated Minnesota representative Keith Ellison in a competitive race. And, in a surprise move moments after his victory was announced, Perez immediately named Ellison deputy chair, a decision clearly aimed at salving any wounds; Ellison was the choice of the party's left-wing base, and backed by the hugely popular Senator Bernie Sanders, a fact which Perez is clearly aware of. So, what does Perez's victory mean for the Democratic Party?

First things first, it's worth stating a fact that risks getting lost in the tumult of the race between Ellison and Perez. Namely, that the leadership of the committee has moved decidedly to the left over the course of the last year, and that would've been true whether Ellison or Perez nabbed the top job. Perez was widely regarded as one of the most progressive members of the Obama cabinet, having a background as a former federal civil rights prosecutor, and having been charged with contesting voter ID laws in Republican-controlled states like South Carolina and Texas while he was assistant attorney general for civil rights in 2011.

As labor secretary, he also publicly backed strikes by fast food workers pushing for rising wages, and supported the movement for a $15 federal minimum wage. Simply put, he's far from a standard-issue establishment centrist, even though the DNC race being perceived as a rehash of the 2016 primary may have led many in the party's Sanders wing to dismiss him as such.

Now, make no mistake, he's not quite as liberal or anti-establishment as Ellison, and that shouldn't be glossed over. But when compared to the controversial duo of Debbie Wasserman Schultz and Donna Brazile, who were the highest-ranking DNC officials at this point last year, this is a considerable shift to the left. But on the merits, if you're somebody who wants the Democratic Party to move left, and to embrace a more competitive ethos even in traditionally Republican states, this could end up being a very good day.

On the other hand, the disenchantment and upset felt by Ellison's backers can't be overlooked. There's no doubt that the more progressive wing of the party desired Ellison, and for reasons far beyond the relatively narrow scope of the responsibilities of the DNC chair. For his avowedly liberal policies, and his ability to communicate with and appeal to the working class, and his religious identity at a time when his fellow Muslims are increasingly under attack. And his political foresight, too ― he was, after all, one of the few elected Democrats who took Donald Trump's candidacy seriously all the way back in July of 2015, provoking a bout of laughter from Maggie Haberman of The New York Times on a This Week with George Stephanopoulos panel.

In short, for reasons of both who Ellison is and the moment in time at which his candidacy emerged, many progressives are going to feel burned by the fact that the party chose Perez over him. And as such, if Perez ever became embroiled in a favoritism controversy of the sort that ultimately brought down Wasserman Schultz, the party could be wrenched into an even more aggrieved state of disunity.

In that sense, despite the fact that Perez was seemingly viewed as the safer of the two picks by the Democratic establishment, his performance as DNC chair poses some big risks that Ellison's simply wouldn't have. He has far less margin for error with the party's base, and he'll likely be raked over the coals for transgressions both real and perceived in a way Ellison simply wouldn't have been. That fact in and of itself, one could argue, should have led the party to accept Ellison as its leader instead ― in this age of renewed activist vigor, harnessing and honoring that energy is about as important as anything.

This is all an elaborate way of saying that the new Perez/Ellison partnership could be a very positive one for the Democrats, if the party's base is willing to give it a chance. But that's a big if, and it's a two-way deal ― it assumes that Perez conducts himself in a modest and openly partnering way with Ellison at his side, and produces the kinds of results that Democrats and less-partisan progressives want to see. But on the merits, it's hard to argue that the DNC got stronger, more left-wing, and a more cohesive vision today than it had previously. Basically, this moment could be looked back on as a hugely positive one, if everyone plays their parts properly in the months and years to come.