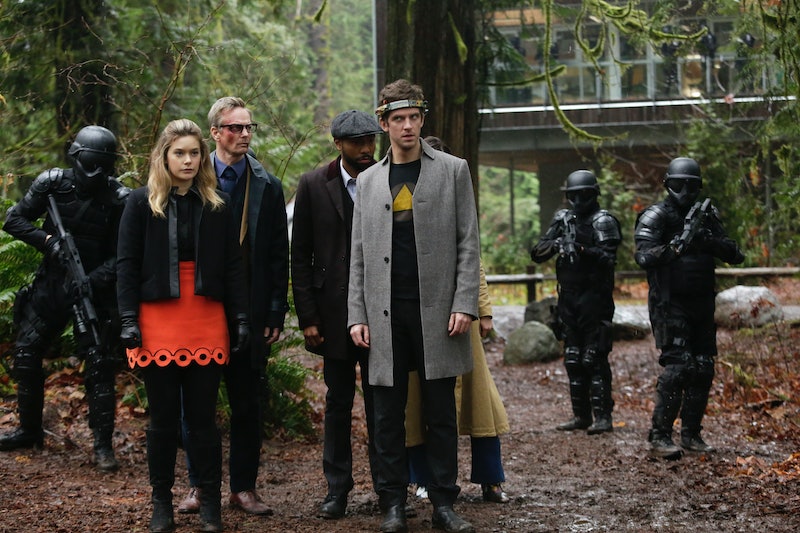 Summerland may be located in a forest, but David Haller isn't out of the woods yet. There is a mid-credits scene in the Legion finale with another cliffhanger. As if Lenny's road trip with Oliver wasn't stressful enough, David was kidnapped by a drone on Legion, and we won't know who took him or why until Season 2.

UPDATE: An FX press release has announced that Season 2 will premiere on April 3 at 10 p.m. ET.

EARLIER: It's honestly like he got sucked into a poké ball, right? In the scene, David and Sydney took a moment to relax on an upstairs porch, when a friendly-looking drone flew up and scanned him. The two of them were amused, wondered if Cary had made the little flying robot, and then it zapped David away. The drone flew off, with David clearly inside of it, screaming for help.

Who did this? Where is it going? How is David inside of that object? Maybe this is Division 3, back at it again with the abduction. If they had that kind of technology, you'd think they would have sent it straight away.

What if it's Professor X himself? The drone could be part of Cerebro, his mutant-detecting super computer. Hopefully it's not a kind of Sentinel, the mutant-hunting robots that pop up in X-Men films. On the other hand, could it be Magneto? That's someone who could easily control a flying metal object, and someone who would have an interest in Charles Xavier's morally grey offspring. Magneto actually used objects called Silver Spheres to capture mutants in the animated series X-Men: Evolution.

It would be pretty major to introduce Erik Lehnsherr on this series, and not just because my heart would hurt to see anyone other than Michael Fassbender in the role in this time period. Legion has successfully carved a place for itself on the fringe of the Marvel comics universe, but bringing in someone as major as Magneto would disrupt that.

It also calls into question when this series takes place with regards to technology. I know it's a superhero show with mutant parasites, but drones still are pretty advanced technology for the show's '70s mod aesthetic. Ultimately, I suppose it doesn't matter. The important thing is that something, or somebody, took David away. The Big Bad of Legion Season 2, I'm presuming, made one heck of an entrance.