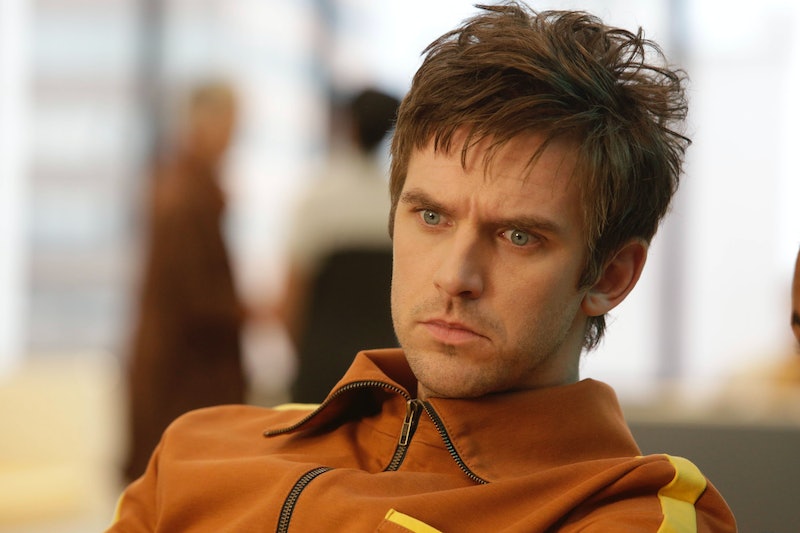 In its freshman season, the FX series Legion is making a case for its existence beyond its ties to the larger X-Men universe. Even if it didn't connect to more mainstream Marvel mythology, I'd still be watching for Dan Stevens' artistically manic lead performance, jaw-dropping production design, and a scary examination of the tenuousness of memory and identity. But with all that going for it, the show still had a big X-shaped bombshell to drop. And in the March 15 episode, Legion finally broached the subject of David Haller's biological father. According to Lenny, David's real dad gave him away to protect him. Though he isn't named in the episode, comic book readers know that David's father in the Marvel universe is Charles Xavier, or Professor X.

His paternity explains why David is such a powerful telepath. But why would Charles — someone who's made it his life's work to shelter and educate young mutants — give away his own son? According to Lenny, it was to protect baby David from her. Or him. Or whoever she really is. "He thought he could hide you from me, but he was wrong," Lenny taunts David in "Chapter 6." "What do you think he’ll say when he finds out?"

Lenny's remarks indicate that Charles is still around in whatever time period Legion takes place. But being who he is, shouldn't Charles already be aware of what's going on with David? Or did he find some way of cutting the telepathic tether to his son?

And in taking credit for the professor's fear, Lenny basically admits that she and the Yellow-Eyed Devil are the same being. It's an outcome that I've been expecting, though it's still not clear what the Yellow-Eyed Devil wants except to keep David incapable of controlling his powers and even of feeling sane for more than a short period of time. If his humanity doesn't get in the way, David Haller is nothing but a very powerful weapon. And when he feels overwhelmed by the power and voices coursing through his synapses, that's when he's at his most volatile.

So apparently Charles Xavier knew soon after David was born that something would be coming after him. Legion doesn't appear so far to be the type of show to neatly tie up all its loose ends, but I hope his reason for fearing for his son will be made clear. It appears that as noble as Charles' intentions may have been, he severely misjudged the threat against David. Professor X may have been unable to keep his son safe from whatever Lenny is because she's parasitically feeding off of his memories. "I'm you, I'm me," Lenny tells David in "Chapter 4." "I'm everything you wanna be." How can David escape something that's a part of him?

When Stevens recently appeared on The Late Late Show with Logan actor Patrick Stewart, Stewart said he was open to reprising the role of Charles Xavier on Legion. So it's possible that in a future season, David's harrowing origin story may be told to him directly by his real father. Not that Legion would ever be as straightforward as that.