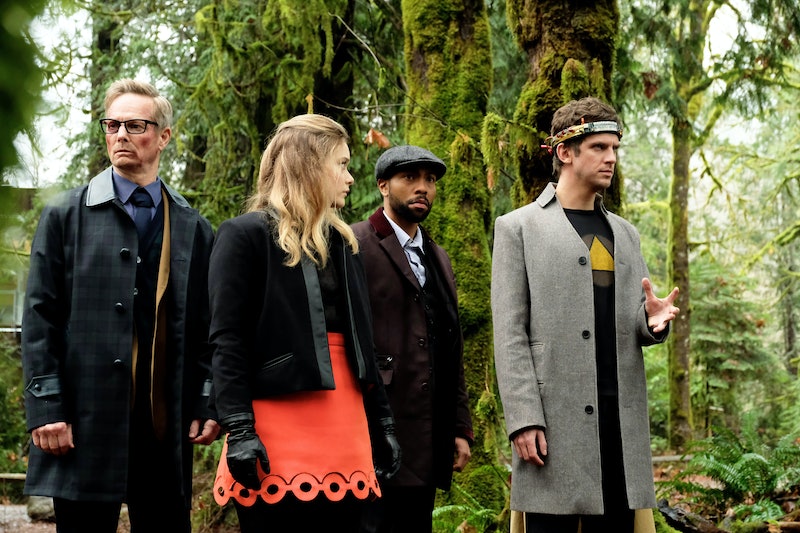 The entire first season of Legion has taken turn after turn, but always focused on one thing — David Haller's mind. In the X-Men comics that he comes from, David is known popularly as Legion, an all-powerful mutant, but despite being named Legion, the show seems to focus on a toned-down version of the comic book character. When Season 2 of Legion premieres, chances are that fans will get to see David start growing into the shoes that have been filled by the comic book version of Legion — but long-time comic book readers will possibly have a head-start at guessing how the plot develops in Season 2.

UPDATE: An FX press release has announced that Season 2 will premiere on April 3 at 10 p.m. ET.

EARLIER: While fans probably wish they had the mutant ability to speed up time and go right to the premiere date of Season 2, an official air date has not yet been announced for the FX superhero drama. But it has been renewed, so at this point it could drop at any time and in any format, which would fit the unpredictable nature of the show. The series has often zagged when it looked as though it would zig, but more often completely forgoes the option to either zig or zag to do something that no one else would've thought of. Legion turns into an explosive dance sequence or a silent black-and-white horror film without a moment's notice.

The most shocking thing about the reveal that David's childhood dog/The Devil With Yellow Eyes/The Angriest Boy In The World/Lenny actually being the Shadow King might just be that the Shadow King's history in the show is the same as the comic book history with minimal changes. If so, here are some other plot lines that could make their way to Season 2 of Legion.

One of the defining features of Legion in the comics is that he isn't just David Haller. In the comics, David Haller's mind has become the home to dozens of personalities, each with their own distinct powers. Legion's multiple personalities allow him to do just about anything and become just about anyone, making him one of the most dangerous mutants in the world. Season 1 has already toyed with the idea of multiple consciousnesses inhabiting one mind, through the Cary/Kerry dynamic and through multiple adventures deep occurring deep in David's mind. Season 2 of Legion could take this idea to new heights and see David starting to become more than just David.

Legion is, likely, the most powerful mutant in all of X-Men. If he's not the most powerful, he's certainly up there, which means he's a major threat to anyone on the opposing side of him. With great power, however, comes a great need for those who seek to keep the world at balance to control it, which is where Muir Island comes in.

Muir Island is a mutant-friendly destination, much like Summerland, but Muir Island's primary purpose in the comics is to research mutants. In the comics, Legion spent years laying catatonic at Muir Island as he recovered from a traumatic childhood incident. Later, Legion attacks his own father, Professor Xavier, while under the hold of the Shadow King. If David doesn't manage to get rid of The Shadow King in Season 1, this malevolent force could continue to wreck havoc.

One of Legion's most popular stories requires a bit more set-up than the show has done so far, but still hints at possibilities for the future of the show. The comic arc Legion Quest shows Legion going back in time in an attempt to foster a peace between mutant and humans, and he gets caught in the middle of the endless battle between Magneto and Professor X. While this event would be better suited for the X-Men films, it could indicate that Legion might dip its toes in time-travel sometime soon, and David's instability could do major damage to the past.

As a television series, Legion dares to ask the question, "How many surprise dance sequences do we need to do before you understand that you'll never be able to predict what will happen on this show?" Trying to guess where David Haller's mind will take him may be a fruitless effort, but considering that many eagle-eyed viewers managed to realize that The Shadow King was present long before the series revealed so, looking to the comics to try and predict the future of Legion may be the best thing a fan can do while waiting for Season 2.

More like this
'The Sandman’s Ending Is A Departure From Neil Gaiman’s Comic Book Series
By Kadin Burnett
Does 'Locke & Key’s Ending Mean There Could Be A Season 4?
By Sophia Moore
'The Simpsons' Will *Finally* Address How They “Predict The Future”
By Sam Ramsden
The 'PLL: Original Sin' Creators Say A’s Identity Will Be “Very Clear” By The Season Finale
By Alyssa Lapid
Get Even More From Bustle — Sign Up For The Newsletter