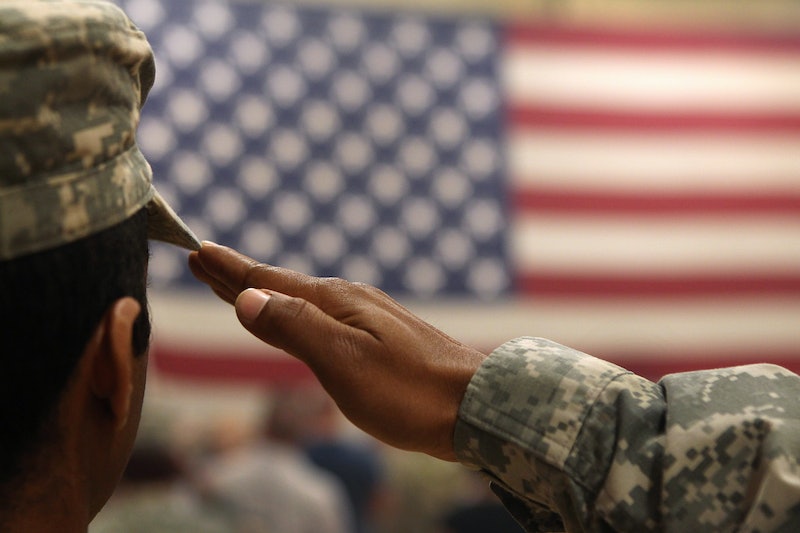 For transgender activist Alaina Kupec, her decision to leave the military more than two decades ago was a matter of integrity. Back then, LGBTQ individuals weren't permitted to openly serve their country. And Kupec, an intelligence officer for the Navy, knew that when the time came to conduct a polygraph test to maintain her security clearance, she couldn't possibly answer honestly about her own identity.

"It took me a long time to accept myself," says Kupac, a transgender woman from North Carolina who is co-chair of the Board of Directors for the Transgender Legal Defense & Education Fund. "I knew that I always had high integrity, and didn't want to jeopardize my integrity or put myself in a situation where I did have to lie or could potentially compromise my service to the country."

Years later, the possibility that LGBTQ folks could serve openly in the military seemed to be inching closer toward reality: During the Obama administration, the "Don't Ask, Don't Tell" ban on gay and lesbian service members in the military was repealed, while the Defense Department approved a policy to allow transgender individuals to openly serve.

On Wednesday morning, however, the possibility of transgender people serving suffered a major blow, after President Trump announced, via Twitter, that transgender individuals will be banned from serving, "in any capacity in the U.S. Military." The announcement comes after Trump's defense secretary, retired Gen. Jim Mattis, delayed implementation of the plan to accept transgender troops by six months.

There are more than 15,000 active serving transgender troops, according to the Human Rights Campaign.

Transgender activists across the country agree that the president's latest declaration is nothing short of ruinous for trans folks across the country. They also agree the latest announcement is a distraction from recent setbacks out of the White House, particularly Tuesday night's failed attempt by the Senate to repeal Obamacare.

"Between the Trump announcement this morning and the Senate vote in Texas yesterday on the 'bathroom bill,' it's really frustrating and angering that transgender people are being used as pawns at some kind of political game," says Ames Simmons, a queer, transgender man and Director of Transgender Policy for the organization Equality NC. "There have been significant presidential announcements every time Congress has had an important vote to repeal the Affordable Care Act, and it's hard not to view that as a deliberate strategy to keep people's attention elsewhere."

Danielle Pellett, a transgender woman running for political office in Texas, agrees. She says the president is using the announcement to avoid the real issues affecting the country. "I think it's problematic because with Donald Trump doing all these distractions, we can't actually have good policy going through Congress," she tells Bustle. "This is him trying to cover up his healthcare issues, this is him trying to avoid everything else."

Like Kupec, Pellett also wanted to serve her country, but knew she couldn't without living a lie. She says that since she was a kid, she had always dreamed of joining the military. But, and in the era of "Don't Ask, Don't Tell," those dreams were cut short. She says she was two months away from a 10-year commitment with the Air Force.

"They really feel like they had an ally in the White House and now they have an enemy and an administration of enemies."

Even after the policy against gay and lesbian service members was disbanded, being transgender was still considered a mental disorder and was grounds for not being permitted to serve. That didn't change until 2015, when then- Defense Secretary Ash Carter announced that the "regulations regarding transgender service members are outdated," and said that there are transgender soldiers, sailors, airmen, and Marines who were being hurt by the rule.

"That was what the U.S. military was using to cite that, OK, we can let gay people serve, but trans people are still technically mentally unsound, according to this vague description, and I was so glad when I saw that they were trying to allow trans people to serve in the military finally at the end of Obama's presidency," Pellett explains, pausing to add, "And I see this as a major setback."

While Trump claimed during his campaign that he would work to protect LGBT Americans, to those people, his actions appear to reflect just the opposite. Glennda Testone, the Executive Director of the Lesbian, Gay, Bisexual & Transgender Community Center in New York City, tells Bustle that since Trump took office, trans folks at the Center, usually around a few hundred people per month, have been more fearful.

"They really feel like they had an ally in the White House and now they have an enemy and an administration of enemies," Testone says. "Trans people are dealing with poverty and unemployment at higher rates than the straight population or even the lesbian, gay, and bi population, so to have an employment avenue closed to them is devastating."

Going forward, Kupec says she wishes trans people could be viewed as individuals, rather than caricatures painted by politicians for their own political gain.

"The stereotypes that politicians continue to portray is one that transgender people are equated with sexual predators in some way, and it comes down to genitalia," she tells Bustle. "What we'd seen in the eight years prior was a willingness for people to learn and understand, and they didn't have to agree, but maybe they would learn and understand. Now, we have emboldened ignorance, and I think the challenge is how to open people's minds again."