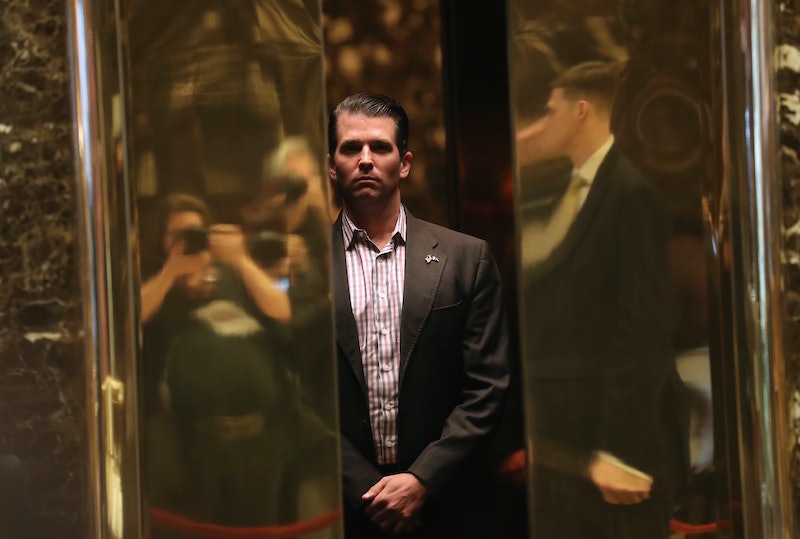 With Donald Trump Jr.'s emails out in the open, legal experts are pointing to evidence of possible collusion or conspiracy within the Trump campaign's highest ranks. The president's oldest son tweeted out pictures of his emails arranging a meeting with a lawyer with ties to the Russian government, and they contradict statements he made just days earlier, potentially exposing himself — and other top Trump officials, like Jared Kushner — to criminal investigation.

"It doesn't take legal expertise to understand that we're not talking about the sharpest crayon in the box here," Stanford Law professor Robert Weisberg tells Bustle. "He may have come forth with the emails with the simple reason that they were going to be demanded by the government. He didn't have anything to lose, and may have something to gain by the appearance he wasn't worried about them."

Tuesday's document dump came after a slow drip of statements by Trump Jr. over the weekend, first from the New York Times on Saturday, which said that he and Russian lawyer Natalia Veselnitskaya "primarily discussed a program about the adoption of Russian children," not opposition research on Democratic presidential frontrunner Hillary Clinton.

Yet Trump changed his position on Sunday, again amid pressure from the Times, acknowledging the lawyer offered him sensitive information on Clinton. "The woman stated that she had information that individuals connected to Russia were funding the Democratic National Committee and supporting Ms. Clinton," Trump Jr. said in a statement. "Her statements were vague, ambiguous and made no sense... It quickly became clear that she had no meaningful information."

Trump Jr.'s emails offer a much deeper look into an effort to coordinate with Russia to bolster the Trump campaign. In an email, an associate of Trump Jr. says the documents “would incriminate Hillary and her dealings with Russia and would be very useful to your father,” and “This is obviously very high level and sensitive information but is part of Russia and its government’s support for Mr. Trump.”

Weisberg says Trump Jr.'s decision to release the emails isn't surprising, considering he would have had to turn them over if Congress, Special Prosecutor Robert Mueller, or another legal official requested them.

"I'm willing to believe that he didn't have clear-headed nefarious intent, that he is very naive and not particularly bright." Weisberg says Trump Jr. may have thought "that he could have an interesting conversation with these people without committing himself to anything."

Kushner's in the biggest trouble because he failed to disclose this meeting immediately.

Weisberg pointed out a paradox that may work in Trump Jr's favor: Since the emails do not state that the lawyer with whom he met works with the Russian government explicitly, Trump. Jr. can claim deniability "even though there's no way her information could have been useful unless it came from the government."

"My guess is he just acted on a kind of juvenile impulse because he wanted to be a player," Weisberg says. "Whether that makes him a criminal is unclear at this point."

Trump Jr. said in a statement over the weekend that he asked his brother-in-law Jared Kushner and then-campaign-manager Paul Manafort to attend the meeting, "but told them nothing of the substance." The documents suggest that Trump Jr. forwarded the email chain to both Manafort and Kushner, opening them up to the same legal issues Trump Jr. could now face.

"Kushner and Manafort are big losers in this story," Jed Shugerman, a law professor at Fordham University, tells Bustle. "They got the email that said, this is the Russian government lawyer and we're going to get this info. That then makes them liable for all of the potential criminal allegations against Don Jr."

Kushner is the only one of the three who currently serves in the U.S. government. He is a senior advisor to the President and known to be among Trump's innermost circle. Shugerman says that exposes him to the most danger. "Kushner's in the biggest trouble because he failed to disclose this meeting immediately, and because he didn't disclose it immediately, it can be criminal."

While Trump Jr.'s statements appear intended to shield him from the email thread's suggestion of collusion between the Russian government and anti-Clinton opposition research, they clearly contradict the text — and Weisberg says the statements may open Trump Jr. up to still more trouble.

"Every statement he makes increases the chance that some statement will be inconsistent with another statement, which means one of them will be seen as a lie," Weisberg says, "even if the government can't nail him on some kind of substantive charge like soliciting donations from a foreign government, they might be able to get him on a false statements charge."

Donald Trump's young presidency has been dogged by allegations of ties to Russia during the campaign, which Trump has described as a "cloud" over his administration. After the weekend's attempts to take cover, the storm has centered on Trump's oldest son, with his son-in-law on the horizon.