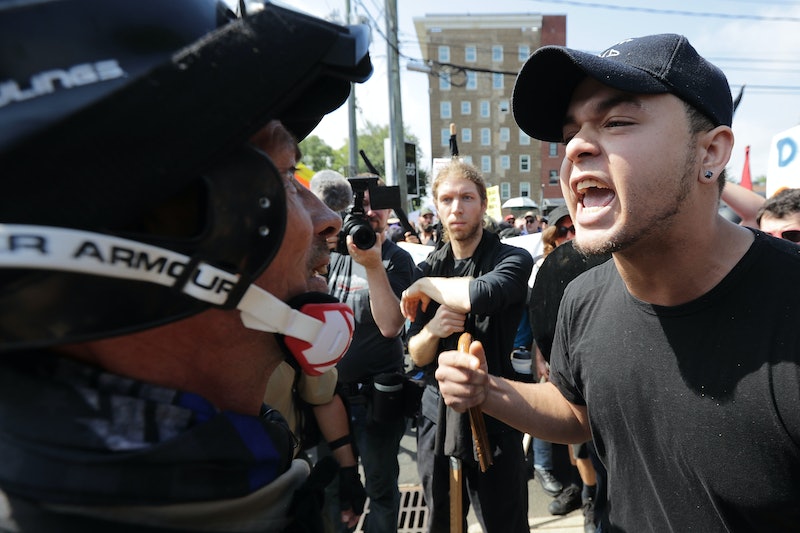 According to local news station WCAV, around 40 to 50 people gathered in Charlottesville's Emancipation Park for the rally. The marchers reportedly chanted, "You will not replace us," and, "We will be back." The rally only lasted about five to 10 minutes before the group reportedly boarded a tour bus followed closely by law enforcement offers, who made sure the protestors left town.

This weekend's rally occured almost two months after a similar, larger rally in August shook the community and the country. In August, an estimated crowd of thousands of white nationalist activists gathered in Charlottesville to protest the city's decision to remove a statute of Confederate Gen. Robert E. Lee. Protestors then chanted things like, "We will not be replaced by Jews," and carried lit tiki torches through downtown. Saturday's rally may have had a similar impetus.

The rally took place just a few days after a judge ruled that the lawsuit involving the Confederate statue's removal could move forward. According to WDBJ in Roanoke, Virginia, Judge Richard Moore denied a request from Charlottesville officials to dismiss the lawsuit, which seeks to prevent the city from removing the statue.

Moore's decision reportedly came down on Wednesday. On Saturday, supporters of the statue were back at its location for the rally, perhaps celebrating their small victory in convincing a judge that the lawsuit to block the statue's removal should move forward. In deciding not to dismiss the case, Moore ruled in favor of the statue's supporters, who argue that a Virginia law protecting war memorials can apply to the case.

However, the case is far from over. According to The Richmond Times-Dispatch, the statue's supporters had requested a preliminary injunction to require city officials to remove black tarps that have been hung over the statue. Moore reportedly denied that request.

Spencer, the protest's reported leader, also tweeted about the rally overnight. Directing his tweet to Signer, Spencer said, "It was great to be back in [Charlottesville]." He also retweeted several news reports and videos about the rally.

City law enforcement officials, who followed the protestors out of town, were reportedly looking into what, if any, legal action could be taken after Saturday's rally. In addition to the August rally, Saturday's gathering also followed a May protest at the Lee statue. Spencer reportedly organized that event, as well. While Confederate statues in other American cities have come down in large numbers since the August rally in Charlottesville, the statue that, very literally, stands at the center of the ongoing tension in Charlottesville will remain standing after Saturday's rally. It's not clear when a final judgment will be reached in the ongoing lawsuit over the Lee statue, but city officials and Americans from across the country will no doubt be watching closely.