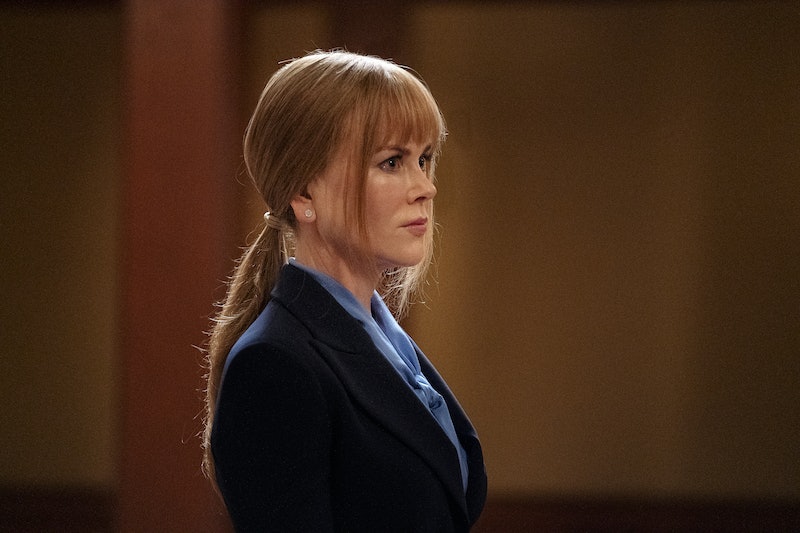 Spoilers ahead for the Season 2 finale of Big Little Lies. After a season full of deception, secrets, custody battles and, of course, lies, the Big Little Lies Season 2 finale tied up most of the show's loose ends. We finally know what happens to the Monterey Five: Celeste retains custody of her children, Madeline and Ed renew their vows, and Bonnie seems to finally find closure, both with her mom and in regard to Perry's death.

There is, however, one last huge bombshell at the end of the episode — all five women meet up and walk into the Monterey Police Department together. The credits roll before we're able to see what actually happens once they're inside, but it seems apparent that Bonnie is going to confess that she killed Perry — which raises a few questions about what could happen next.

According to Time magazine, who spoke to legal experts about Perry's case, Bonnie will likely be charged with involuntary manslaughter for pushing Perry, but could be found not guilty because she was defending Celeste. The rest of the Monterey Five are in a stickier position — after covering for Bonnie, they "might be liable for aiding and abetting the involuntary manslaughter as accomplices," lawyer Melissa Dagodag told Time, and could also be charged with obstruction of justice after lying to authorities.

Those possibilities aren't great for any of the women/ Jane and Madeline's respective relationships are finally in a good place, and this could ruin things; Renata's dealing with a ridiculous husband and a bankruptcy situation and doesn't need more on her plate; and it'd be heartbreaking to see Bonnie, who has been so guilt-ridden and tortured by what happened, be sent to jail right after breaking free from her own mental prison.

But things seem even more complicated for Celeste, as she's still reeling from another dramatic courtroom proceeding. Though she was able to maintain custody of her children, Mary Louise has always been suspicious that Celeste knew more about Perry's death than she was letting on. If those suspicions are confirmed, could she try to use it against her in another attempt to get the kids?

These are all questions a potential Season 3 of Big Little Lies could answer, and fans are already excited about that possibility:

But ultimately, the truth is that we might never know what happens. HBO president Casey Bloys told TVLine that it wasn't "realistic" for the series to continue, which makes sense, given the fact that literally all Big Little Lies' main cast members are huge film stars with busy schedules of their own.

And honestly, maybe this is the perfect place for the show to end. There are still plotlines that could theoretically continue, but there's no need for the story to keep going just for the sake of it, particularly since it was originally intended to only be one season. We have closure; now, maybe we should take a cue from Bonnie and try to move on.