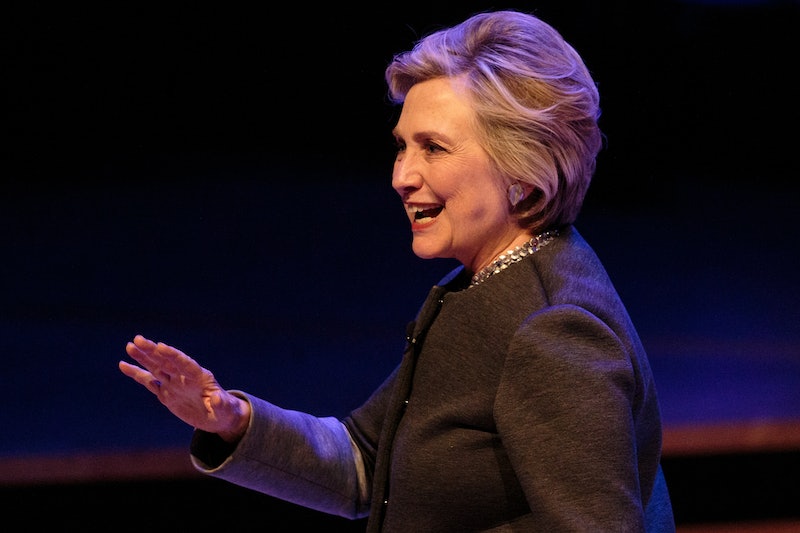 A certain former presidential candidate has a message for her supporters: She's not done yet. According to a report by The Washington Post, Hillary Clinton plans to campaign for Democrats in 2018, quietly supporting certain left-leaning contenders in the midterm races.

According to more than a dozen mostly unnamed confidantes and advisors interviewed by The Post, Clinton plans to selectively back certain Democratic candidates, focusing on districts that she won back in 2016. In doing so, aides said, she will hopefully capitalize on support she already has while simultaneously avoiding the ire of GOP smear campaigns.

Almost daily, Clinton's name or reputation is referenced on conservative media outlets. Similarly, Republicans campaigning for various elected offices continually utilize the former First Lady's name to rile up their voters. Chief among among those Republicans unable to relinquish the vitriol that the former Senator from New York's name can evoke is President Donald Trump.

On Saturday, Feb. 10, for example, Trump tweeted a quote from Judicial Watch president Tom Fitton, in which the conservative activist described the President as vindicated and victimized by "the lies about the Clinton/DNC Dossier." Fitton was a guest on the Fox News morning news show, Fox & Friends.

When Republicans appear eager to jump on any opportunity to use Clinton for political leverage and talking points, some Democrats are reportedly questioning the wisdom of former presidential nominee jumping back into the political arena, according to The Post. Of course, this is exacerbated by the fact that Clinton lost her 2016 presidential bid.

With these factors in mind, Clinton's aides said that she intends to carefully choose her battles. Reportedly, this means taking care to decide when a public endorsement would be more beneficial than a private endorsement.

"The resistance is looking for the next savior of the Democratic Party and I don’t know how much demand [for Clinton appearances] there will be outside of the districts where she beat Trump,” Patti Solis Doyle, who managed Clinton’s 2008 presidential campaign, told The Post.

Compounded in all of this is the fact that Clinton's favorability ranking recently hit an all-time low. A December Gallup poll indicates that her overall favorability among Americans is sitting at a paltry 36 percent. Similarly, her unfavorable rating reached a new high — leveling in at about 61 percent, according to the same poll.

That her favorability ratings have not increased since her election loss actually makes her an exception to a 25-year-long trend. Gallup reported in June of 2017 that most presidential would-be's regain public approval after suffering a loss on the national arena.

The question, "What happened?," which incidentally is the title of Clinton's 2016 election post-mortem memoir, has largely stumped experts. Everyone from pundits to political scientists to Clinton, herself, offer a different answer. On both sides of the aisle, analysts have repeated the refrain that Clinton was difficult to relate to. But for every person who focuses on her likability, there is often another pointing to her lack of campaigning in Wisconsin.

Clinton, for her part, has pointed to former FBI Director James Comey, who released a letter related to her ongoing e-mail controversy just two days before the election, thus re-hashing, at the very last moment, what had been a public relations nightmare vexing the campaign for months. She has also publicly blamed Russian interference in the election, which is still being investigated.

All of this is to say that, while she fronted a historic campaign, she is a divisive political figure among both Republicans and Democrats. With her polling history — both in favorability and in elections — it's nearly impossible to predict the effect that her stumping might have on Democratic candidates in the midterms. But, if there is one thing for certain about Clinton, it's that she is persistent, and if she plans to campaign, the public has not seen the last of her yet.