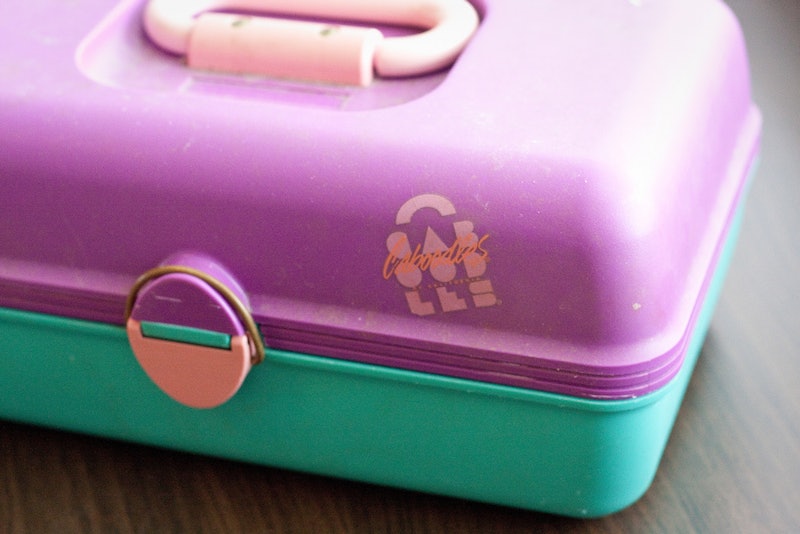 Children and teens of the '90s, put your thinking caps on: In a recent hashtag roundup, Twitter users answered the eternal question, “What would go in your ‘90s time capsule?” Using the hashtag #90sTimeCapsuleItems, ‘90s-loving folks named their picks for ’90s essentials. It turns out that a time capsule made to represent the last decade of the 20th century would be chock-full of Tamagotchi, Caboodles, and various types of media that no one can play anymore. I'm sure that humans of the future will find it, er... enlightening.

Funnily enough, Nickelodeon did create a ‘90s time capsule in 1992. According to Mental Floss, that time capsule — which lives at Nickelodeon Suites Resort in Orlando and will be opened in 2042 — contains immortal ‘90s memorabilia like a jar of Gak, Rollerblades, the films Home Alone and Back to the Future, and the albums Please Hammer, Don't Hurt ‘Em by MC Hammer and Dangerous by Michael Jackson. (They also included news reports about events like the end of the Soviet Union, the AIDs crisis, and Desert Storm, so that the robot-human hybrids of 2042 would know that the ‘90s weren't ALL Gak and Macaulay Culkin.) The ceremony to bury the time capsule was co-officiated by Joey Lawrence because OF COURSE IT WAS. (You can actually watch the insanity YouTube.)

The 1992 Nickelodeon time capsule was created with most of the ‘90s still left to happen, so a lot of vital ‘90s stuff was left out. (A capsule produced at the end of the decade would have included a lot more boyband stuff, the Spice Girls’ first album, body glitter, copies of Clueless and Buffy the Vampire Slayer, and the entire body spray line from Bath and Body Works.) Thankfully, Twitter users chimed in with their own suggestions; this is what their ‘90s time capsule would contain:

Truly, the greatest toy ever created.

Can we use a giant Caboodle as the time capsule?

Is it weird that I kinda miss video stores?

We should probably also include a CD player and VCR, yes?

In the distant future, will “Pokemon Go” supplant memories of the original Pokemon?

Shockingly, a 2-dimensional pet housed in a tiny plastic egg was never quite as good as the real thing.

What does the insane popularity of this talking fish say about humanity circa 1999?

The day that slap bracelets were banned at my school was the worst day of my life.

Saved by the Bell would also have to be included.

You know the one.

Seriously, those things were everywhere.