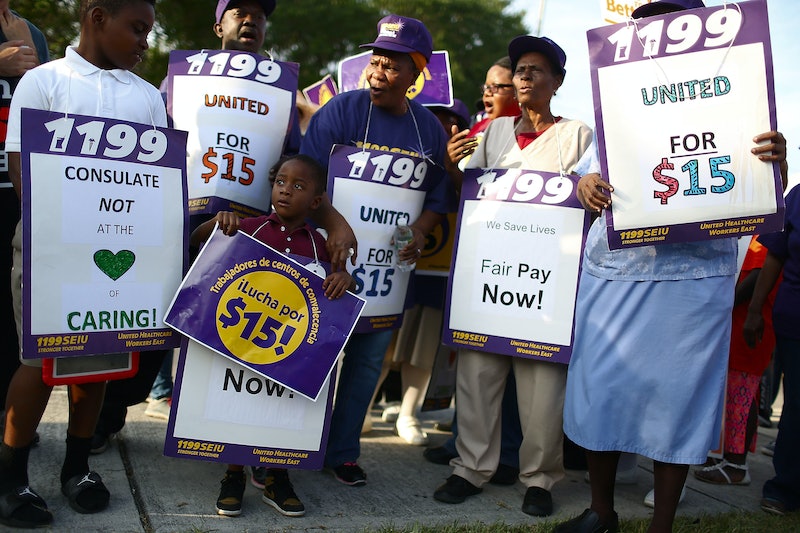 Millions of Americans could get a raise in the next few years, as the House of Representatives passed a measure Thursday afternoon to raise the federal minimum wage to $15 by 2025. The bill, called the Raise the Wage Act, is unlikely to make it through the Republican-dominated Senate or past the president's desk, but it could make a reappearance after the 2020 election. While exactly what would happen with a $15 minimum wage is unclear at this point, an economist tells Bustle the outcome would be overwhelmingly positive, and advocates say it would bring dignity back to "low-wage" work.

Momentum to raise the minimum wage has grown significantly over the last decade. Advocacy organization Fight for $15 continues to organize hundreds of strikes across the country, where low-wage workers walk out and demand higher wages and union rights. Meanwhile, opponents of raising the minimum wage have argued that it hurts skilled workers, that teens and part-time workers make up the bulk of minimum-wage workers, and that raising the wage contributes to inflation.

But the available evidence paints a different picture. Heidi Shierholz, senior economist and director of policy at the Economic Policy Institute, tells Bustle that research the institute has conducted found more than 33 million people would receive a raise under the Raise the Wage Act or a similar bill. Sheirholz says 90% of those workers are over the age of 20, meaning the overwhelming majority of those who would receive a wage are adults "who typically depend on the earnings from their low-wage job to make it month-to-month."

"People know that people who work hard for a living deserve a living wage and things far more decent than they are getting right now."

A nonpartisan Congressional Budget Office (CBO) report released earlier this month differed a little from the EPI's report. It found that a $15 federal minimum wage would raise the wages of 27.3 million people overall. The report also found that the bill would lift 1.3 million households out of poverty, and Sheirholz notes "nearly half of those would be kids" whose parents would receive a raise. At the same time, opponents of raising the minimum wage have noted that the CBO report also says such a raise could trigger 1.3 million job losses.

But Sheirholz, who was also the chief economist for the Department of Labor from 2014 to 2017, believes this number isn't right for a few reasons. She says increasing the minimum wage is one of the most studied topics in economics, and the CBO drew its parameters from that huge body of research. Economists generally agree that, among that literature, "the lower quality studies tend to find significant job loss, and the higher quality studies tend to find little to no job loss," according to Sheirholz. That the CBO's estimate for job losses is in the middle of those extremes likely indicates that it gave equal weight to all of the studies without accounting for their quality, she says.

Judy Conti, who is the government affairs director at the National Employment Law Project and was previously a legal services provider devoted to workplace justice at the D.C. Employment Justice Center, tells Bustle that raising the wage is about more than just numbers. She says it's about people and their dignity, as raising the minimum wage gives working class people more purchasing power where they can buy better food, clothing, and shoes for their families.

"Equally important, it gives more dignity to work," Conti says. "The sad fact of the matter is that in this country we are often far too valued by the wage that we make. So in addition to it being just impossible to support even one individual on a minimum wage or near-minimum wage job, there's also just an inherent undignified nature of paying something that low."

Conti notes that, of the 33.5 million workers that the EPI estimates would see a wage increase under the Raise the Wage Act, 19.5 million are women, 9.4 million are parents, and 4.6 million are single parents.

"Through the Fight for $15, I have met countless workers over the years who have been working in fast food or retail for six, eight, 10 years and have barely gotten a raise at all," she says. "These are loyal employees. They are highly productive because they know the business that they're doing so well, and the wages that they get are just downright disrespectful."

Multiple polls show that raising the minimum wage is also overwhelmingly popular with voters, including Republicans, according to Vox. So though the Raise the Wage Act is unlikely to become law anytime soon, it is almost guaranteed to come up again, and will be a factor in the upcoming 2020 election.

More like this
Twitter Has *A Lot* To Say About The "Single Penalty”
By Sam Ramsden
The UK Government Is *Finally* Banning Conversion Therapy
By Sophie McEvoy
6 Organizations Fighting Police Brutality That You Can Support Right Now
By Syeda Khaula Saad and JR Thorpe
Here’s Where The NHS Nurses’ Strike Currently Stands
By Sophie McEvoy
Get Even More From Bustle — Sign Up For The Newsletter
From hair trends to relationship advice, our daily newsletter has everything you need to sound like a person who’s on TikTok, even if you aren’t.