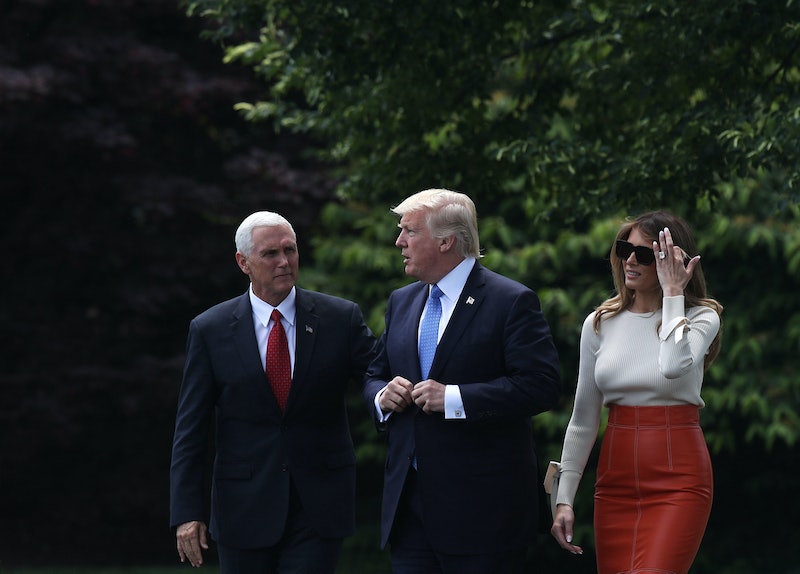 With so many incredible stories coming out of the White House, lots of people are trying to learn more about impeachment — including perhaps even the Trump Administration. According to what two sources told CNN last week, the White House lawyers have already started researching what it would take to impeach Trump and how the proceedings would work. The White House later denied those claims, but it does beg the question either way, what would it take to impeach Trump?

There may be a lot of speculation, but there's only one way this can happen, and it includes the GOP. To start with, Trump has to be found guilty of an impeachable offense. The Constitution lays out some ground rules for that. Article II, Section 4 reads:

The President, Vice President and all civil Officers of the United States, shall be removed from Office on Impeachment for, and Conviction of, Treason, Bribery, or other high Crimes and Misdemeanors.

So to start with, Trump has to commit a crime that fits into one of those categories. This almost completely depends on the House of Representatives, which is the body of Congress that votes on an impeachment charge. Thus it doesn't matter what the media or the Democrats say about impeachable offenses. It's just the House GOP.

They probably won't move to act until they're under increased pressure. For now they have some cover thanks to the appointment of Special Prosecutor Robert Mueller by the Justice Department to oversee the Trump-Russia investigation. Because he's respected by both political parties, and the process could take years, it's likely that the Republicans will first say he needs to finish his investigation before they can take any action.

That will play into what's best for them in two ways. As Newsweek's Emily Cadei argued, the Republicans want to use these years in power to pass their legislative agenda, not get caught up in an impeachment vote or following trial in the Senate. They'd rather repeal Obamacare and cut taxes for the wealthy, among other things.

On top of that, the GOP doesn't want to upset their base. Despite the fact that 48 percent of the country wants Trump impeached — versus just 41 percent against the idea — it's a highly partisan opinion. Republicans are against it and still support him. Only 23 percent of his party's members disapprove of how he's doing. That's an increase but far from a number that would cause Republicans to act.

So for Trump to be impeached, he would have to do something that causes these things to change. Is the GOP more likely to make progress on their legislative agenda by getting rid of Trump to work with a more professional Mike Pence? Or should they move ahead with Trump, trying to focus on legislation? Right now, they're probably going to accomplish more sticking with him. But that could change. The other thing GOP reps will be watching are those poll numbers.

The only thing then is to be careful what you wish for. Because what would come next under Pence is still a mystery.