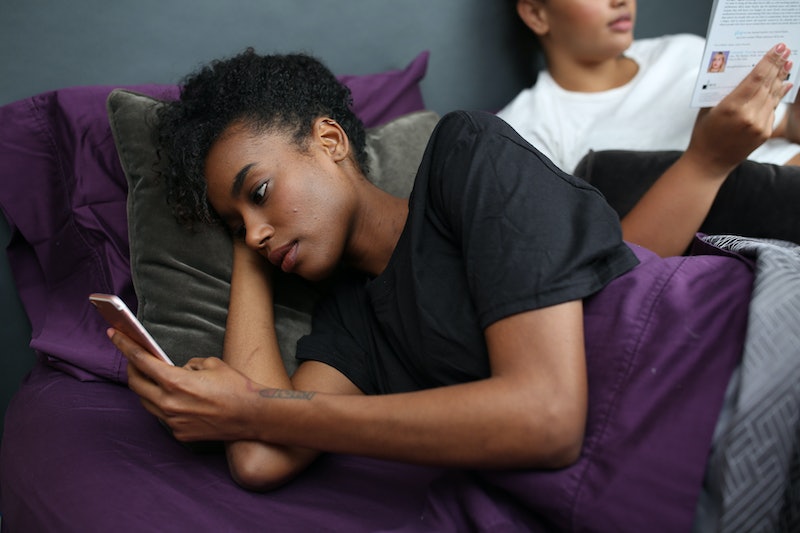 Is there anything worse than being interested in someone, only to eventually realize they're just *barely* maintaining contact so they can keep you around as a backup? If you ask me, it should be kind of a no-brainer that keeping someone on the back burner is a crappy thing to do — after all, no one deserves to be strung along by someone they have a potential romantic interest in. But unfortunately, it still happens, and new research reveals that it might be an even more prevalent behavior than we realized.

According to a new survey of 658 college students from researchers at Hope College, most young adults have at least one person who they consider a "back burner" relationship. Of those surveyed about their technological communication and relationship status, almost 73 percent said they have someone on the back burner — and that's not even the worst of it. Even among those in committed relationships, more than half (almost 56 percent) admitted to keeping at least one person on the back burner. But why is this bad dating behavior so common?

"I think the back burner phenomenon largely stems from social media and the unprecedented access people have into the lives of friends, exes, and crushes," Jonathan Bennett, Dating/Relationship Expert and Owner of The Popular Man, tells Bustle. "Maintaining a back burner relationship is as easy as typing a quick message and hitting send. With such ease of access to countless people, it’s not surprising that many men and women, even in relationships, keep those lines of communication open."

"Keeping the second best person as a backup probably comes from fear of being alone."

But aside from ease of access, people might also be inclined to have back burner relationships because they fear being alone, Bennett says. "Keeping back burners is probably a method of dealing with the risk that comes with having a lot of dating options," he says. "Once you commit, you eliminate all other options. However, if option number one doesn't pan out, you have to start over, which is a scary thought for some people. So, keeping the second best person as a backup probably comes from fear of being alone."

Here's Why Having Back Burners Is Harmful

It might be easier than ever to stay connected to our romantic interests, but that doesn't necessarily mean it's healthy to stay in contact with everyone you might have even a slight interest in. Regardless of your relationship status, keeping people on the back burner can be really detrimental to your dating life.

"Keeping back burner relationships can stop single people from actively pursuing meaningful connections in the present," Bennett says. "Having someone as a potential fall back option can stop you from actively trying to meet quality people and then fully committing to them. For those in relationships, it has the same result. By having a perpetual backup option, you’ll never be able to fully commit to your current partner."

It might seem like NBD to casually, occasionally text someone you're kinda-sorta into, but if your ultimate goal is to find (or, if you're taken, keep) a meaningful relationship, keeping people on the back burner won't help you reach that goal. You can't form or nurture a genuine connection with someone if someone else partially has your attention and interest — plus it's not fair to anyone involved to be in a half-in, half-out relationship.

"Back burner relationships are unfair, both to your current partner and the person you keep as a back burner," Bennett says. "First, your current partner doesn’t deserve for you to 'hedge your bets' on the success of the relationship by keeping a backup around. You should either commit to him or her or let go. Second, if you keep your back burner around, it also makes him or her think he or she has a chance at dating you. This is really a form of 'benching' and it’s unfair to give your back burner this hope. Keeping someone around who has feelings for you 'just in case' is ultimately cruel."

So even though it might be nice in theory to have someone (or someones) that you occasionally chat up for an ego boost or an extra bit of romantic attention, it's important to ask yourself whether that's worth potentially ruining your chances of having a real, all-in relationship with someone else. Ultimately, though, no one can tell you how to live your romantic life — so as long as you're aware of the potential damage back burner relationships can do to your dating life, who you choose to text (or not to text) is totally up to you.