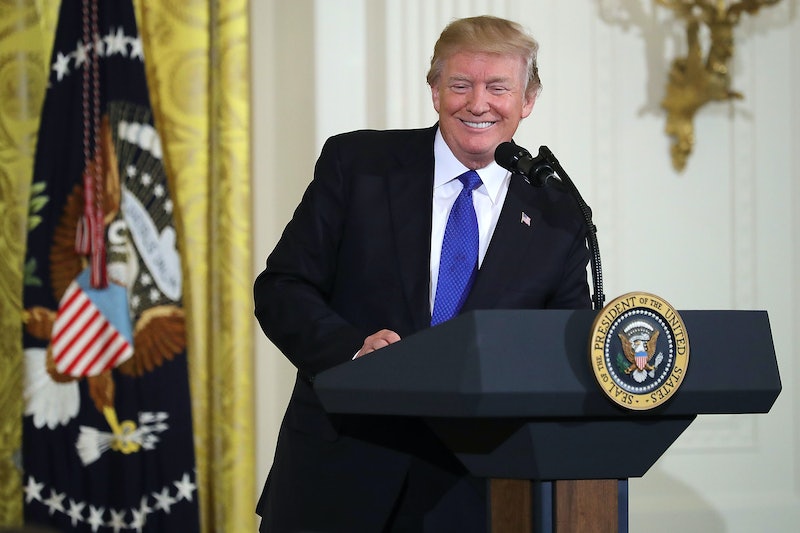 In the United States, a military parade hasn't happened in 25 years, but Trump wants that to change. According to a report in The Washington Post, higher ups at the Pentagon are putting the plan for a Bastille-Day-inspired spectacle into action at Trump's request.

White House Press Secretary Sarah Huckabee Sanders confirmed that plans for a parade were, in fact, under way. "President Trump is incredibly supportive of America’s great service members who risk their lives every day to keep our country safe," she said in a statement. "He has asked the Department of Defense to explore a celebration at which all Americans can show their appreciation."

Pentagon officials also confirmed that a parade was in the making. "We are aware of the request and are in the process of determining specific details," Defense Department spokesman Thomas Crosson said in a statement, according to the Post report. "We will share more information throughout the planning process."

Military parades generally feature a procession of both troops and various pieces of militarized equipment (like tanks). They function as a patriotic exhibition of a country's military strength and as a celebration of military accomplishment. In the United States, however, comparable events are generally reserved for regularly scheduled holidays, like Veteran's day or the Fourth of July.

The last time the United States planned a military parade on a national level was the summer of 1991, several months after the end of the Gulf War. Notably, the United States has not recently won any wars, and critics are likely to condemn such a parade as an excessive display of nationalism.

"The marching orders were: I want a parade like the one in France," said an unnamed military official in the Post report. Bastille Day, celebrated in France every year on July 14 , features a military parade. One has taken place just about every year since 1880. (Bastille Day, itself, commemorates the storming of the Bastille in 1789, when disgruntled commoners attacked a national armory as part of a violent explosion of class conflict.)

"I was your guest at Bastille Day, and it was one of the greatest parades I've ever seen,” Trump said. "It was two hours on the button, and it was military might and, I think, a tremendous thing for France and the spirit of France."

He then suggested that the United States should plan a similar event, adding, "To a large extent because of what I witnessed, we may do something like that on July Fourth in Washington down Pennsylvania Avenue." Tuesday's announcement indicates that he is, in fact, very serious about the idea.

As the Associated Press reported, world powers already know that the United States is a dominant military power, so a public parade showcasing American military strength could be considered unnecessary. There isn't a very real need to "prove" the scope, wealth, or breadth of the U.S. military to anyone else.

After the Post story broke, Twitter users reacted strongly to the idea of a military parade — and much of the initial response was negative. Users expressed concern about such a parade's cost, and further questioned whether the event was at all appropriate.

According to the Post report, the parade is in its early stages of planning, so any details — including an official date — are entirely unknown. Whether or not such an event will come to fruition waits to be seen.