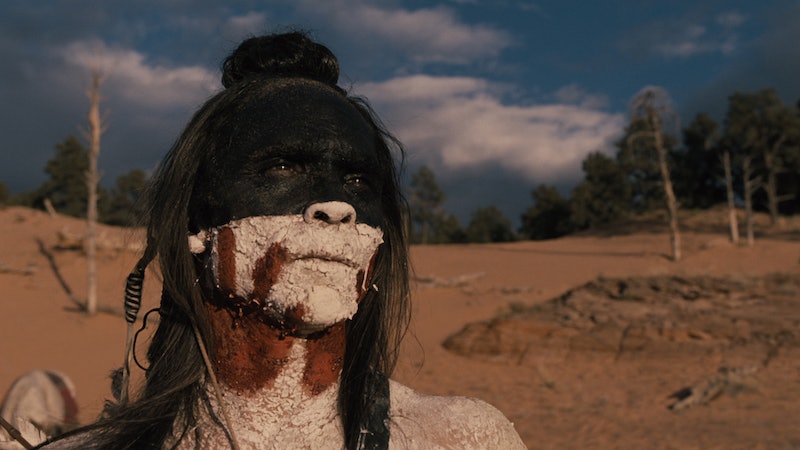 Major spoilers ahead for the "Kiksuya" episode of Westworld. Ever since the beginning of the series, viewers have heard vague warnings and references to the park's outermost borders and the wildness that exists there; in the most recent episode, "Kiksuya" (which is Lakota for "Remember"), fans finally get to see it for themselves. What's being built outside the park in Westworld? Ghost Nation leader Akecheta stumbles upon the answer in his quest — and it might be the linchpin that ties the entire season and its many storylines together.

Season 2's eighth episode hits the pause button after the violent events of "Les Écorchés" (and before the climactic events of the final two episodes), and served as an hour-long backstory for the Ghost Nation, which has hitherto been a vaguely defined threat lurking on the fringes of the story. The casting of Fargo breakout star Zahn McClarnon as the leader of the tribe indicated that big things were coming for the group in the sophomore season — but up until now, they had still mostly existed on the show to terrorize guests and trigger traumatic flashbacks in Maeve. Finally, viewers are introduced to the true significance of the Ghost Nation… and why they seemingly worship the Maze.

Originally designed as a member of a peaceful native tribe and living with his beloved Kohana, Akecheta was later upgraded from his "beta" version into a more violent, solitary version of himself when the park was about to open, in order to appease the blood-thirsty demands of the incoming guests. But when Akecheta stumbles across the scene of the massacre in Escalante — with Bernard and all the hosts slaughtered by Dolores — and discovers Charlie's toy maze, the sight triggers an awakening in him, causing his memories of his previous life with Kohana to resurface.

Was Akecheta actually the first host to successfully navigate the maze and "wake up," long before Dolores achieved the same self-awareness? So it would seem. Determined to escape this false world, Akecheta kidnaps a terrified Kohana and takes her to a place he'd uncovered in his lone wolf wanderings: the edge of the park, where he had found both a disoriented and dehydrated Logan Delos… and also some sort of massive construction in a valley.

(Although Akecheta manages to stir the beginnings of an awakening in Kohana, she is apprehended by QA before they can escape the park; her mind is wiped and she's placed in cold storage, replaced in her loop by a new host, much to Akecheta's dismay.)

What's that massive construction at the edge of the park? It's safe to assume that, with the season entering its endgame, this is viewers' first glimpse of the fabled Valley Beyond. If so, then every single disparate plot thread in the show seems to be heading there on a collision course: Dolores is going there to destroy the "souls" that Delos has "gathered" there; Charlotte and Bernard are going there to find Abernathy's control unit; William is going there in search of the "Door."

But what is actually there that everyone's so excited to reach? Given Dolores' talk of souls and everything fans have learned about Delos' secret immortality project, it's reasonable to assume that the Valley Beyond contains a version of the Cradle that holds not host backups, but the copies of all the human consciousnesses that Delos has copied over the years.

It was revealed that the Cradle was cooled by water; if the server in the Valley Beyond is also cooled by water… would it be enough to flood the valley if the server was destroyed? And could Delos also be storing copies of all the human bodies there, ready to be uploaded with the human consciousnesses? If so, might Dolores and her army transfer their control units into those empty bodies in order to escape the park without the C-4 in their spines exploding? If so, might that explain why all the host bodies found in the flooded valley were empty?

Westworld Season 2 is hurtling towards its conclusion, and Akecheta may have inadvertently revealed a huge piece of the puzzle. Will he also play a crucial role in how it all plays out? With only two episodes to go, fans will find out soon enough.