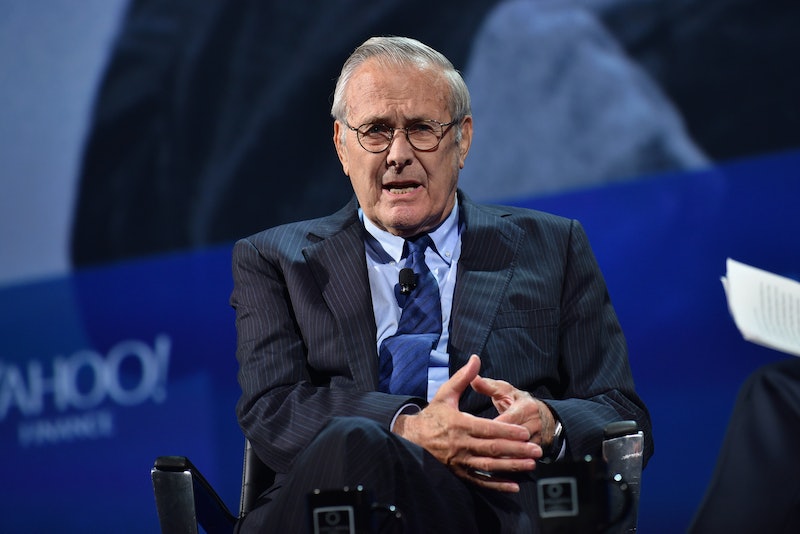 The Big Short director Adam McKay is back with yet another satire, and this time, he’s tackling the second Bush administration. Vice focuses on Dick Cheney (Christian Bale) and his quest to quietly gain power in politics. The film shows how Cheney became the protege of Donald Rumsfeld (played by Steve Carell), the future Secretary of Defense under President George W. Bush. As shown in the film, retired generals called for Rumsfeld’s resignation in 2006, citing his “failures in managing the war against Saddam in Iraq,” as reported by The New York Times. So what is Donald Rumsfeld doing in 2018?

His resignation marked his retirement from politics, so Rumsfeld, now 86, has mostly been keeping a low profile for the past decade. A year after his retirement, he founded the Rumsfeld Foundation, which, according to its official site, “rewards leadership and public service at home and supports the growth of free political and free economic systems abroad.” And in 2016, he also created Churchill Solitaire, an iOS game based on the version of the card game that Winston Churchill liked to play. The former politician even wrote a personal essay for Medium about releasing an app at the age of 83, and why making the game meant so much to him.

But one of the most notable things Rumsfeld has done since his retirement was to write a memoir in 2011 about his time in the Bush White House, titled Known and Unknown. It was his way of correcting what he claimed were certain misconceptions, while also acknowledging what he said were his mistakes. According to HuffPost, some of those mistakes include “claiming that the U.S. knew the location of Iraqi WMDs, not authorizing more troops after the invasion of Iraq, and not quitting after the Abu Ghraib detainee abuse scandal.”

Two years later, Rumsfeld was the subject of a similarly titled documentary, The Unknown Known: The Life and Times of Donald Rumsfeld, made by Academy Award winning documentarian Errol Morris. In an interview with The Telegraph, Morris said he was inspired by Rumsfeld’s memoir, particularly his recurring mention of his memos, referred to as “Snowflakes.” Morris managed to convince Rumsfeld to read some of them on camera, making them the main focus of the doc. “It is a movie about a guy who has surrounded himself with words,” Morris said. “Framed by memos, the recitation of memos: the endless evasions, confusions, obfuscations.”

The Telegraph also reported that some of the memos Morris had Rumsfeld read focused on “the failure to respond to intelligence warnings of the 9/11 attacks; the misleading links made between Saddam Hussein and al-Qaeda; the false evidence of weapons of mass destruction used to justify the invasion of Iraq; and the ‘torture’ at Guantánamo Bay.” But Rumsfeld refused to take blame for those missteps on camera, nor does he acknowledge his alleged lies.

Despite Rumsfeld’s reluctance to open up about these accusations, The Unknown Known became a critically acclaimed documentary, for letting Rumsfeld’s detached reaction to Morris’ questions speak for itself. It’s clear that Rumsfeld is eager to forget his Bush administration days and move on to less pressing pastimes.