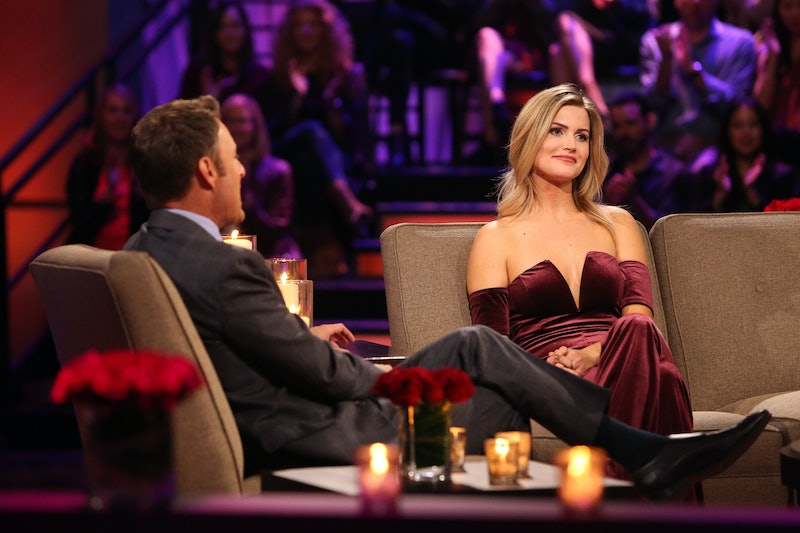 Every now and then, a show introduces a new word or phrase into the American vernacular. Seinfeld gave us "man hands" and "yadda yadda yadda." Grey's Anatomy brought vajayjay into common use. And now, The Bachelor, 22 seasons in, has given us a new phrase — glam-shaming. It's a thing, and Marikh was very, very conscious of how the other women in the house were "glam-shaming" her while competing for Arie's attention. But what is glam-shaming on The Bachelor?

From the little bit of explanation viewers have been given, to glam-shame someone is to mock or put down a person because he or she spends a great deal of time getting ready, aka glamming up. It's not a gendered act, but in the case here on The Bachelor, Marikh was convinced that Chelsea had been glam-shaming her behind her back in the Bachelor mansion because Marikh was looking in the mirror a lot and fixing her hair. Glam-shaming made its first appearance in a credits segment at the end of Episode 4. Marikh thought Roy had something to say to Arie about Marikh's grooming habits after Chelsea allegedly noticed that Marikh was checking her reflection in a compass while on a group camping date in Lake Tahoe with Arie.

Marikh was upset, and Chelsea said, "I saw it with my own eyes you brushing your hair. I wouldn't make something up." Marikh replied, "You're like, glam-shaming me!" In a private interview, Chelsea felt like she had to clear the air, and she told the camera and producers that she has, and always will be, pro-glam. She was a model at one point, so being glam was a big part of that.

Glam-shaming shows the rich and unfair dichotomy that women face on a daily — nay, minute-by-minute — basis. Be pretty and wear enough makeup to make it look like you don't have any makeup on. But you can't be like, vain about it, and you also can't take that long to get ready because that means you care way too much about your appearance and you're shallow. But make sure you spend some time getting ready because if you look tired or sallow, it means you don't care about your appearance and no one — and I mean no one — will ever love you. Did I get that right? (Reader, I did.)

Personally, I don't think Chelsea really meant anything by commenting on Marikh checking her appearance, because using a compass as a mirror is both funny and ingenious. This group date was a date in which the contestants had to eat bugs and drink their own urine, so, honestly, if that was the most egregious thing that happened in Marikh's mind, she is a strong person.

On the Women Tell All show, Chelsea asserted again that she wasn't judging Marikh — her statements weren't meant to be malicious. Some of the other women agreed with Chelsea, some agreed with Marikh, and shrug. It seemed like they came to a place of getting over it — but nope. Following the show, Marikh sent some tweets that made it seem like she's not really over it at all.

While this is something that's clearly important to Marikh, is this the Bachelor hill that she wants to die on? This is the segment that will correspond to Marikh for, all of Bachelor history from here on out, so I hope that she's happy with the fact that she'll forever be associated with need to make sure that every person, no matter their sex, race, creed, or religion, can glam it up anywhere, anytime.

The end of the segment came and went, and Chelsea and Marikh were at an impasse. In any case, I think we should all agree that being pro-glam is the way to go. Those who glam shouldn't throw glass stones at others who glam differently.