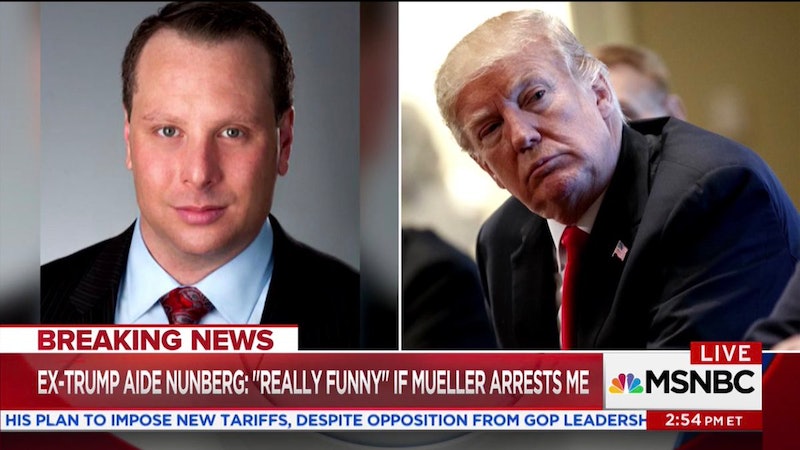 On Monday, a former Trump aide went on record saying that he will no longer cooperate with an investigation into President Tump's potential and alleged collusion with Russia during the 2016 election. Sam Nunberg cited a subpoena and a request to appear before a grand jury, informing several news outlets on Monday that he was done working with the investigation, which is being led by special counsel Robert Mueller.

"Let him arrest me," Nunberg said in an interview with The Washington Post. "Mr. Mueller should understand I am not going in on Friday."

"I’m not spending 80 hours going over my emails with Roger Stone and Steve Bannon and producing them,” Nunberg told The Post. "Donald Trump won this election on his own. He campaigned his ass off. And there is nobody who hates him more than me."

Nunberg has not worked for the Trump campaign since August of 2015, when he was fired after posting a series of racist Facebook posts.

Nunberg said that he believes the Mueller investigation is seeking information about former Trump aide Roger Stone. Nunberg described Stone as his mentor.

"They want me to testify against Roger," Nunberg told CNN's Gloria Berger. "They want me to say that Roger was going around telling people he was colluding with Julian Assange. That's what they want. I'm not going to do it."

Julian Assange is the founder of WikiLeaks. Nunberg said that Stone did not work with the him.

Stone, another former campaign adviser, quit the Trump campaign shortly after Nunberg was let go. As the Russia investigation has unfolded, Stone was asked by House Intelligence Committee members about potential ties to Assange. He has consistently denied any wrongdoing. In a recent statement provided to CNN, Stone doubled down on his innocence:

I was briefly part of the Trump campaign and has [sic] been the President's friend and adviser for decades; and would expect that Mueller's team would at some point ask for any documents or emails sent or written by me. But let me reiterate, I have no knowledge or involvement in Russian Collusion [sic] or any other inappropriate act.

Among Nunberg's complaints about the subpoena was that it would take him an extremely long time to compile the information that was requested. Some of the people whose communications with Nunberg the investigators are interested in seeing, such as Bannon and Stone, Nunberg said he communicated with every day.

Nunberg further decried the subpoena in an interview with CNN's Jake Tapper.

"I agree that it seems like a lot of time but it is law enforcement telling you that you have to do it," Tapper said. "Are you actually willing to go to jail for this?"

"I'm not cooperating. Arrest me," Nunberg responded, later adding, "You want to arrest me? Arrest me."

He then defended his stance using language frequently employed by the president. "You know what? When they start asking for stuff like this, Trump is right — it's a witch hunt."