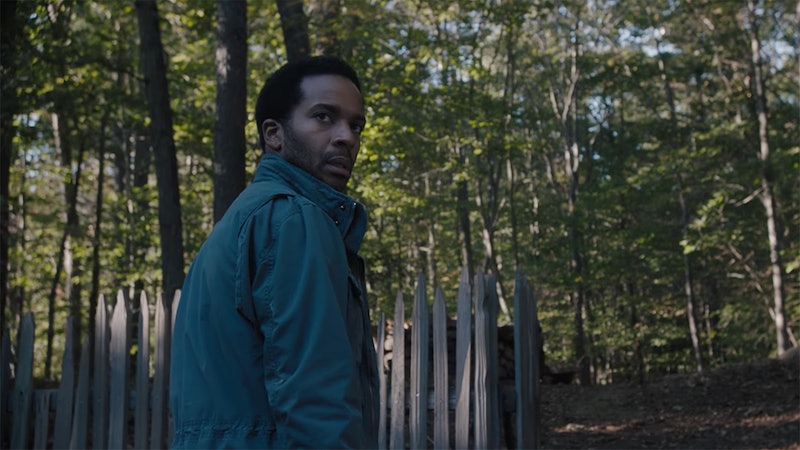 Stephen King fans have made it a sport pointing out all the Easter eggs in Hulu's Castle Rock, from the clue-laden opening credits to the Cujo references. But is there one bread crumb fans haven't picked up on yet? The question of what Henry is hearing on Castle Rock may find its answer in a lesser-known King work. Spoilers through Episode 6 ahead.

In Episode 6, "Filter," Henry Deaver learned that the persistent ringing in his ears is caused by a pseudo-scientific phenomenon called the "schisma." Henry's father, Reverend Deaver, believed the schisma to be the literal Voice of God, but deaf scientist Odin Branch explained to Henry (through his interpreter and protégé Willie) that he believes the schisma is actually the result of the universe attempting to reconcile multiple different timelines in a place where the membrane between those alternate realities wears thin.

Most fan theories about the schisma revolve around King's The Dark Tower series. Some viewers, like Reddit user Harry_Seaward_1128, have pointed out the similarity between the schisma and something called a "thinny" — a concept introduced in The Dark Tower, referring to a place where the fabric between alternate realities wears thin. But what if the schisma actually has its roots in another, less popular King novel?

Redditor mander4ever has one theory about what might be causing the buzzing noise Henry is hearing: something called the Subaudible. Originating in King's 1999 book The Girl Who Loved Tom Gordon, the Subaudible is spiritual presence invented by the protagonist's father, Larry MacFarland. When young Trisha gets lost in the woods, she remembers how her father, a devout atheist who doesn't believe in the presence of a sentient God, invented his own religion around a mindless, benevolent force who only makes its presence known through sound. The passage reads:

"That's because you got used to it, but take my word, Trish, that sound was always there. Even in a house where there aren't any baseboard heaters, there are noises. The fridge goes on and off. The pipes thunk. The floors creak. The traffic goes by outside. We hear those things all the time, so most of the time we don't hear them at all. They become... subaudible. I don't believe in any actual thinking God that marks the fall of every bird in Australia or every bug in India, a God that records all of our sins in a big golden book and judges us when we die —I don't want to believe in a God who would deliberately create bad people and then deliberately send them to roast in a hell He created — but I believe there has to be something. Yeah, something. Some kind of insensate force for the good. I think there's a force that keeps drunken teenagers — most drunken teenagers — from crashing their cars when they're coming home from the senior prom or their first big rock concert. That keeps most planes from crashing even when something goes wrong. Not all, just most. Hey, the fact that no one's used a nuclear weapon on actual living people since 1945 suggests there has to be something on our side."

As Trisha tries to find her way out of the woods, she begins to believe she hears the Subaudible; eventually, the force even manifests itself in the shape of her father. (It explains that it can only appear to a person in the guise of someone that person already knows because it's too weak to conjure unique forms.) Eventually, the Subaudible and her guardian angel Tom Gordon help Trisha defeat the evil God of the Lost and find her way out of the woods again.

A young child lost in the forest? A mysterious sound that could be referred to as the Voice of God? The Subaudible has a lot in common with Castle Rock's schisma. Could the schisma actually be the physical effect of some incorporeal presence — some benevolent spirit helping to guard the town against whatever malevolent force is wreaking havoc? If so, Henry's connection to the schisma, the way he seems hyper-attuned to it, could make him an integral figure in the upcoming fight against the forces of evil.