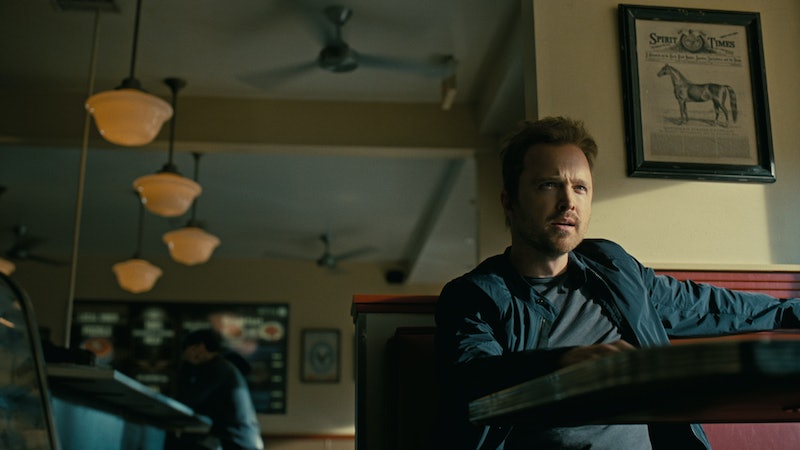 Spoilers ahead for Westworld Season 3, Episode 3. It's not long before Caleb discovers the cost of aligning with Dolores in Westworld's March 29 episode. After helping Dolores escape from her shootout with Connells, Caleb pops up on the Rico app as a high-profile target. He's captured by two other mercenaries-for-hire, and they torture him by activating the thing in Caleb's mouth — aka a "grip," which interfaces with Incite's "ID8" tablet app.

Incite's technology is rarely explained, but according to the auxiliary website the show set up for the company, it does basically everything you can think of. Through Rebohoam, Incite controls all transportation and people's everyday lives, and they also produce mood-altering tablets called "limbics" that send impulses straight to the brain in order to create a customized sensation. This is what you see both Caleb's mom and the murdered investor in Episode 1 taking before bed. Incite's website explains that these are activated by "a small, painless metal implant that is carefully contoured to the roof of your mouth, which pairs instantly to Incite’s ID8 app."

Anybody can get the Incite implant, but because Caleb served in the military, his has advanced features. One of the mercenaries says him turning off his grip is "a waste" because "people would pay a fortune for a military grade one."

By turning on Caleb's military grip, the mercenary is able to view — and most importantly, control — all of Caleb's vitals, including his "hormonal response," "metabolic response," and heart rate. With a simple swipe on the tablet, he's able to essentially give Caleb a heart attack. If Rehoboam making predetermined paths for people is meant to mirror the hosts' loops, then the military grip is like the equivalent of the hosts' code forcing them to obey an engineer's commands.

The more that Westworld Season 3 unfolds, the more we see the dangers of technology becoming too pervasive and all-encompassing. The monitoring of soldiers vitals in the field is a commonly discussed topic in real life, with ideas ranging from "smart shirts" to tiny wireless patches on the neck. But Incite has taken "smart wear" several steps too far: anybody holding an ID8 tablet can control a human soldier like a robot, and torture and kill them at will.

As Westworld tells us every episode, the real world is quite literally Westworld with human hosts. This means that just as Maeve and Dolores learned how to use the engineer's tablets to turn the tables on the humans and other hosts, it's likely we'll see Dolores and Caleb using the ID8 app and the Incite grips in the future. In a Westworld Season 3 trailer, for example, we see somebody inserting a grip into William's mouth, likely to torture or control him. Incite may have thought they were optimizing and simplifying humanity by making the world so tech reliant, but they make have just manufactured their own demise.