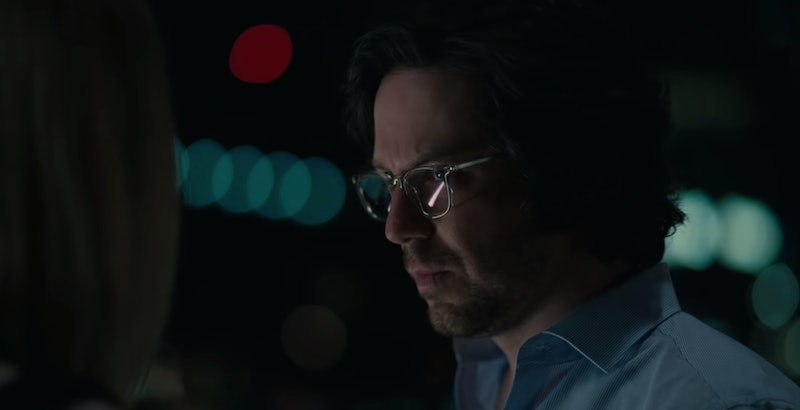 Spoilers ahead for the premiere episode of Westworld Season 3. Dolores finally managed to escape the park at the end of Westworld Season 2, and in Season 3, we see her slowly infiltrating the human world —beginning with a few powerful tech magnates. After she steals the fortune of a wealthy investor, Dolores goes to meet up with her boyfriend Liam Dempsey (John Gallagher), who is the head of Incite. What exactly the company does isn't fully explained in the episode, but it centers around a massive data core named Rehoboam that "optimizes" individuals' lives by putting them on a set path.

"The world is complex, complicated, messy. But life doesn't have to be," Liam's dad, Liam Dempsey Sr., says in an Incite promotional video released ahead of the season. "The future is powered by you. And we know you." Dempsey Sr. boasts that Incite's Rehoboam has "unprecedented computing capabilities" that analyzes data to solve life's "most unsolvable problems." According to the company's website, that includes everything from showing you "who your real friends are" to winning "you your dream job."

With Incite, he says, "the only choice you'll have to make is us." The final shot is a digitized eye, which suggests that Incite's tech is an implant; this would explain why everyone we see is plugged in to some tech, and why Liam's friend frets about living in a simulation à la The Matrix.

We later learn that Liam is Incite's CEO only because his father passed away recently. Liam doesn't specify how his dad died, but it's implied he may have been killed as a result of a shady coup by Serac, his former partner and Rehoboam's original architect. Dolores obviously got close to Liam hoping to get more intel about Rehoboam, but unfortunately, he reveals that he's never been able to control Rehoboam. After Liam's father died, Serac completely locked him out of the system.

"I have read access to the outer layers but nothing deeper," Liam tells Dolores, adding that he wishes he could shut down Rohoboam entirely. "I go to the office, I spend the money, but I'm a figurehead. No one knows what the system is doing, other than its original architect."

Liam is clearly afraid of Serac, which further supports the idea that Serac may have killed his father to gain control of the company. He explains to Dolores that he can't even think about telling her about Serac because "he would know already. Rohoboam would tell him. And I'd already be dead, just like my dad."

Ultimately, Liam ends up not being a nice guy, since he says that he's fine with his bodyguard killing Dolores as long as it doesn't "blow back" on him. But really, Liam is totally powerless in this scenario. He clearly isn't running anything, and if Dolores' goal is to hack Incite, then he simply isn't useful to her. We'll likely continue to see Liam, since the episode ends with Dolores replacing his bodyguard with her own host copy. But even if he does figure out what Dolores is planning, he doesn't stand much of a chance against her.