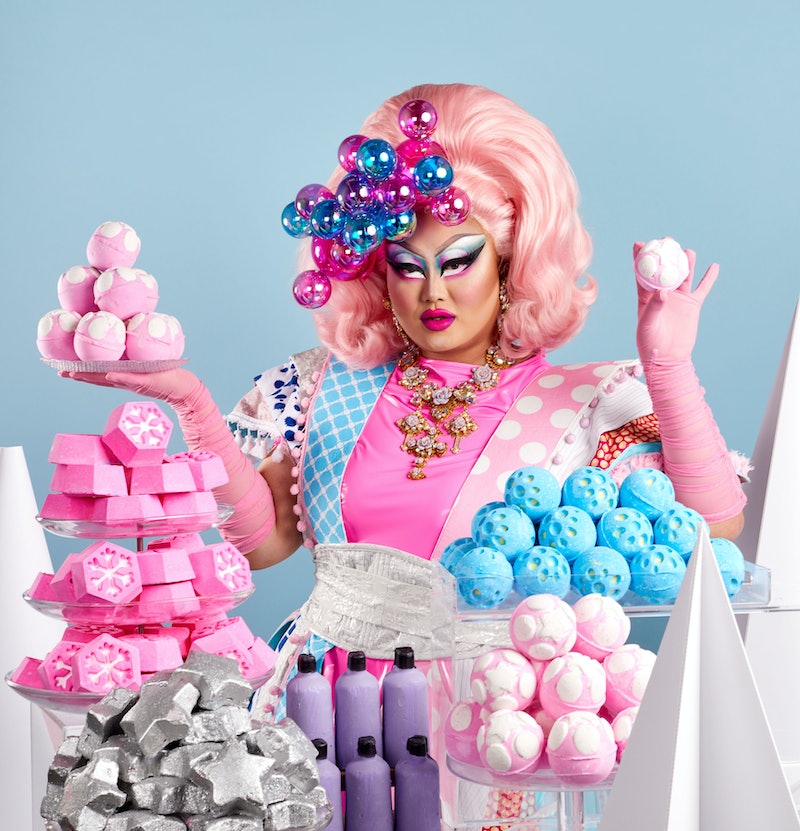 Before you know it, you'll be running around town like a headless chicken for last minute Christmas gifts. The routine rubbing of the temples will kick in and you'll need something soothing, quick. But you've got SheMail this Christmas season, and the message comes straight from Lush Cosmetics' new holiday range featuring Kimchi, Detox, and Shea Couleé from RuPaul's Drag Race. Can you say "Yas, queen?" Thought so.

Ringing in the season with a new line of colorful bath bombs and body conditioners, Lush serves its fans with three of Drag Race's most coveted queens. Inspired by the cosmetic brand's holiday collection, all three queens will show out in full drag looks across its 250 shop windows.

Each queen will have her moment to be featured throughout the campaign from November to early December, bringing you festive realness. In a series of bath bombs, soaps, bubble bars, and shower gels made for the Yule Tide, each queen's look represents a theme in the line.

In a press release, Lush noted how each queen wears her Lush-inspired look. Kimchi's theme for her campaign is Cheery Christmas Vibes, Detox represents Dripping Luxury in her campaign and Shea Couleé brings it all the way back to a Classic Christmas.

One thing's for sure, these queens came to sleigh all Christmas day.

Starting with Season 9 finalist, Kimchi, who brought other-worldly "lewks" to the runway and holds nothing back in this bright Judy Jetson silhouette.

“There’s a lot of fun vibrant colors, and I tried to mix a lot of prints, textures and colors," she said in a press release. "So a quilted masterpiece is what I’m serving you." She could turn dirt into gold.

All-Star Drag contestant Detox who donned killer gowns glams up in one dipped in luxury gold for her campaign.

"My look is a little vintage and nostalgic," she said. "Kind of like 50’s glamour housewife, hosting a holiday party…with Lush product.”

In the final weeks of the campaign, Ms. Shea Couleé delivers evergreen and peppermint. The Season 9 Finalist wore an all red gettup with a party on top and evening wear on the bottom.

"I wanted a look inspired by 50’s negligees and nightwear that references those 50’s silhouettes," she stated, "but with a little bit of whimsy in there... all out of repurposed materials.”

If you're struggling to find the perfect gift for someone, a bubbly bath bomb might be the thing to gift someone after the holiday hype ends.

It'd be hard to believe someone would deny a soothing body product for a gift, but let this one be a drag you want.

More like this
Benefit Just Upped The Brow Game – Again
By Justine Knight
This K-Beauty “Wrinkle Bounce” Stick Is Going Viral On TikTok
By Destiny Knight
Meet Foreverist, The Skin Care Brand That Keeps Tattoos Looking Fresh
By Audrey Noble
Kendall Jenner's Cowboy Boot Tattoo Is The Cutest Micro-Ink
By Sophia Moore
Get Even More From Bustle — Sign Up For The Newsletter