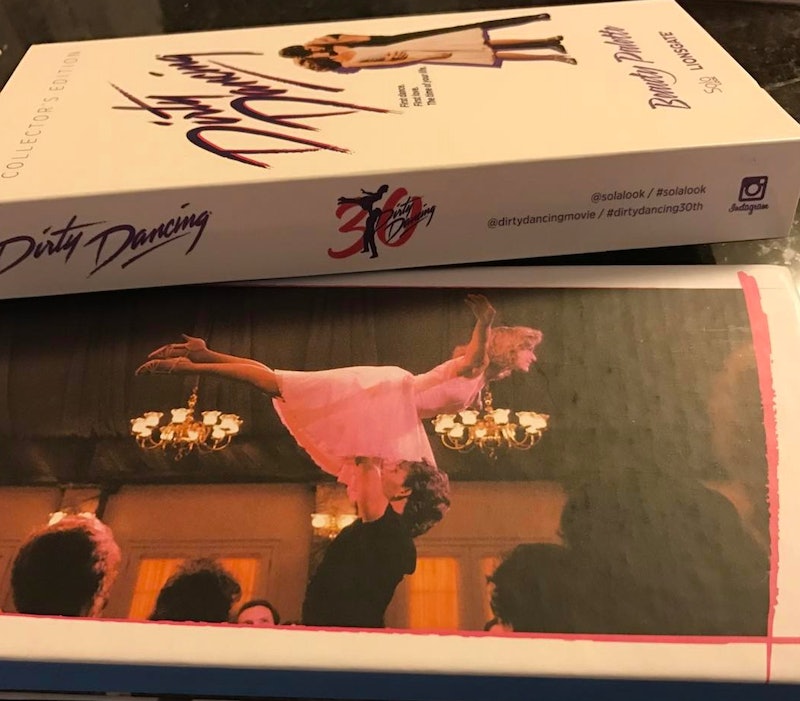 Nobody puts Baby in the corner and nobody will be able to deny your makeup prowess, thanks to the Sola Look Dirty Dancing Palette. The palette is coming out in a semi-staggered fashion. According to an email Bustle received from Sola Look and based on the brand's detailed Instagram post, the official Dirty Dancing Palette release date is Saturday, Apr. 22, which is also Earth Day. However, for the impatient and excited makeup mavens who want to get their hands on this palette sooner than later, there is a pre-order set for 3 p.m. ET/12 p.m. PT on Saturday, Mar. 18. A thousand palettes will be made available then. If you pre-order, your card will be charged at that time, but the palette won't ship out until Wednesday, Apr. 12. The indie brand is also enforcing a two-palette limit per customer. This thing is that hawt! But what's inside the Sola Look Dirty Dancing Palette?

Let's go under the hood.

While the Sola Look Flashdance Palette boasted four large pans of matte eyeshadow, which were flawlessly combined with imaging from the famous '80s film, Dirty Dancing features even more product!

There are four eyeshadows — including a matte, leather jacket black named "Johnny Castle" and a hot pink hue— as well as a pressed highlighter and a matte liquid lippie formulated by Depechegurl of Cryptic Cosmetics; Depechegurl previously collaborated with Sola Look for a super velvety liquid matte.

The products were inspired by film scenes, lines, and characters, while the palette, which arrives for the film's 30th anniversary, also features original photos from the film. Ack! So amazing, right? Also, Sola Look x Dirty Dancing will cost you $36.

Each element of the palette shakes out to about $6 a piece.

There is a ton of info in this caption. Take it all in!

I love that Solalook has crafted palettes based on beloved '80s dance movies!

Is there a palette taking inspo from Footloose or Fame in Sola Look's future? You never know. Let's just enjoy Dirty Dancing. Even if you are too young to remember the film, get acquainted with it now and open your arms to this palette.

More like this
This Danessa Myricks Palette Has Me Excited About Colorful Eyeshadow Again
By Olivia Rose Ferreiro
The 12 Best November 2022 Beauty Launches, According To Our Editors
By Rachel Lapidos
20 Beauty Gifts Under $25 That Make Perfect Stocking Stuffers
By Jordan Murray and Audrey Noble
This Week’s New Makeup Releases & More Beauty Headlines
By Audrey Noble
Get Even More From Bustle — Sign Up For The Newsletter