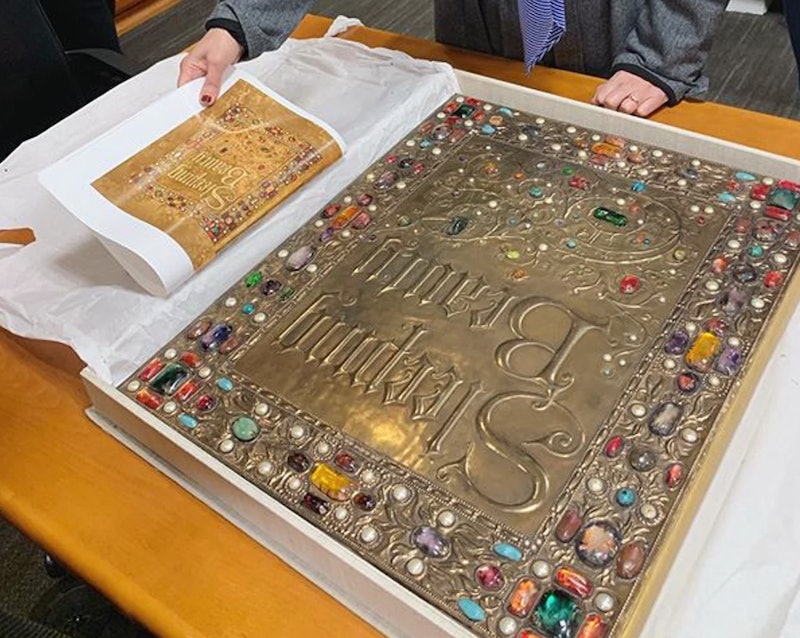 Bésame Cosmetics is known for its Disney-inspired makeup collections. The vintage brand often uses the exact inks and colors from classic and animated films of the past to create products. Bésame's Sleeping Beauty: The 1959 Collection was inspired by the 1959-released film and it might be the brand's best assortment of Disney-themed makeup to date. That's saying something, since the brand dropped a Snow White range, a Peter Pan x mermaid-inspired collection, and a Mickey Mouse set. What's so awesome about the Sleeping Beauty collection is the fact that every piece captures the essence and the elements of Aurora and Maleficent. Qualities of both of the fairytale's main characters are well-represented. The Sleeping Beauty collection arrives online via the Bésame Cosmetics site on Aug. 23.

Bésame founder Gabriela Hernandez, who touts herself as a cosmetics historian in her Insta bio, revealed all of the details of this range in a live Instagram story on the brand's official feed on Aug. 21. She shared that she has been working on this collection for over a year-and-a-half. Hernandez dove deep into the Disney archives and even spent time with the actual storybook. Therefore, the collection features a book-shaped container inspired by the details of the castle and the fairies from the story.

Bésame's Sleeping Beauty: The 1959 Collection is incredibly collectible on every level. The packaging includes sketches, cells, and details about the ink colors used for both Aurora and her nemesis Maleficent in the animated film. The products and the design pull heavily from the past but they are still wholly modern and utterly gorgeous.

The Sleeping Beauty collection features an eyeshadow palette that is packed with 20 highly pigmented shades in the bright and neutral families. The colors reference things like Aurora's dresses, Maleficent's staff, and both of their skin tones and eyes, which Hernandez revealed during the live Insta story. She clearly pays close attention to every last detail.

There are also several compacts in the Sleeping Beauty collection. One holds four extra large pans of blush and highlighter. There is another single-highlighter compact. Both are keepsakes that you are going to want to repurpose as décor upon finishing every last speck of the product contained within. Bésame is making sure you get your money's worth.

The graphics are just darling, aren't they? Another "must own" product in this range is a gold locket that is a reproduction of the front of the book. It contains a little blush that can be used on either lips or cheeks. Once you hit pan, you can replace the product with photo or just wear it as a regular necklace.

Bésame is known for its classic lipsticks and there are three in this range. There's Aurora's pink, Maleficent's magenta, and a blue bullet lippie that switches to pink when swiped across your lips. The latter was inspired by the film's fairies. Hernandez was quick to point out that many fans of the film think that Maleficent's signature lip shade is red when it's actually a deep, bright pink. That's just another element of juxtaposition between Aurora and Maleficent that's spotlighted by Bésame.

The final piece in the collection is the golden Sleeping Beauty hand mirror. It's defined by a long and lean handle, which was inspired by the lines of Aurora's dress. It'll look beautiful when stored on your vanity.

If you are a Disney Princess diehard, are Team Maleficent, or simply love the story of Sleeping Beauty, you are going to want to own all of the pieces in this collection. Bésame created a truly balanced collection that highlights the princess and her foe.