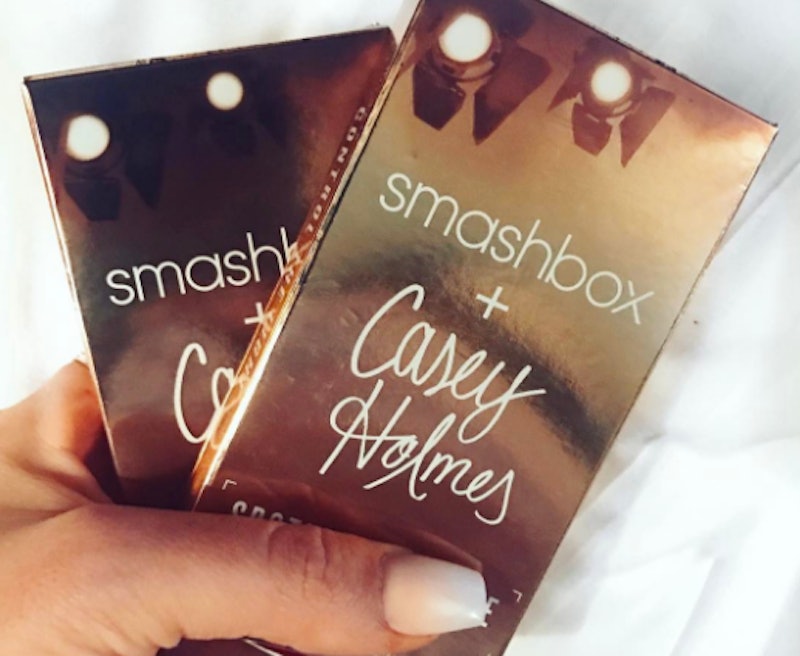 The day you've been waiting months for is finally here. After keeping her fans waiting for the exciting news, Casey Holmes showed her Smashbox products on social media. Trust me when I say you will be instantly excited after seeing the packaging. What is the Smashbox x Casey Holmes collab? She didn't say exactly what the product is, but of course that hasn't stopped fans from guessing, and the caption of the Instagram photo says a lot.

There has been radio silence from Holmes since she first announced that she would be partnering with Smashbox. People have been frantically trying to guess what the product is since she made the announcement, but it's time to narrow those speculations down. According to her social media post, the product is called Control The Light. The caption says "two is better than one", which has lead her fans to think that there will be two different shades available.

If you put all of those pieces together, it sounds like it could very well be a highlight and contour palette or something similar, at least that's what a lot of her fans seem to think. She got on Snapchat a few hours after posting the sneak peek to say that some of her fan guesses were correct, but she didn't confirm which ones.

According to the post, the Smashbox x Casey Holmes collab will be available on Feb 17. There's also a chance to get the product one day early, but she didn't say how just yet. People were instantly excited by the news. Here are some of their guesses, so you can decide for yourself what you think the product is.

Control The highLIGHT... get it?

Of course, it could be two completely different products as well.

A spotlight eyeshadow palette would be gorgeous.

It doesn't even really matter, because people love it already.

She could possibly do a complete face look all at once.

No matter what it ends up being, there's no doubt in my mind that it will be a best seller.