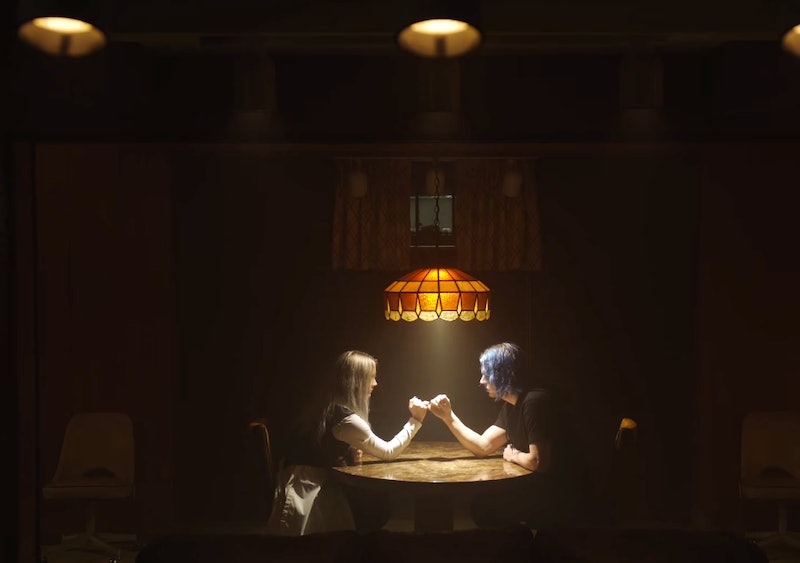 Before American Horror Story: Cult premiered, fans already knew that Evan Peters' character Kai Anderson would be the head of a radical group. But what wasn't explained — and still isn't clear from the Sept. 5 premiere of AHS: Cult — is how he's related to Billie Lourd's character Winter Anderson. These two share a last name, but is it too obvious to say that they're siblings? What's the relationship between Kai and Winter on AHS: Cult?

They seem to live in the same home and nothing romantic occurs between them in "Election Night," so that they're brother and sister certainly wouldn't be out of the question. Yet, since their relationship isn't explicitly stated — and remembering that Kai is skilled in inspiring loyalty in others — Winter could have a more twisted connection to Kai than just sibling.

While Kai celebrates when Donald Trump wins the presidency, Winter is in mourning that Hillary Clinton lost. And when Kai enters her room after the election results come in, they banter as if they could be siblings. That, combined with their pinkie game where once Winter locks pinkies with Kai she must tell him the truth, sure seems like brother-sister behavior. However, cult leaders in both fiction and reality are known for having compounds where all of their cult members commune and live. And Kai's pinkie pact seems to have more power than just a child's game, so perhaps Winter is one of his followers.

If she is a part of Kai's cult, then that would explain why it's not clear if she's his sister or his girlfriend since relationships in close-knit and unconventional groups can be complicated. She could have also taken on his last name as part of her pledging her membership. After all, Winter has an unconventional hair color, just like Kai, so maybe the rules of this group is that you've got to dye your hair and become an Anderson.

While it's totally reasonable to assume that Winter is simply Kai's sister, he does hold a special power over her, regardless of their relationship to one another. After doing their pinkie swear, where Winter admits to dreading children, she gets a job being a nanny for Ally's (Sarah Paulson) child. She seems to be conquering her fears — something Kai refers to earlier — so she can rise above them. So no matter how she's related to him (or the fact that they voted for different people), Winter seems to have come to Kai's side of thinking on Cult.