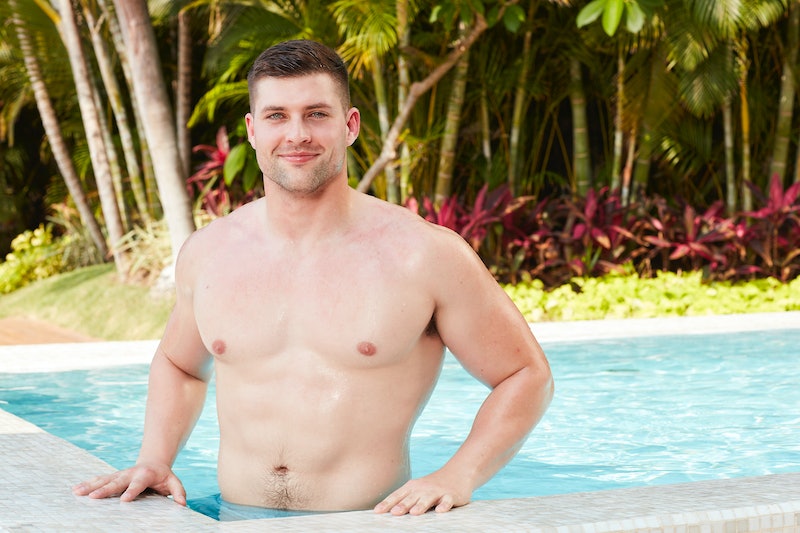 Hannah's Bachelorette contestants didn't have a ton of downtime between when her season finished filming in May and when they left for Bachelor in Paradise, but it was enough time for fans to get a sense of their lives post-show. After Hannah's Bachelorette season, Kevin got back into the swing of his everyday life — which mostly includes going to the gym and taking a lot of selfies. And taking a lot of selfies at the gym.

Kevin's ABC bio from Hannah's season lists the Illinois resident as a behavioral health specialist, but it looks as though he might be trying to branch into a new field of work post-show. According to Concordia University — Portland, behavioral health specialists can help give counseling to people struggling with things like addiction, mental illness, and more. Now, however, Kevin is looking to help people with another challenge — working out.

It's clear from one glance at Kevin's Instagram page that he's a fitness fiend. He regularly posts updates on his progress, selfies from the gym, and his preferred post-workout meal of Chipotle. His Facebook is more of the same, with his most frequent posts being check-ins at his local fitness center. So it's no wonder that he's looking into personal training as a career. His Twitter bio now reads, "Serious inquiries about personal training msg me!!" But if he's really getting into the training business, he might want to consider upping his photo game — this pic looks like it was taken in 2008 on a disposable camera. But I digress.

When he's not working out or eating Chipotle (which appears to take up most of his time), Kevin can sometimes be found streaming live on the gaming platform Twitch. He's also a big fan of posting throwback shots of himself, which he lightly mocks in the captions.

"#tbt to when I thought I was nobody... but look at me now! Still not anything special!! Just shorter hair and a worse smile!" he captioned the below photo:

And this photo from when he was 14 is captioned, "14 year old Kevin with that poppin @justinbieber hair! Who would have thought I'd end up on @abcnetwork chasing a stranger on the @bacheloretteabc !"

Kevin's also been known to practice his Zoolander look:

And he recently got a haircut in June. He captioned a pic of his new 'do, "New haircut looking crisp! Look good, feel good, lift good! Hope you are all having a great day! Much love @bacheloretteabc fam!"

Besides hoping to step into the personal training arena, Kevin is looking to pick up some extra cash on Cameo, where you can purchase a video message from him for $30. If you ever decide to request one, might I suggest you ask him to do a lip-sync, because this video is kinda fun.

Kevin is stopping by Bachelor in Paradise starting Aug. 5, and it seems like he's ready to have a good time. As for whether or not he'll find love, fans will just have to watch to find out.