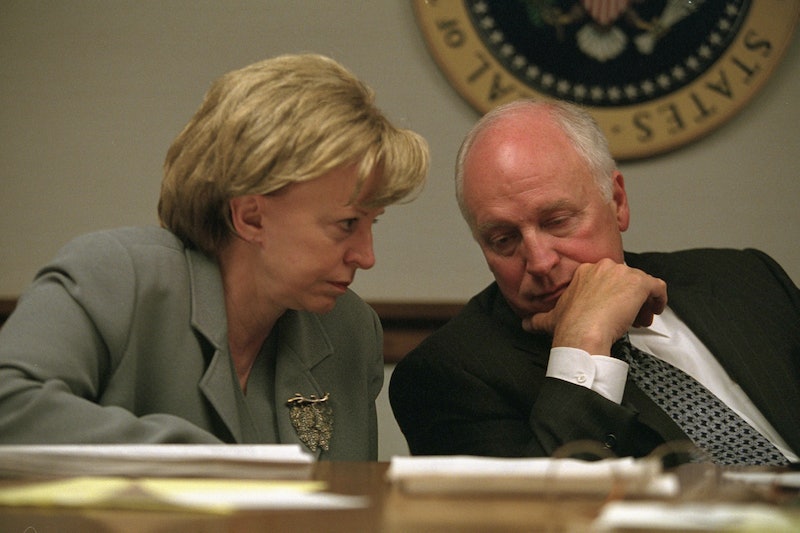 For Adam McKay's follow up to 2015's Oscar-winning biographical film The Big Short, the writer/director is taking on another harmful subject from the George W. Bush era: Vice President Dick Cheney. McKay's new film Vice examines the rise and reign of Cheney, and it also includes some exploration of others in his orbit. One of the more intriguing of these figures is Cheney's wife, Lynne Cheney, who is portrayed in the film by Amy Adams. The film mostly focuses on her husband during his various stages of time in power, and therefore doesn't dive too deeply into what's going on with the Cheney family these days. So what's Lynne Cheney doing in 2018?

Although she is best known for serving as the Second Lady of the United States from 2001 to 2009, Lynne Cheney has actually worn a number of different hats over her varied and lengthy professional career. For starters, she holds three degrees from three separate universities: a Bachelor's Degree from Colorado College, a Master's Degree from the University of Colorado, and a Ph.D. in 19th century British literature from the University of Wisconsin. From 1983 to 1986, she was the editor of Washingtonian Magazine, and from 1986 to 1993 she served as the chairman of the National Endowment for the Humanities, according to the American Enterprise Institute, a conservative think tank where she is a senior fellow.

Beginning in 1994, Cheney served on the board of directors for Lockheed Martin; a position she maintained until her husband became Vice President in 2001, according to Washington Business Insider. During that period, from 1995 to 1998, Cheney also performed as an on-air host of the CNN political debate series Crossfire, representing the conservative viewpoint. But despite all of these varied accomplishments, Cheney is arguably best known as an author. She has published no fewer than 14 books, according to her profile on Goodreads. The bulk of her works deal with U.S. history or politics, and include the children's book "A" is for Abigail: An Almanac of Amazing American Women, the political novel The Body Politic, and her memoir Blue Skies, No Fences: A Memoir of Childhood and Family. Her most recent book, published in 2014, is a biography of America's fourth president, James Madison: A Life Reconsidered.

As for what Cheney is up to in 2018, that's a bit more difficult to pin down as she is not active on social media. She hasn't tweeted since 2014, when she was promoting her last book. And she hasn't posted on Facebook since 2016, when she was campaigning for her daughter Liz Cheney's ultimately-successful congressional bid. She has, however, appeared in public at some recent high-profile national events related to the presidency; namely Donald Trump's lightly-attended 2017 inauguration, and former President George H. W. Bush's funeral in Nov 2018. At the latter, she was seated in the front row between her husband and fellow former Vice President Al Gore.

At the age of 77, Lynne Cheney keeps a relatively low profile. But given all that she's accomplished in her career, no one will be surprised if she shows back up again on the political scene soon.