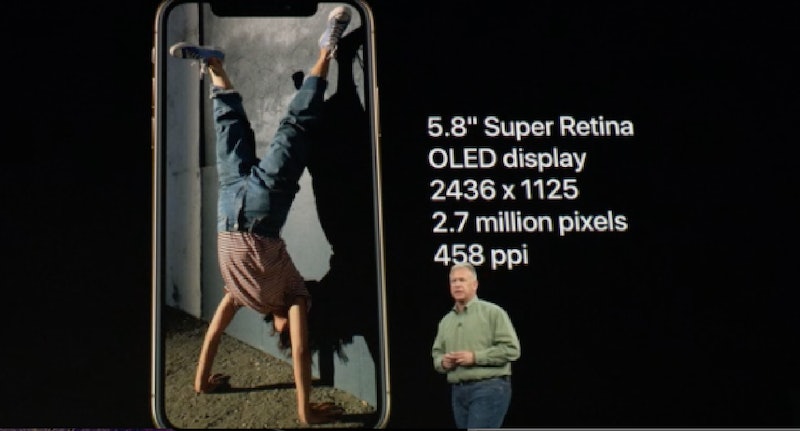 During today’s event, Apple officially announced its new iPhone: the iPhone Xs. After rumors about what's new about the iPhone Xs, today’s announcement confirmed some speculation and added to the hype of this forthcoming phone. You may want to cover your Siri’s ears/microphone because you’re going to have some iPhone envy.

As you may expect, the new iPhone was repeatedly described as “next level” and “beautiful” and “the best yet” and did we mention “beautiful.” This new iPhone follows in the footsteps of the iPhone X, released last year. It’s got features like the all-screen design, Face ID, and notable photo capabilities and screen display that were present in the iPhone X. In addition to being available in two new sizes (the iPhone Xs and the iPhone Xs Max), this new phone also features some notable changes.

The iPhone Xs has the “most durable glass even in a Smartphone,” as Apple stated during the event. It’s also made with a bio-based plastic that is better for the planet. Good news for anyone who a) is prone to screen cracking and b) loves the earth which is likely c) most of us.

This is also the most waterproof phone yet, and can be submerged into 2 meters for up to 30 minutes. Whether you drop it in the pool, the ocean, or even a glass of wine, you’ll be fine.

The battery life of the iPhone Xs extends 30 more minutes than the iPhone X. For the Xs Max, you’ve got an additional hour and a half of battery life. Three cheers for not having to begrudgingly borrow friends’ and strangers’ iPhone chargers.

The iPhone Xs has a 5.8 super retina display, which the event noted is the highest quality display yet. iPhone photographers, get ready to gasp: the photo capabilities of the iPhone Xs are, as Tim Cook would say, beautiful.

New photo editing capabilities allow you to be able to adjust depth of field on your phone. The example used during the event was with bokeh lighting, specifically in a photo with background lanterns out of focus. With the new photo editing on the iPhone Xs, you can bring those blurred background images into focus. The camera has a new sensor with “bigger, deeper pixels.” This true depth sensor helps creating depth in the much-talked about portrait-mode iPhone photos. Basically, you can completely change the composition of a photo with this new photo.

The phone’s Smart HDR is also a brand new and will allow you to add more definition and depth to your photos.

The iPhone Xs display is as big as the iPhone 8 Plus but on a smaller device. This newly announced smartphone will have the same all-screen, edge-to-edge rounded display that was debuted with the iPhone X. The iPhone Xs Max has a brand new 6.5 inch retina display making it the biggest ever on an iPhone. The phone itself is the same size as the iPhone X Plus but with a much larger display.

The wider stereo sound also makes the quality the best to date, Apple officials noted during the event. They showed off the sound quality specifically using a few new video game apps that also showed off the phones augmented reality capabilities.

The iPhone Xs also includes a new chip which helps make its processing power the strongest yet. The new chip, A12 Bionic, helps apps launch up to 30 percent faster and makes its camera processing power even better. So, maybe it isn’t that your device is getting slower, per previous rumors, but that they just seem turtle-like comparison…maybe? Your iPhone camera, though? Definitely, it’s definitely not as detailed as this new one.

The iPhone Xs and iPhone Xs Max will come in three sizes: 64GB, 256GB, and the brand new 512GB, which is enough storage space for 200,000 photos. Blessed news for anyone who has to furiously delete photos in a panic on the regular.

The Apple Event also boasted new iPhone Xs features like its superior worldwide roaming and dual SIM capability, which allows things like keep two phone numbers and two different plans on the same device. That’s particularly good news for people who travel a lot or want to merge their work and personal devices. Apple also noted that the iPhone Xs FaceID is the “most secure facial authentication ever in a smartphone” despite previous speculations about being able to hack Apple’s Face ID.

Apple also announced new Apple Watches that are larger, more efficient, and feature some new and notable design details. Among the new features announcements were customizable watch faces and EKG capabilities. Essentially, the Apple Watch is looking more and more like an iPhone on your wrist.

Overall, today’s Apple event was flashy, as usual, with Mission Impossible-style videos and Tim Cook talking about how “beautiful” the new devices. Also, basketball Hall of Famer Steve Nash was there. So, a pretty typical Apple Event. In his introduction to the event, Tim Cook noted that Apple is about to ship its 2 billionth iOS device. Given today’s new iPhone Xs announcement, that number isn’t slowing down any time soon.