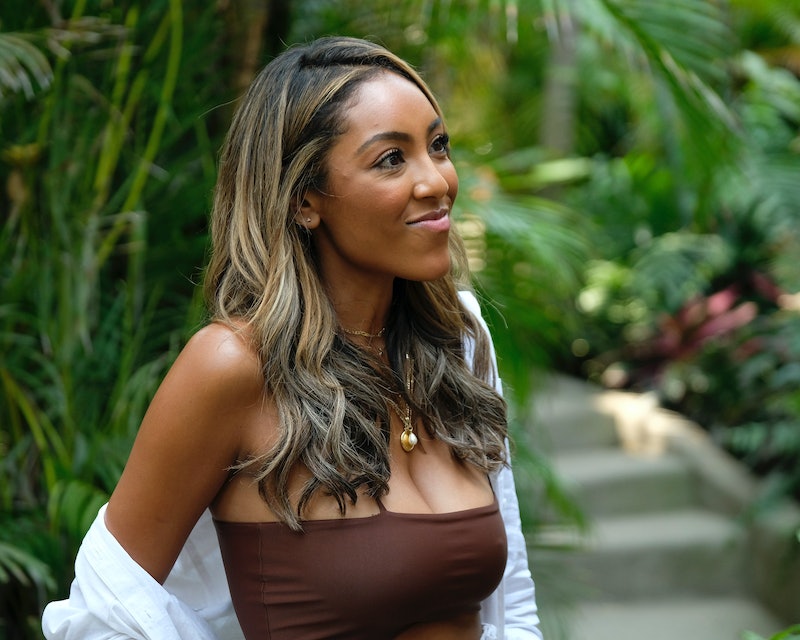 It's been a few months since she had her heart broken on national television, and after Colton's Bachelor season, Tayshia is looking for love again. Only this time she's doing so in Mexico on Bachelor in Paradise. But that's not the only big life change Tayshia has made since Colton's season.

As Tayshia told Vulture in March, she's looking to switch career paths. When she joined Colton's season, she was a phlebotomist, which means she drew blood from patients. However, she's since moved on. "I'm not practicing phlebotomy anymore. I don't know if I'll go back into medicine," Tayshia told the outlet. "As much as I love it and went to school for it, my passion has always been in real estate, development, interior design, and architecture." She added, "I think I'm going to gravitate towards that. I'm currently working at an interior design firm, and I hope this blossoms and opens doors for my career."

It's pretty common for Bachelor Nation stars to leave their jobs after the show, either to try their hand at being an influencer or to transition into a new career field that more closely aligns with their passions. Hey, if you can swing it, go for it.

Besides pursuing a new job, Tayshia's just been enjoying life. After Colton's season finished airing, she shared a lengthy Instagram post expressing gratitude for her journey on the show. She wrote in part:

"Since the moment I stepped into the Mansion, to being greeted so warmly on stage last night, the one true emotion I have felt throughout this journey is Thankful. I don't think people understand the magnitude of vulnerability and faith this journey requires ... But looking back, I wouldn't change it for the world. I have proven to myself that I have a lot to offer, I do deserve to be happy, in love, and to have someone fight for me ... I cant wait for this next phase of my life because I am happier than I've ever been, and my heart is so full knowing that God has someone special out there for me that will give me the unconditional love that I deserve. Look out world, Tayshia 2.0 is comin for ya!"

Tayshia 2.0 is on Bachelor in Paradise, where it seems her journey to find love may not be so smooth. Trailers for the show hint at a love triangle (or pentagon) between her, Blake, Kristina, Caelynn, and Hannah G.

Going into Paradise, Tayshia told ExtraTV that she was interested in Blake (who previously competed on Becca's Bachelorette season), but that she was nervous about potential love triangles. Poor Tayshia didn't even know what was coming her way.

If things go sideways on Paradise, though, at least she'll always have her gals. Social media shows that she's still close with many people from Colton's season. For example, she attended a Navy event in May with Nicole.

And she also went to the Stagecoach festival in April with Kirpa, Catherine, and Alex B.

Bachelor Nation love can be fleeting, but at least the friends are forever.