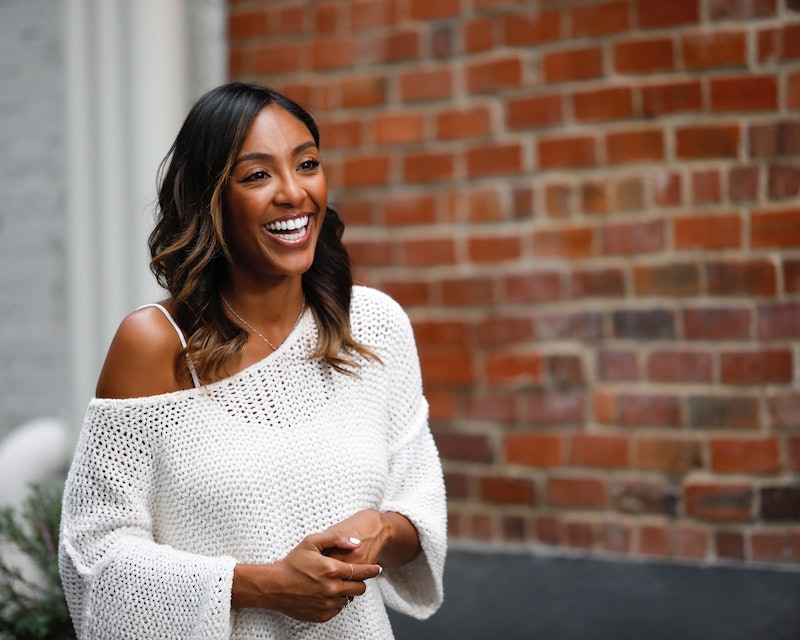 If you've seen the most recent episode of The Bachelor, you wouldn't exactly be surprised if Tayshia wasn't thrilled with how things played out. No one can say for certain what Tayshia thinks of The Bachelor looking back, but given that Colton basically professed his undying love to Cassie while Hannah and Tayshia remained waiting in their respective Portugal hotel rooms, she might have some less-than-stellar feelings.

Let's embark on a quick recap, shall we? After a date with Tayshia, in which Colton says he's falling in love with her, makes plenty of bad virginity jokes, and producers seem hell-bent on setting an ultra-sexy mood, the two head to the fantasy suite. They spend the night talking, Tayshia says, and nothing much else happens. She hopes she's done enough to make her feelings clear.

Then, a short while later, it's time for Cassie's date. She's just been visited by her skeptical father who flew all the way to Portugal to warn her against rushing into things, and she's spooked. She says she's not in love with Colton yet, and so she needs to send herself home. When she tells Colton this, he says he wants it to be her at the end of this, whether they get engaged or not, and that he actually spends his dates with other women thinking about her. Whew. This is where Tayshia might not have been too pleased when she watched the conversation air.

It's totally understandable that Colton might have a favorite partner in mind before he actually eliminates the others. But Colton, if you're so obsessed with Cassie — and thinking of her when you're spending time with other women — don't tell Tayshia you're falling in love with her! You are absolutely not obligated to utter those words.

No one knows what's going to happen now that Cassie has left — a move that spurred Colton to proclaim he was "done" and leap over a fence to escape cameras. But it feels like he can't go back to Tayshia or Hannah and attempt to make amends. They'll know by now that they're a second choice, and that doesn't seem fair to anyone.

Even if Tayshia does have qualms with how everything went down when Colton had to make a choice on The Bachelor, she hasn't said much yet. She's probably not allowed to, given that she's sworn to protect spoilers. But also, maybe she's letting bygones be bygones. She's been sharing photos from the show of her and Colton's dates, and has had nothing but cute things to say. She genuinely seems to care for him as a person.

After her one-on-one with Colton in which she opened up about her divorce, she posted on Instagram about all the ways it moved her. Her caption reads in part:

"It proved that I am stronger than I ever thought I was because I opened up about my biggest “failure” and it made me EXCITED for the life I have ahead of me!!! I owe this revelation to Colton, as he’s the one who challenged me out of my comfort zone and pushed me to want to be the best version of myself. He didn’t just listen to my story, but he comforted, empathized, and respected me, and those are qualities of an amazing man!"

So thankfully, it seems like even if she might be a little hurt by how Colton handled their relationship (who wouldn't be?), being on The Bachelor was still a good experience for Tayshia in other ways.