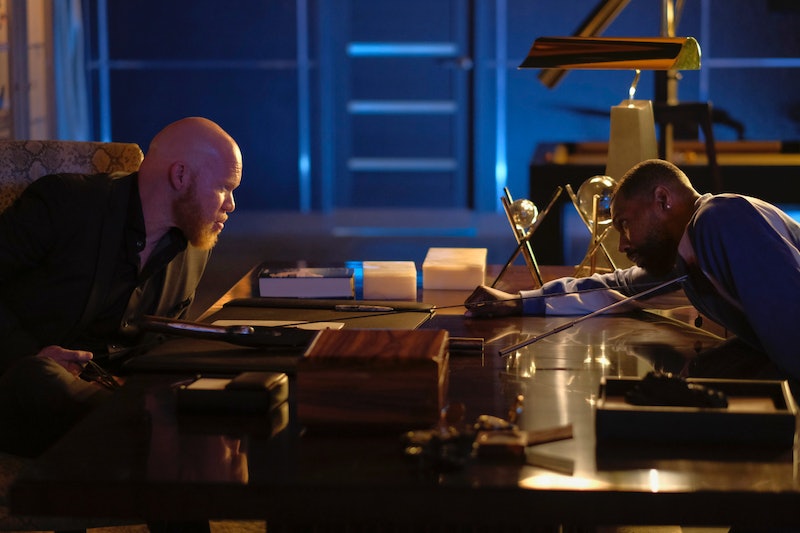 The fictional city of Freeland is plagued with turmoil and ruin nine years after its vigilante superhero mysteriously disappeared on CW's new series Black Lightning. Though he didn’t exactly disappear. Instead the titular hero, a.k.a. Jefferson Pierce, shed his superhero identity in hopes of having a “normal” life with his family, free of bloodshed and crime-fighting. With Black Lightning no longer in the picture, Jefferson was able to become a charter school principal and pillar in the community, promoting education versus vigilantism. Unfortunately, Jefferson plans for normalcy are quickly shot down in the pilot episode when his daughters get tangled up with the 100 gang. Then, he's forced to temporarily come out of retirement. But who are the 100 gang on Black Lightning and why is Jefferson so determined to stop them?

Per the comics, the 100 is a fictional crime organization formerly known as the 10, and later the 1000. When Clark Kent (a.k.a. Superman) first came Metropolis there was a small organization connected to the Intergang that was involved with racketeering, drugs and violence.

The 100 were first led by Albert Talbot, a costumer who dreamed of turning his girlfriend into a costumed villain and who was also taking money from the 100. But when Rose Forrest (a.k.a. Rose and Thorn) discovered that the 100 killed her father, she sought justice and subsequently sent Talbot to prison. For a while after this, the 100 were driven underground, but soon the gang reemerged with Black Lightning’s archenemies Tobias Whale taking the reins.

Tobias used to be a high-ranking politician with hands in plenty of sketchy deals around the city, according to his character description. His flair for crime and corruption sparked his rise to power. But his victory was short lived. Much to his dismay Tobias was soon brought down by Alvin Pierce, Jefferson's father. This fall from evil grace obviously enraged Tobias, and in an act of revenge he murdered Alvin. Unfortunately, his crime antics didn’t stop there. Instead they were driven further underground. Soon the 100 rose to become the most feared gang in the Metropolis, with the harpoon-sporting villain Tobias as their leader.

As Jefferson grew older, he became more and more opposed to the corruption and as a school teacher he spoke out against everything Tobias and the 100 gang did. He kicked one of the 100's drug dealers off school grounds, extensively shaming him and his posse in the process. In retaliation for his perceived disrespect to the 100, Tobias ordered the gang to brutally murder one of Jefferson’s students, Earl Clifford. In turn, Gambi — a tailor and Jefferson’s longtime friend and confidante — suggested that the distraught Jefferson channel his rage and sadness into fighting back against evil in the community without ever revealing his true identity.

With Gambi’s help crafting a specialized suit, Jefferson was able to tap into his innate powers of electrokinesis, shooting lightning and controlling electric currents. After taking on a name inspired by his powers and a paraphrased quote by Milo Sweetman — “Justice, like lightning, should ever appear to few men’s ruin, but to all men’s fear" — Black Lightning was officially born.

Even though the current CW show begins years after the murder of Jefferson’s father, Black Lightning, Tobias, and the 100 pick right back up where they left off. Although, Tobias isn’t exactly sure what he’s dealing with at this point in the series. In the first episode while reprimanding one of his 100 gang members, Latavious, Tobias reminds viewers that he killed Black Lightning way back when — except he didn’t. And now the 100 gang has got a problem.

Jefferson may have suited up once again to save his daughters in the first episode of the series, but will Black Lightning officially come out of retirement? There's no telling at this point, but with the 100 running ragged through Freeland and the community caught in the crossfire, Black Lightning might just need to.